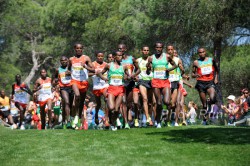 Twenty-two-year-old Ethiopian Imana Merga achieved the greatest triumph of his young career at Punta Umbria, Spain on Sunday. In addition, he greatly assisted his team achieve an important milestone. Last year, Kenyan runners had won all four individual titles at the World Cross-Country Championships and on Sunday it looked as if they could repeat this. However, following the success of Vivian Cheruiyot in the women’s race and wins for Geoffrey Kamworor and Faith Kipyegon in the junior events, Imana Merga upset the field by winning the 12-kilometer men’s competition. 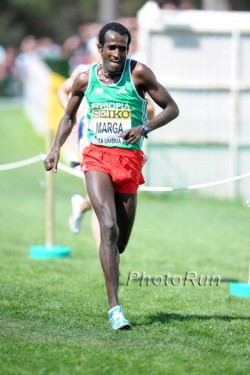 Eleven runners comprised the leading group in the men’s race on the wooded course, which was held in sunny and warm spring weather. By the 6K mark, all of Kenya’s six-man team were part of this group in addition to two Ethiopians: Imana Merga and Hunegnaw Mesfin. Yenew Alamirew, who had made headlines during the indoor season when he won the 3,000-meter event in Stuttgart (Germany) in 7:27.80 minutes, becoming the third-fastest runner of all time indoors for the distance, was in the eight-strong Ethiopian squad but was ultimately not selected in their starting six.

Yet it was the Ethiopian pair who seized the initiative at the start of the fifth lap. ”We both felt good and so we decided to increase the pace,” Imana Merga later explained. However, the pace soon turned out to be too fast for Hunegnaw Mesfin, leaving his compatriot to contend with four Kenyan rivals: Paul Tanui, Vincent Chepkok, Geoffrey Mutai, and Mathew Kisorio. “But I was confident that I would win the gold, so I increased the pace still further,” he added. While the world-class marathon runner, Geoffrey Mutai fell back around 500 meters from the finish, the three remaining Kenyan runners stayed in contact until shortly before the finish line, though none could do anything to counter Imana Merga’s final kick. The Ethiopian won in 33:50—two seconds ahead of Paul Tanui. Vincent Chepkok (33:53) took the bronze ahead of Mathew Kisorio (33:55) and Geoffrey Mutai (34:03). The team competition was won by Kenya ahead of the Ethiopian and Ugandan squad.

Imana Merga’s victory was a surprise. In fact, the Ethiopian’s last win in a cross-country race dates all the way back to December of 2009. His greatest success internationally before Sunday’s win was a fourth place in the 10,000m final at the 2009 World Championships in Berlin (Germany). “I’ve always seen myself more as a track runner but now I’ll definitely run more cross country races in future,” said an elated Imana Merga.

The highest-placing non-African runner was Australia’s Craig Mottram who finished 21st in 35:33. The leading European was Moroccan-born Ayad Lamdassem (Spain) who came in as 16th in 35:12. 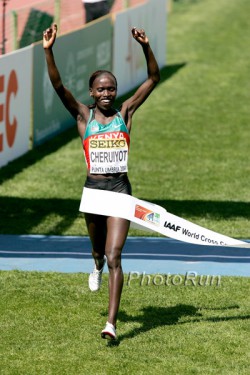 After two consecutive silver medals at the World Cross-Country Championships, Linet Masai’s goal in Punta Umbria was clear: to win the title. This looked even more possible considering that last year’s winner Emily Chebet did not qualify for the Kenyan team. On the second-to-last lap, Linet Masai, the world 10,000m champion, began to break up the field by increasing the pace. But Vivian Cheruiyot, the 5,000m gold medalist at the 2009 World Championships, was able to go with her. Linet Masai had won almost every cross-country race against her rival. Primarily a 10,000m specialist, Linet Masai had previously demonstrated her stamina at the Kenyan Trials and the Bupa Great Edinburgh Cross-Country meet (Great Britain) in the beginning of January.

Yet in Punta Umbria on Sunday, Linet Masai couldn’t reach the gold medal. On the final lap, Vivian Cheruiyot was able to break away, crossing the finish line in 24:58, nine seconds ahead of her compatriot. Vivian was the junior champion at the 2000 World Cross-Country Championships. She won an impressive eight medals during her world cross-country junior career, but until Sunday, she had never finished higher than eighth in the women’s senior race. “I’m delighted with the win because I’d never won a medal of any kind [in the senior race] before,” Vivian Cheruiyot said afterwards.

Behind Linet Masai the contest for the bronze was quite a surprise: Shalane Flanagan of the United States made up ground on the final lap and went past Meselech Melkamu (fourth in 25:18), nearly catching Linet Masai. The 29-year-old American finished third in 25:10, adding this outstanding performance to her Olympic bronze medal that she won in the 10,000m event in Beijing (China). 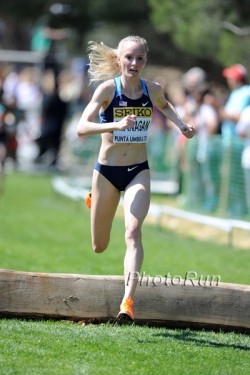 Shalane Flanagan on her way to the bronze medal. © www.photorun.net

Shalane Flanagan is the first non-African medalist at the World Cross-Country championships since Benita Willis (Australia) won the title in Brussels (Belgium) in 2004. She said afterwards that her marathon training had made her a stronger runner. Shalane’s marathon debut was last November in New York City when she ran in 2:28:40 hours to second place. Her success in Spain helped the U.S. team take home the bronze medal in the team event. Kenya took gold, while Ethiopia settled for silver—exactly the same placing as last year’s championships. Shalane Flanagan finished 12th overall and was the top non-African female in that race. You can read more about Shalane here on our Web site.

British runner Charlotte Purdue achieved a notable performance: the 19 year old took home the honors as the fastest European runner with 14th place in 26:03—only 65 seconds behind the winner.

Geoffrey Kamworor of Kenya dominated the 8K junior men’s race to win in 22:21. Thomas Ayeko (Uganda/22:27) and Patrick Mwikya (Kenya/22:32) finished second and third respectively. The highest-placing Ethiopian junior, Bonsa Dida, was fourth in 22:39. The
18-year-old Geoffrey Kamworor went to the front early and controlled the race. On the last of four laps, the young talent broke away from his rivals. Isaiah Koech (Kenya), who had made headlines with world-class times during the recent indoor season, finished 10th in 23:10. Kenya was the clear winner of the team prize. Ethiopia defeated Uganda to take second place.

Ethiopia’s women juniors were definitely stronger in the 6K event. However, Kenya’s Faith Kipyegon, only 17 years of age, won the gold medal. After finishing fourth at the 2010 World Cross-Country Championships, she came in first on Sunday. Her winning time was 18:53. At the end, Faith Kipyego outsprinted Ethiopians Genet Yalew and Azemra Gebru (both 18:54). Their performance helped Ethiopia win the team prize over Kenya and Japan. Despite the catastrophic situation at home following the earthquake and tsunami in northern Japan, a full complement of teams competed in all four races and the Japanese athletes’ extraordinary commitment was rewarded with a bronze medal.