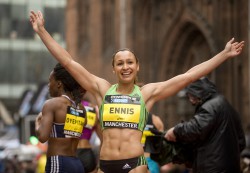 Imagine it. For five days, a big city closes one of its busiest shopping streets—to turn it into a temporary track on which some of the best sprinters in the world will compete!

It’s no dream: it actually happened in Manchester, in the north of England, in May when the city hosted a track meet called the “Great CityGames”—one part of its heralded “Great Day of Sport.” Deansgate, in the heart of the city center and normally thronged with shoppers, became a 150-meter showcase for sprint ace Tyson Gay and World Champion heptathlete Jessica Ennis.

And the unique “Great Day of Sport” concept, which aims to inspire people to lead healthier lifestyles, succeeded in delighting both athletes and spectators.

The overall event began at 10 a.m. with the Bupa Great Manchester Run, a 10-kilometer road race. Thirty-eight thousand participants entered this year, making it one of the biggest 10Ks in the world. The runners were sent on their way in staggered starts that spanned more than two and a half hours—and by the time the last runners crossed the finish line, many in the first corrals had completed the race and were in the stands to cheer them on.

The turnout for the Manchester events was incredible. Approximately 200,000 spectators came to show their support despite cool temperatures, wind, and occasional rain. Every participant, from enthusiastic jogger to world-class athlete was applauded. At the track meet, competitors were even cheered on by marathon world-record holder, Haile Gebrselassie, taking a breather after competing in the Great Manchester Run.

Besides running, many participants in the Bupa Great Run Series do their best to raise money for charity and give back to the community. Their efforts typically generate more than £28 million (45 million US-Dollar) annually for a number of charities. In Manchester alone, £3 million (4.8 million US-Dollar) was raised for good causes this year. 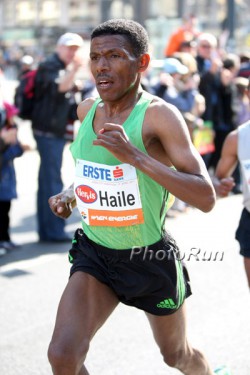 Haile Gebrselassie, seen here at the Vienna Half Marathon 2011, couldn’t resist watching the unique track race after his victorious participation at the 10K. © www.photorun.net

Haile Gebrselassie became a four-time winner of the Great Manchester Run, crossing the finish line this year in 28:10 minutes. “The event has a wonderful atmosphere—it’s one of a kind,” he said. ”There’s the road race in the morning and the track meet in the afternoon.” Despite rain, he stayed to watch track events.

“Something special always happens when I come here,” said Haile. At the debut edition of the Powerade Ion4 Great CityGames two years ago, Jamaican sprint superstar Usain Bolt set a world record of 14.35 seconds for 150 meters (held on a straight without a bend). A year later, Tyson Gay (USA) set a similar world best time for 200m with 19.41. Tyson was once again the top sprinter in Manchester this year. “I like running the CityGames in Manchester because the atmosphere is relaxed and I don’t feel any pressure,” he explained. “It’s the ideal trial competition for me before the start of the season. What’s more, I could never run a 150-meter race like this anywhere in the USA.”

Tyson didn’t have the greatest start out of the blocks on Deansgate, but he still powered past his three rivals while approximately 3,000 enthusiastic spectators watched from either side of the track as well as in local pubs, cafes, and various shops. Some spectators stood on window ledges on the upper ground floor, while others watched from windows higher up. In the pub at the end of the track where the photographers were positioned, soccer games from the English Premier League were on television for the fans as well. This time, Tyson ran 14.51 seconds, crossing the finish line in front of Manchester’s 111-year-old library. 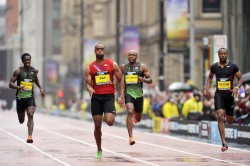 Tyson Gay won the 150 meters in Manchester. © Great CityGames/Pete Langdown
From there, he made his way into the improvised press room in the foyer of an office building, walking past packed rows of spectators who didn’t have to pay a penny to fill the pavement alongside the track. Just as Haile Gebrselassie and other running stars had done, Tyson signed autographs, took time for photos, and shook many hands. The Great CityGames gives spectators the chance to get close to the stars in a way which isn’t possible in a traditional stadium.

The event also reaches out to spectators who normally don’t follow athletics. Many of those who watched Haile Gebrselassie and Tyson Gay had never set foot in a regular stadium. Getting new fans excited about the sport is one of the goals of the organizers of the games. “When we’re racing in Manchester, we’re running in a more elevated position than usual, almost running past the heads of the spectators,” said Great Britain’s Olympic 400m champion, Christine Ohuruogu. “In the stadium they are much further away, much too far. Here on the street and right up close they can get a much better impression of the kind of performances we’re producing. I think it’s a great idea, bringing track and field from the stadium onto the street. Manchester is unique.”

The origins of the Deansgate event trace back to the Commonwealth Games, which were a resounding success when they were held in Manchester in 2002. The city wanted to leave a kind of legacy for athletics. They turned to Nova International, the company that also stages the world’s largest half marathon in Newcastle, to put on the Bupa Great Manchester Run. Then former world-class distance runner and one of Nova International’s founders, Brendan Foster, got the idea to stage sprint competitions on a track in the city center. Manchester was the ideal venue, because the city council was enthusiastic about athletics following the Commonwealth Games. 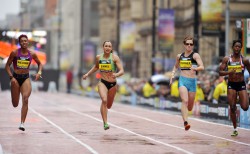 Amazingly, a 300-meter section of Deansgate was closed to traffic from early on Thursday to midday on Monday. The complex construction of the track takes about a day and a half, including having to compensate for a one-and-a-half-meter variation in height along the length of the street. At the start of the track, the athletes are consequently running as if they were on a stage. At the end, they are at normal street level. The spectators are as close as a few meters away from the runners. Laser measurements ensure that all four lanes are level and just as in a stadium, the installation of an overhead camera on rollers provides high-quality television pictures.

The Manchester experiment is now in its third year and it works so well that representatives from the US athletics federation, USATF, have already taken a close look at it. However, the event requires a very high degree of effort and expense and the “Great Day of Sport” in the North West of England is only possible because the city, sponsors, television, and—of course—the organizer, Nova International, partner so successfully.

By the evening of the races, the famous Deansgate track has been dismantled. By midday on Monday, traffic flows again—and old as well as new fans of Manchester running have to wait another year for the magic of track and field to return.

But that’s not all. Between the morning and afternoon’s road and track races, the organizers offered yet another fascinating sports competition: the British Gas Great Salford Swim, which takes place over a mile of open water. Approximately 2,000 swimmers participated, including a number of world-class athletes. Like the runners in the Great Manchester Run, the swimmers in the Salford Swim race got underway in staggered starts.

And perhaps best of all, it wasn’t just Manchester that enjoyed the truly “Great Day of Sport.” The entire program was broadcast live on national television for five hours by the BBC—and watched by more than two million television viewers.