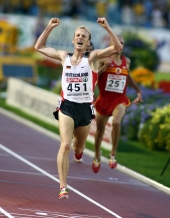 Four years after Dieter Baumann won a silver medal in the 10,000 meters at the European Championships in Munich, another German runner provided a sensation at the current continental championships: 29-year-old Jan Fitschen won the gold medal in Gothenburg, Sweden, with a personal best of 28:10.94 minutes, a victory that could well be the biggest surprise of the whole European Championships.

With his win in Gothenburg, Fitschen achieved something that his former idol, Baumann never did, as Baumann was twice second in the longest track race at the European Championships. The unexpected triumph of Fitschen evokes memories of Baumann’s gold-medal performance at 5,000m in the 1992 Olympics. “With 200 meters to go, I knew that I was able to win the race,” said Fitschen, who passed the leading Spaniard José Manuel Martínez on the homestretch. (Martinez finished second in 28:12.06.) “Just before the finish, I looked back on the track, then looked to the video wall, raised my arms and thought: that can’t be true,” Fitschen said.

Thirty-two years after Manfred Kuschmann was the European champion while representing the German Democratic Republic, Germany again has a European champion at this distance. “It was exactly my race, not too fast and not too slow,” Fitschen said. “I knew that I would have a good chance in the final sprint in that sort of race. But I never dreamt about winning a gold medal.”

Fitschen ran running bravely against the clear pre-race favorites from Spain and the European cross country champion, Sergey Lebid of Ukraine. For most of the race, it looked as if Fitschen would finish fourth, but in the last lap Jan Fitschen passed Switzerland’s Christian Belz, who came in fourth in 28:16.93, then Spain’ Juan Carlos de la Ossa (third in 28:13.73) and, finally, Martinez. “I was able to save some energy by always staying a bit behind the leaders and running in the middle of the field,” said Fitschen. “Then I felt that I slowly make my way to the front.”

“If you would have told me before that Jan would be the winner here, I would have thought you are mad,” said Fitschen’s coach, Tono Kirschbaum, who also coached middle-distance runner Rüdiger Stenzel in the 90s. “I became more and more optimistic from lap to lap,” Kirschbaum said. “At the end I nearly collapsed on the stands.” An eighth-place finish “would have been good as well,” the coach said.

During the winter, Fitschen skipped the World Indoor Championships in favor of preparing for Gothenburg at high-altitude training camps. “There were some critics afterwards, but it was the right decision,” said Kirschbaum. “It was just his fourth 10,000m race in his career. We thought he would have better chances compared to the 5,000m race,” said Kirschbaum.

Interestingly, Fitschen once had to withdraw unintentionally from an indoor world championship before, and Dieter Baumann played a role on this occasion. In 2001, Baumann had been banned internationally for doping, but not domestically. At the German Championships, Fitschen and Baumann competed against each other; the IAAF then banned Baumann’s competitors, too. Bitterly disappointed, Fitschen had to watch the 3,000m race from the stands. It would have been his first big international competition. Now, after his biggest success in Gothenburg, he said: “I am not the new Dieter Baumann of Germany, no, I am the new Jan Fitschen of Germany!”