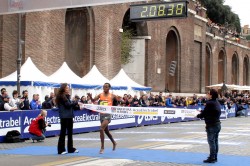 Siraj Gena honors the past in Rome. © www.photorun.net

It was an Ethiopian triumph in Rome this past weekend—a fitting end to the commemoration of the Olympic Marathon held there 50 years ago. On that occasion, Abebe Bikila of Ethiopia ran barefooted to win the gold medal in Rome. In a tribute to Bikila, the winner of Sunday’s race, 25-year-old Siraj Gena, removed his shoes 300 meters before he crossed the finish line in 2:08:39 hours. Ethiopia also provided the women’s champion: returning champion Firehiwot Dado who clocked 2:25:28.

After 35 kilometers, Siraj Gena and Benson Barus (Kenya) had broken clear of the eight-runner lead pack. Three kilometers later, the Ethiopian picked up the pace yet again. This surge proved decisive and gave him enough time to remove his shoes at the end. Gena improved his marathon best by over two minutes with his win in Rome. Last year, he finished ninth in Frankfurt (2:10:41). Barus finished second in 2:09:00. Nixon Machichim (Kenya) was third in 2:09:08 and Kedir Fikadu (Ethiopia) took fourth place in 2:09:15.

Firehiwot Dado didn’t have time to remove her shoes. The outcome of the women’s race was much closer than the men’s—a mere ten seconds separated the first three finishers. Firehiwot won in 2:25:28 with a long kick for home. Haile Kebebush (2:25:31) and Mare Dibaba (2:25:38) finished second and third respectively. 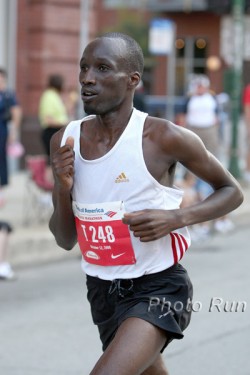 Defending champion, Wesley Korir and Edna Kiplagat, both from Kenya, were victorious at the Honda Los Angeles Marathon on Sunday. Korir won the 25th edition of the race in 2:09:19, while Kiplagat won in 2:25:38.

The course leads runners from Dodger Stadium, through Hollywood and Beverly Hills, to the finish line near the Santa Monica Pier. Approximately 25,000 runners took part in the race which was held in excellent conditions.

During the final miles, Korir was able to pull away from his competitors and gain a decisive lead. Behind him, fellow Kenyans Richard Limo (2:09:48) and Paul Samoei (2:09:54) took second and third place respectively. Laban Kipkemboi, a member of the KIMbia team, placed fourth in 2:10:40. Kipkemboi had dictated the pace during parts of the race.

In the women’s race, Edna Kiplagat was able to separate from the lead group during the last 6K. Russia’s Silvia Skvortsova had set the pace prior to that. Kiplagat broke the tape in 2:25:38. Besides winning the women’s race, Kiplagat also was victorious in the “Challenge” against the race’s fastest man. For many years the women’s race begins ahead of the men’s. Whoever crosses the line first secures an additional bonus. The women were afforded an 18:74-minute head start. The second-fastest women was Teyba Naser (Ethiopia/2:26:20), third place went to in 2:27:20.