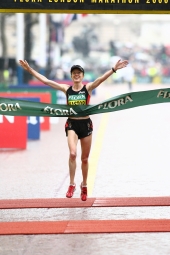 The best elite field ever in the Flora London Marathon produced spectacular results and a big surprise. While Kenyan Felix Limo reached the finish at the Buckingham Palace after 2:06:39 hours, Haile Gebrselassie finished ninth in his third marathon with a time of 2:09:05. The highlight of the day was achieved by American Deena Kastor, who finished in 2:19:36 hours and set a new continental record. She is now the fourth fastest marathon runner in the world. Her result is as well a new world lead while Limo missed that mark by just one second. A total of about 35,000 runners started the race in Greenwich. More than a million spectators lined the course.

Before the race there were rumors about Haile Gebrselassie trying to break the world record. Five days after his 33rd birthday the Ethiopian, who has already set 20 world records in his career, ran promising split times within the leading group. The world record seemed to be in reach. Kenyan Paul Tergat had run 2:04:55 hours in Berlin 2003. But then the race turned tactical and became slower. When the defending champion Martin Lel increased the pace about 5 kilometers from the finish Haile Gebrselassie couldn’t follow and dropped back. Clocking 2:09:05 hours, he said this was the worst result in his international career which had begun in 1991.

The race was then decided on the home straight next to Buckingham Palace. Felix Limo won a dramatic final sprint against his opponent Martin Lel, who finished second with 2:06:41. Third was Hendrick Ramaala (South Africa) in 2:06:55. Limo had won Berlin, Chicago and Rotterdam before. „When I had seen the starting list, I thought this would be good for me. Since there were so many stars in it I was not under any pressure. I was sure that it would become a tactical race and that is always best for me,“ the 25 year-old Kenyan explained. He earned 105.000 US-Dollars in London. Besides Gebrselassie Limo also beat the Olympic Champion Stefano Baldini (Italy), who finished fifth in 2:07:22, and world champion Jaouad Gharib (Marocco), who finished eighth in 2:08:45.

Deena Kastor became the eighth woman in history to have broken the 2:20-hour barrier in the marathon. With her time of 2:19:36 she now is the fourth fastest woman ever. Only world record holder Paula Radcliffe (Great Britain/2:15:25), Catherine Ndereba (Kenya) and Olympic champion Mizuki Noguchi (Japan) are ahead of her in the all-time list.

Six days after Boston the London Marathon was the second stop of the new World Marathon Majors Series (WMM). For the victory in London and Boston the winners earned 25 points each for the jackpot race of the WMM. In a two years period the best man and woman will be awarded one million dollar to split in between them. In fall the races in Berlin (24th September), Chicago (22nd October) and New York (5th November) are to follow.

But the London Marathon is not only about top performances. 46,936 runners had registered for the 26th edition and over 90,000 had applied for a bib number. 35,000 were expected at the finish. Despite rainy weather probably more than a million people lined the course to cheer on elite and fun runners. Charity running plays a major part in London as well. 78 percent of the runners collected money for charities. The charity aspect is as important as nowhere else in the world. Annually many million Pounds for Charity are collected during the London Marathon. The total amount donated in the history of the race is about 250 million Pounds.