The Half-Marathon Races in Lisbon, New York, and The Hague 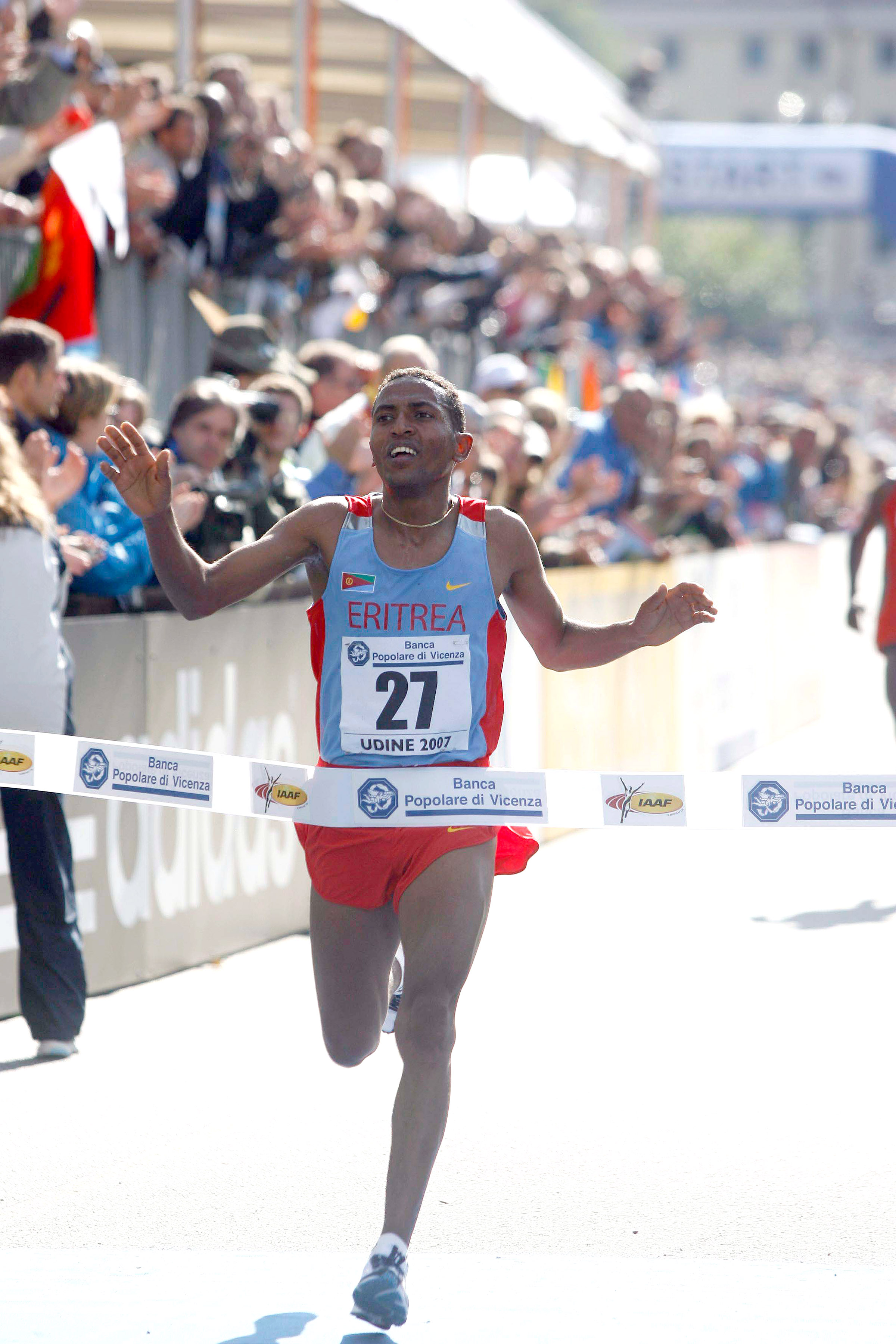 Zersenay Tadese, seen here at the 2007 World Half Marathon Championships, won by a big margin in Lisbon. © www.photorun.net

It’s now a tradition that in the weeks before the renowned April marathons—including the World Marathon Majors (WMM) events in London and Boston—a series of highly competitive half marathons take place. The races in Lisbon, New York, and The Hague provided some thrilling finishes. The best results came from runners who specialize in the half-marathon distance.

This year, many top athletes opted out of the half marathon—such as defending Boston champion Robert Kiprono Cheruiyot, fellow Kenyan Patrick Makau, Germany’s Irina Mikitenko, and the current women’s WMM champion, Liliya Shobukhova of Russia. Instead, they decided to focus their efforts on full marathons in April.

On the other hand, runners such as Ethiopia’s Aberu Kebede and the United States’ Kara Goucher incorporated the half-marathon tune-up into their marathon-training plans.

The fastest half-marathon time of the spring racing season came from Zersenay Tadese who finished within seven seconds of his own world record—a performance all the more impressive since he ran three-quarters of the race alone. The 29-year-old runner from Eritrea won the 21st edp Lisbon Half Marathon on March 20 in 58:30 minutes. His performance was the second-fastest half marathon ever recorded and put him in first place on the world half-marathon list this year. A year ago, Zersenay Tadese won the same race in Portugal in 58:23.

The point-to-point course led a field comprised of over 6,000 runners across the beautiful 25th of April suspension bridge (Ponte 25 de Abril), offering fantastic views at the start. The 3.2K bridge spans the Tejo River and links the Lisbon suburb of Alcantara with the town of Almada.

In warm and sunny spring-like weather, Zersenay Tadese, a former cyclist turned four-time half-marathon world champion, went to the front of the field from the start. It was immediately evident that the pacemakers were unable to maintain the pace for as long as it had been planned. On his own after 5 kilometers with just the clock to beat, the 29 year old went through 10K in 27:42—just three seconds slower than he ran last year. But the former world cross-country champion was forced by occasional headwinds to slow down in the closing stages, losing precious seconds.

Zersenay Tadese, who will not be running a marathon this spring, left his rivals far behind. John Mwangangi of Kenya finished second exactly two minutes later (60:30). Silas Sang (Kenya) took third place in 60:38.

The fastest woman was last year’s real,- Berlin Marathon champion, Aberu Kebede. The Ethiopian, who will run the Virgin London Marathon on April 17, won in 68:28 minutes ahead of Ana Dulce Felix. The Portuguese runner’s time of 68:33 was a national record and looks now hopeful towards the upcoming Vienna Marathon, where she will debut at the 26.2-mile distance. Following her across the finish line, a Kenyan duo also went under 69 minutes: Grace Momanyi was third in 68:41 while Pauline Njeri finished in 68:55. 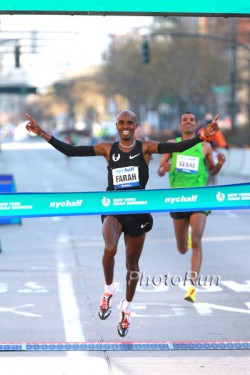 Mo Farah triumphed in New York after a close race to the finish with Gebre Gebremariam. © www.photorun.net

Britain’s Mo Farah ran a good half-marathon debut in New York City on March 20, winning in 60:23. His victory put him at the top of the European list for the year. The 2010 double European champion, who won gold in the 5,000 as well as the 10,000 meters at the European Championships in Barcelona, broke the British record, which had stood for 25 years. The former world-record holder in the marathon, the Welshman Steve Jones, had run 60:59 at the 1986 Great North Run in Newcastle (Great Britain). After this debut, Mo Farah stands a good chance of improving the European half-marathon record, which belongs to Spain’s Fabian Roncero (59:52 set in Berlin in 2001).

In cool weather, more than 10,000 participants crossed the finish line in New York. The course led through Central Park and past Times Square. They were cheered to the finish by thousands of spectators and 18 live bands along the course.

“I’m in the best form of my life. Recently I’ve increased the volume of my training by quite a lot compared to what I used to do,” said the 27 year old, who left Somalia’s capital Mogadishu as a 10 year old with his family and sought asylum in Britain. He has recently moved to live in the U.S. and joined Alberto Salazar’s training group. It’s clear that, at some time in the future, Mo Farah will make his debut at the marathon. However, with an eye on the World Championships this summer and the 2012 Olympics in London (Great Britain), the 10,000m event remains his priority. 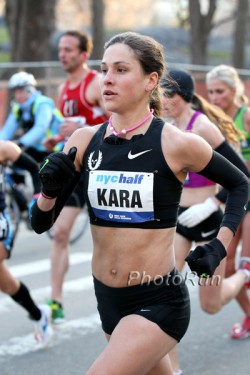 In New York, Mo Farah defeated Ethiopia’s 2009 world cross-country champion, Gebre Gebremariam, by two seconds, winning with a strong finishing kick. The Ethiopian crossed the finish line in 60:25 and showed that he is in very good form before running the Boston Marathon on April 18. Third place went to Mo Farah’s new training partner, Galen Rupp (USA) who ran 60:30—he was able to catch up with the front of the field quickly following a fall at halfway.

The women’s race shined with a course record and the outcome was also left in doubt until the closing stages. Caroline Rotich of Kenya broke away from her compatriot Edna Kiplagat and American Kara Goucher with approximately 400 meters remaining, winning in a personal best of 68:52. Edna Kiplagat was eight second behind and third place went to Kara Goucher (69:03), who is preparing for the Boston Marathon after giving birth to a son at the end of September.

She also finished inside the old course record of 69:25, set by Britain’s Mara Yamauchi a year ago. “It would have been great to have won—but the race for me was still a step in the right direction,” said the 32 year old.

Five Runners Go Under the Hour in The Hague 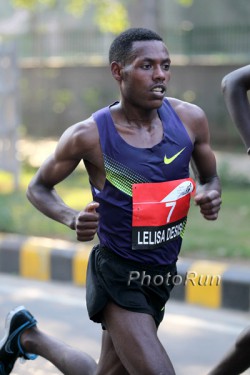 Lelisa Desisa, seen here in New Delhi in 2010, placed first in The Hague with a personal best. © www.photorun.net

One week earlier, five runners broke the prestigious one-hour barrier at the 37th edition of the ABN AMRO CPC Half Marathon in The Hague, Netherlands. The fastest of the five was Lelisa Desisa of Ethiopia, who won in 59:37 minutes. With 30,000 participants when taking into account all competitions held in conjunction, this half marathon is arguably one of the most popular half marathons in the world.

Lelisa Desisa, who is only 21, first made a name for himself when he finished seventh at last year’s World Half-Marathon Championships in China. He then improved his personal best to 59:39 at the Airtel New Delhi Half Marathon in November. The race in The Hague ended up being a close contest. The runner-up was fellow Ethiopian Azmeraw Bekele in 59:39 and third, just one second behind, was Peter Kirui of Kenya. Ayele Abshero (Ethiopia/59:42) and Lucas Rotich (Kenya/59:44) finishing fourth and fifth respectively went under 60 minutes, while James Kwambai (Kenya) finished sixth in 60:01.

The women’s race winner, Kenya’s Filomena Chepchirchir, broke the 70-minute barrier, running 69:06. She was followed by Tsgereda Girma (Ethiopia) in 70:30 and Joyce Kandie (Kenya) in 71:50.