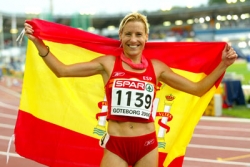 Ukrainian Sergey Lebid won the European Cross Country Champion- ships for the seventh time over the weekend, regaining the title he lost last year. In Toro, Spain, Lebid produced an impressive performance while the Spanish could celebrate a home win for Marta Dominguez in the women’s race.

For a long time, Lebid followed the tempo of the leading group in a tactical race over 10.7K. The Ukrainian tightened the screw just 600 meters from the finish, leaving behind the Swedish steeplechaser Mustafa Mohamed, who had previously led, and giving his other rivals no chance. Lebid crossed the line in 31:47, good for a 9-second margin over Mohamed. Third was the Portuguese Rui Silva in 31:58.

“It wasn’t easy because I knew my rivals would be able to finish fast,” Lebid explained. “That made amends for the disappointment of last year.” Lebid had stomach problems then and failed to win. It wasn’t quite a complete revenge on Sunday, because the British title holder Mo Farah was absent because of injury.

It was a similar case of a race for revenge among the women, and the winner also went clear on a long run for home. Dominguez burst free around 600 meters from the finish of the 8.2K race. The margin was a good deal tighter than with the men. The 32-year-old Spaniard, European champion over 5,000m in both 2002 and 2006, reached the finish in 26:58, three seconds ahead of Julie Coulaud (France). Third was Rosa Maria Morato (Spain) in 27:04. “My plan was to run behind the leaders initially to shelter from the wind. It went right to plan,” Dominguez said.

KIMbia’s James Koskei won both the men’s title and the race-within-a-race “gender challenge” at the Dallas White Rock Marathon. Along with three others, he passed eventual women’s winner Emily Samoei just past the 24-mile mark; the lead women had been given a headstart of 18 minutes and 35 seconds. Koskei, who finished in 2:15:02, won $10,000 for the men’s race and $25,000 for the gender challenge. Samoei finished in 2:34:24. The win was a nice bit of year-end vindication for Koskei, who dropped out of the brutally hot Chicago Marathon in October. He was also fourth at the Boston Marathon in April.

Dieudonne Disi Fastest of 40,000 in Lagos 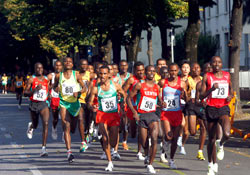 For many years the half marathon in Lagos, Nigeria has been among the biggest 13.1-milers in the world. Around 40,000 athletes were on the start line this time, including those participating in all the competitions on offer, in hot and humid conditions. The half marathon race attracted a high-class field, although the weather made fast times impossible.

“It’s a pity I couldn’t break the course record of 62:21. But this victory is still a big Christmas present for me,” said Disi. The 29-year-old had already created a stir at the World Road Race Championships in October when he finished the half marathon in 59:32 for sixth place. There was no stopping the Kenyans in the women’s race. Linet Chepkirui won in 72:06 over Mary Keitany (75:10) and Irene Kipchimba (75:21). The Ethiopian winner of the Chicago Marathon, Berhane Adere, was fifth in 75:34.

Kenyan Jimmy Muindi has won the Honolulu Marathon five times. Last year he was foiled in his bid for victory number six by the Ethiopian Ambesse Tolossa. On Sunday, Muindi was looking for revenge in a re-run of their duel, but the Ethiopian messed up his plans once again. Tolossa won in 2:17:26 over Muindi (2:18:53) and Eric Mzioki of Kenya (2:21:32). The race played out nearly identically to last year’s, with Tolossa waiting until about four kilometers from the finish before attacking and leaving Muindi well behind.