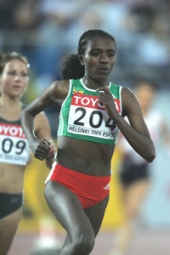 For a long time it had been only Haile Gebrselassie who snapped away the gold medals from the Kenyans. But in the course of his triumph, a group of world class athletes developed. The one best known is Kenenisa Bekele, who meanwhile took both world records at 5,000 and 10,000m from his role model Gebrselassie. The Ethiopian women also reached world class standard. But it took them longer than the men, although Derartu Tulu already won the Olympic 10,000m gold in Barcelona in 1992. 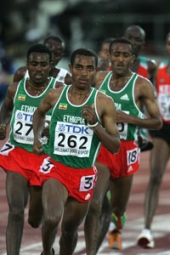 Haile Gebrselassie surely has a big share concerning the enormous development of the Ethiopian long distance runners. But he wasn’t the first successful Ethiopian runner. In 1960 and 1964 Abebe Bikila had won the Olympic marathon; four years later his countryman Mamo Wolde did the same. But there was a big gap until the next big victory—and the first who triumphed on the track was Miruts Yifter. He won the 5,000m as well as the 10,000m in 1980. Haile Gebrselassie achieved Olympic victories on the track years later.

In the years before Miruts Yifter, the Ethiopians collected some vital coaching knowledge. And German runners and coaches played a major part in this. “Yes, you can say that the German coaches have done quite a contribution to the Ethiopians success,” confirmed Jos Hermens. The Dutch manager of Gebrselassie and Bekele is close with the Ethiopians for many years.

There were not many possibilities for altitude training for GDR runners 30 years ago. Ethiopia was the priority, due to its political direction and because of the landscape. First contacts were made by the army of the GDR. So for a long time only athletes from the army-track-club in Potsdam (ASK Potsdam) were allowed to fly to Ethiopia. Middle distance runners like Olaf Beyer and Jürgen Straub or later the race walker Ronald Weigel and the marathon runner Uta Pippig travelled to Addis Abeba before their prime season.

When the German athletes trained in the stadium of Addis Abeba, the Ethiopian coaches were standing next to them and noted the whole training session while the stop watch was in their hand. Later an exchange developed. Ethiopian coaches and athletes came to Potsdam for training camps and they competed in the GDR meetings. Furthermore, a lot of African coaches studied in Leipzig at the University for Body Culture (DHfK). “Among them was also the current Ethiopian head coach for distance running, Dr. Woldemeskel Kostre,” explains Jos Hermens.

The Ethiopians still work with a centralized system, partly comparable to former GDR’s system. All athletes normally come together to Addis Abeba before the big championships. Participation at the lucrative meetings in Europe is restricted by the officials. And those who don’t stick to the rules will not be nominated for the Olympics or the World Championships.

In recent years, the Ethiopian runners profited from international managers like Jos Hermens. “I have supported the Ethiopians in a way that their athletes concentrate on preparing their properly—I want that they are successful. A centralization helps, but it surely works also with an individual preparation,” said Jos Hermens, who believes that the Ethiopians have much more potential. There is no system for spotting talents as in the GDR, but competitions in schools increased during the past years. Talents were sighted and supported. “You have to realize, that the country starts to open. There is more electricity and thus also more communication. Through this much develops, also in the sport,” said Hermens. “Normally there should be even much more successful Ethiopians, because Kenya has 30 million people and Ethiopia has 70 million.”

The Ethiopian medal chase is not yet finished in Helsinki. At least in both the 5,000m finals the East-African runners are favorites.