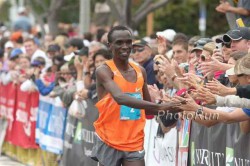 Eliud Kipchoge, seen here at the Carlsbad 5000 in 2010, also celebrated a win in Edinburgh. © www.PhotoRun.net

Kenya’s Eliud Kipchoge and Linet Masai dominated the “Bupa Great Edinburgh International Cross Country” in Great Britain over the weekend. The event attracted approximately 3,500 spectators amid wonderful winter conditions with fresh snow and sunshine along a tough course in Holyrood Park. Despite unfamiliar conditions for the African runners, Kenyan and Ethiopian athletes took the first three places in each of the individual races. Mo Farah of Britain took top individual honors in the inaugural team competition with the pre-race favorites, the European team, defeating the United States and Great Britain.

For many years, Edinburgh’s Holyrood Park has been a showcase for one of the best-quality cross-country races in the world. The various competitions held there attract several thousand spectators. Holyrood Park, which is located practically in the center of Edinburgh, is a very demanding and varied course, which makes it a significant challenge for the athletes. The events are also shown live in Great Britain on the BBC’s number-one channel, attracting on average of over five million viewers whenever world-class and leading British athletes compete in there. The event on Saturday was one of the series of “Bupa Great Run” races in Great Britain. The organizers also stage the world’s largest half marathon in Newcastle, each year held in September. At this year’s contest, the concept of the competition was changed. The traditional 9K men’s run was held for the last time in 2010 and was replaced by a 4.2K race as well as a new team challenge.

This decision was made in part, because the British public likes the idea of a multi-national competition. Organizers also wanted to give up-and-coming runners the chance to gain experience at big international races.

The 4.2-kilometer distance with an international field was a new venue this year. Given the short distance, quite a few fast middle-distance men were involved as well as the 3,000m Olympic Steeplechase champion, Brimin Kipruto. However, Eluid Kipchoge took immediate command once the starting gun sounded. The 26-year-old Kenyan—the 2003 World champion over 5,000 meter and second in the 2008 Olympic Games for the same distance—went into the lead almost from the start. At the halfway point, just four athletes were able to follow him: training partner Brimin Kipruto, Olympic 1500m champion Asbel Kiprop of Kenya, and Steve Vernon—who was in particularly strong form—and Tom Lancashire of Great Britain.

Eluid Kipchoge increased the pace up a sharp climb and split the group apart. As he ran downhill, he had a lead of a few meters over Asbel Kiprop, who was followed by Brimin Kipruto. Steve Vernon and Tom Lancashire fell behind. Eluid Kipchoge crossed the line in 13:12 minutes—six seconds ahead of Asbel Kiprop. Brimin Kipruto was third in 13:19, Steve Vernon finished fourth (13:21) ahead of Tom Lancashire (13:29) and the European 1500m champion, Arturo Casado (Spain/13:37).

“I expected a good performance, because my training had gone very well. It is a good sign for the year,” said Eluid Kipchoge, who had planned to set a strong pace from the start. He did not only decide on this tactic because of the fast-finishing middle-distance runners in the field. “I always take every opponent serious—the Kenyans as well as the best Europeans,” he said. “But it was very challenging to run on the snow, because obviously I cannot train for this in Kenya.”

Eluid Kipchoge won the first 8K Cross-Country race held in Edinburgh in 2005. The humble son of a Kenyan farmer will now prepare for two indoor competitions in February. He’ll run the 3,000m in Stuttgart and plans to compete in the 5,000m in Düsseldorf before he decides whether or not he’ll run the Kenyan trials for the World Cross Country Championships. “The big goal will be the 5,000m at the World Championships this summer,” he announced.

Surprisingly, a marathon specialist set the pace for much of the 5.7K women’s race. Initially only four runners could follow Spain’s Allessandra Aguilar: the Kenyan pre-race favorites Linet Masai and Vivian Cheruiyot (world champions for 10,000 and 5,000m), Genzebe Dibaba (younger sister of the double-Olympic champion, Tirunesh Dibaba), and the Briton, Hattie Dean. But near the half, a pair of younger British runners, Charlotte Purdue and Steph Twell, had closed the gap.

After 4K, Linet Masai began to push the pace and put distance on the field. Going into the final lap, she had a solid lead which grew steadily. Behind her, Genzebe Dibaba caught up with Vivian Cheruiyot, ultimately winning the contest for second place. Behind Linet Masai (20:24 minutes), Genzebe Dibaba finished in 20:32—four seconds ahead of Vivian Cheruiyot. The big surprise in the race was a fourth-place showing for Charlotte Purdue. The 19-year-old European Junior Cross-Country champion ran a great race (20:49), defeating Hattie Dean (21:00), Allessandra Aguilar (21:24), and Steph Twell (21:38). Kenya’s Commonwealth champion in the 3,000m Steeplechase, Milcah Chemos, had to withdraw before the start due to illness.

“It was hard to run on snow, because I’m not used to it. Additionally the opposition was very strong, so I wasn’t that confident before the race,” recalled Linet Masai.“Now I want to finally win the gold medal at the World Cross-Country Championship in March, because in the past two years I ended up with silver.” According to the International Athletics Federation Web site (IAAF), Linet was first inspired to run by her elder brother Moses, whose success helped their family. 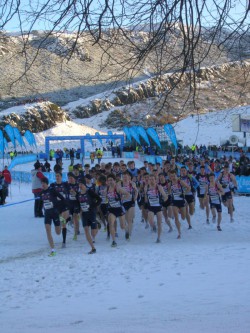 Wintry conditions in Edinburgh—just before the start of the “Team Challenge.” © Take The Magic Step®

The teams going into the inaugural race consisted of nine athletes each representing Great Britain, the United States, a European selection, as well as a development squad of promising young British athletes. The top-six finishers from each team counted in the points scoring. Europe scored 50 points, finishing just ahead of a strong American team (53). Great Britain (69), and the British development squad (164) came in third and fourth respectively. Mo Farah was the fastest individual runner.

After a slow start, approximately a dozen athletes formed the leading group. Galen Rupp, the U.S. team captain, was the first to pick up the pace. The European Cross-Country champion, Sergiy Lebid (Ukraine), Mo Farah, who did not run the European Cross-Country Championships in December, and the Spanish runner, Ayad Lamdassam, were able to stay with Galen Rupp. Later Mo explained, “I had planned to start a little slower and keep an eye on [Sergiy] Lebid and the others.” Mo Farah, Britain’s 2010 European champion in both 5,000m and 10,000m, initially broke away from his followers with a strong increase of his pace on a hill. Going into the final lap, he held his lead and finished in 25:41 minutes, a few meters ahead of Galen Rupp (25:50), Ayad Lamdassam (25:55), and Sergiy Lebid (26:00).

“This was quite a change compared to my recent training in Kenya. In Iten, I was running at altitude of 8,000 feet [Editor’s note: approx. 2,440 meters]. Here it was slippery and we had snow. Both conditions make it very tough,” said Mo Farah afterwards. He will run either the 3,000m or 5,000m at the indoor meeting in Birmingham next month. The British runner will then decide whether he will defend his European Indoor title over 3,000m or prepare for the World Cross Country Championships.