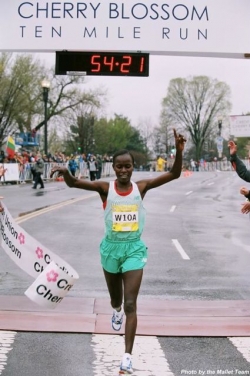 KIMbia runners took the top spots in the men’s and women’s races at the venerable Bay to Breakers 12K in San Francisco. John Korir and Lineth Chepkurui triumphed over the massive field of 65,000 in the 97th edition of the hilly race.

Chepkurui continued her winning spring ways. The 20-year-old added the Bay to Breakers title to her win two weeks ago at the Bloomsday 12K and her victory at the Cherry Blossom 10-Miler in April. In San Francisco, she dominated the women’s field, running 39:20 to finish well ahead of countrywomen Rose Kasgel (40:45) and Jane Kibii (41:42).

Europeans were victorious at the Manchester 10K in England. While the Austrian Guenther Weidlinger took the men’s race, the Briton Jo Pavey was the fastest woman. Both won against high-class African opposition.

The 30-year-old Weidlinger, who has lately been concentrating more on the longer distances rather than the steeplechase and recently achieved the Olympic qualifying time for 10,000m at a meet in California, ran a clever, tactical race. In the early stages he let the marathon world champion Luke Kibet (Kenya) and Mark Carroll (Ireland) set the pace. Neither played any part in the outcome. Kibet was fifth in 28:21, and Carroll dropped back to twelfth place. Up front an exciting contest developed between three men, with Weidlinger prevailing in a sprint finish. The Austrian won in 28:10, one second ahead of the European cross country champion Sergei Lebid (Ukraine). Third was the Somali-born Swede Mustafa Mohamed—also a steeplechaser—in 28:12. “This was a great success for me because the conditions were difficult, windy and the field was top-class. But I was confident I would win,” said Weidlinger.

Pavey also won in Manchester against an array of high-class African marathoners. The world marathon champion Catherine Ndereba (Kenya) and her compatriot Margaret Okayo, whose victories include the London, Boston and New York City marathons, lost contact with the leading group early on. Ndereba came in seventh in 32:55 after she had at least overtaken Derartu Tulu (Ethiopia/eighth in 32:56). Okayo finished well down the field. The outcome was decided in Jo Pavey’s favor only in the latter stages as she drew away from Rose Cheruiyot. The Briton finished in 31:58, crossing the line ten seconds ahead of the Kenyan. Third was Bezunesh Bekele (Ethiopia) in 32:33. “This win gives me a lot of confidence for Beijing since I’m planning to run 10,000m at the Olympics,” said Pavey.

Mikitenko in a Class of Her Own Once More

Irina Mikitenko continues to prove unbeatable in this Olympic year. Four times the German start has stood on the start line, and she has won on every occasion. At the age of 35, the mother of two is enjoying the best early season of her career. After a course record in the Paderborn Half Marathon in March (68:51), there followed the greatest success of her career in April: a surprise triumph in the London Marathon in a German record of 2:24:14. Just over two weeks ago she became German champion over 10,000m in a solo run, and over the weekend, Mikitenko won by a handsome margin the Avon-Running Women’s Race in Berlin, which attracted 13,048 participants.

She ran 32:24 for the 10K course in Berlin’s Tiergarten, the second fastest time ever in the 25 editions of the race. “For me the race was a training run,” said Mikitenko, who finished well in front of Melanie Kraus (33:23) and Carmen Siewert (35:07). For much of the first half, she ran with Kraus, who two weeks ago won the Duesseldorf Marathon. But no one, including Kraus, was surprised when Mikitenko pulled away. Mikitenko was running at a different level, Kraus explained, but she herself was delighted “to be running the marathon with her in the Olympic Games in Beijing.” In winning so easily, Mikitenko missed the course record of Restituta Joseph (Tanzania), which has stood for seven years. But she wasn’t too upset, explaining afterward, “I didn’t know what the record was; otherwise I could have broken it.”

Paula Radcliffe, the women’s world record holder for the marathon, has suffered a second injury setback in this Olympic year. The English runner has been reduced to walking on crutches because of muscular problems in her hip. Despite the injury Paula Radcliffe, who set the current world record of 2:15:25 in London in 2003, remains optimistic about her chances in the Olympic Games. “Of course it’s not the ideal situation in an Olympic year. But Paula is confident and believes she can continue her training for Beijing after a break of one to two weeks and will be ready for the Olympics,” said her manager Sian Masterton.

The 34-year-old, who won the New York Marathon last November after the birth of her daughter, had suffered a toe injury at the beginning of the year, and had to withdraw from the London Marathon. Two weeks ago Radcliffe started having pain in her left hip. A second examination showed that a muscle had been dislodged and put pressure on the bone. With the help of crutches and rest, Radcliffe hopes to sort the problem out.

The English runner had only just recently been saying that her training for the Olympics was going well. “I have some catching up to do at the Olympics. I hope I can achieve what I’m capable of,” Radcliffe said at the beginning of May. In Athens four years ago she experienced the worst moment of her career. She went into the marathon as the strong favorite but dropped out in torrid heat. The Olympic champion Mizuki Noguchi (Japan) is once again looking like one of her toughest rivals.