Double Ethiopian Triumph in Thrilling 37th Edition of the BolderBOULDER 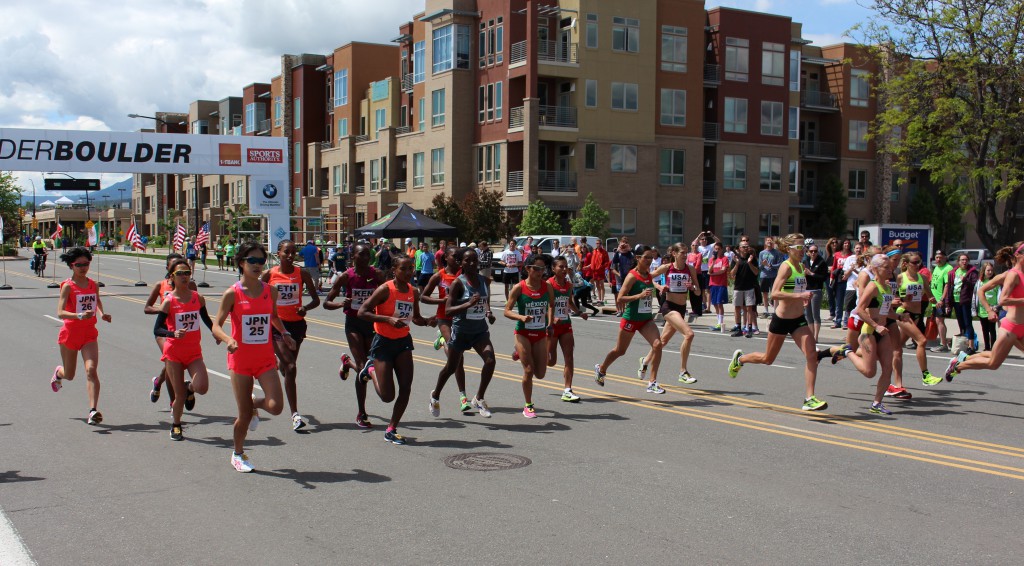 The start of the women’s race of the International Team Challenge with Eritrea, Ethiopia, Japan, Kenya, Mexico, the USA, and the Commonwealth competing. © Oliver Hoffman

Ever since 1979, there has been one 10K in Colorado that has perfectly captured the magic of what it means to be a runner: the BolderBOULDER. This annual event, which takes place on Boulder’s beautiful spring roads on Memorial Day, has always been a perfect mixture of exciting racing, warm camaraderie, and outstanding crowd support, and on Monday, all of these elements were in full bloom.

The scenic event—the seventh-largest road race in the world—kicked off precisely at 6:50 am with the start of the professional wheelchair division. Under sunny skies and in somewhat chilly temperatures, a total of 96 waves comprising over 50,000 runners took to Boulder’s streets. Many of the competitors donned costumes for the festive occasion and high-fived spectators or gave friendly waves along the course that winds through one of Colorado’s most beautiful cities. The race finishes in style, with the runners completing a partial lap around the University of Colorado’s Folsom Field amid the deafening roar of the stadium crowd. 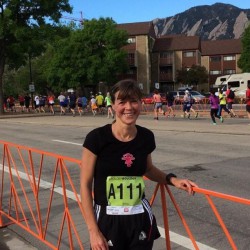 …after Uta finished her run in the citizen’s race. © Take The Magic Step®

Among them, supporting her fellow runners, was Take The Magic Step’s own Uta Pippig, who said afterwards, “We had ideal weather conditions today. They felt fantastic after so much cold and rain this month. So it was of no surprise that many runners celebrated personal bests.”

Both winners of the wheelchair division were repeat champions, with Josh George coming across the finish line tape first in 23 minutes, 21 seconds. Josh had triumphed in last year’s race. The women’s wheelchair winner was Amanda McGrory (27:08), and she, too, was the 2014 winner. Josh and Amanda are both members of the U.S. Paralympic team.

And in the non-professional citizen’s race, Air Force pilot Ben Payne triumphed on the men’s side with an impressive 30:40 win. True to the spirit of Memorial Day, Ben wore a bib with names of friends and relatives who died fighting for their country. Brittni Hutton was the female citizen’s race winner with a 34:46 finishing time. 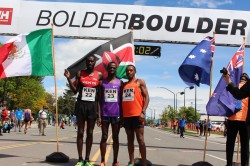 Lani Rutto, Allan Kiprono, and Isaac Mukundi Mwangi of Team Kenya. After two 1st and one 2nd place in the past three years, Allan finished third after a courageous race. © Oliver Hoffmann

The professional races were the finale. In addition to the open division, these top-class runners wore the singlets of their home countries as part of the International Team Challenge. Belete Assefa of Ethiopia was the first male runner to break the finish line tape in 29:04.13—adding to his 2011 victory here—with fellow countryman Solomon Deksisa second (29:20.72). The third person on the podium was Team KIMbia’s own Allan Kiprono of Kenya (29:33.75), who is coached by Take The Magic Step’s Dieter Hogen. The top American was Bobby Curtis (29:42.87) who placed fourth overall.

“Today was good,” Belete told the Daily Camera after the race. “[To] the American people—thank you so much. From the start to the finish you clap your hand for me.” 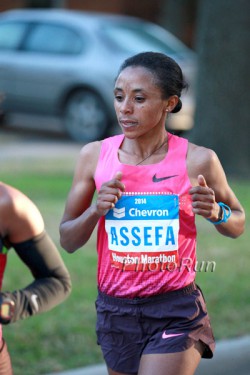 The women’s race went to yet another Ethiopian contender, with Meskerem Assefa crossing the finish line first in Folsom Field in 33:31.09. The two-time Olympian scored her first BolderBOULDER win thanks to a late-race injection of pace with more than a mile left to go that overpowered Kenyan rival Risper Gesabwa. Meskerem’s fellow countrywoman Amane Gobena secured second in 33:37.61, followed by Risper, who came in 11 seconds later for third. Top American honors went to Mattie Suver (34:25.41) who placed fifth.

Though running can sometimes feel like a solitary endeavor, this was certainly not the case on the streets of Boulder today. The annual BolderBOULDER event supports both the local and the worldwide community in numerous ways. One example of this is illustrated by all the volunteer running coaches from the BBRacers Club, an organization that helps more than 2500 children from over 90 Colorado schools to train to walk, jog, or run the BolderBOULDER race. 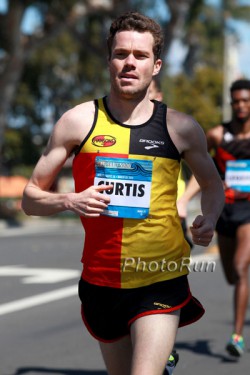 Bobby Curtis, seen here at the 2014 Carlsbad 5000, was the fastest American runner in the elite men’s field. © www.PhotoRun.net

Not to be missed on Monday, was a group of special runners who were part of Achilles International, an organization that assists vision-impaired competitors to take part in road races thanks to volunteer guides. This year’s edition of the BolderBOULDER event marked the first time that organizers endorsed the adaptive program that allowed guides and runners to participate together. Taking part was elite ultrarunner Krissy Moehl of Boulder who was there to serve as a guide. “This is literally a hands-on shared experience,” she told the Denver Post before the race. “I think it will be a cool way to do the BolderBOULDER… If you run for yourself and you have a win or a PR, that’s one sense of joy, but when you can share it with other people, it’s so much greater.”

Afterwards Uta paid tribute to all those who made BolderBOULDER so special once again. “It felt like everyone from Boulder who could run participated and it was a thrill to finish again in the famous Folsom Field,“ she said.

“Congratulations to all the finishers—the young and the young at heart—and to the teams who participated in the International Team Challenge.”