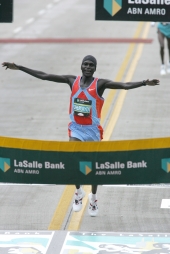 With a cold start, but a steady pace, the 2006 LaSalle Bank Chicago Marathon ended with some unanswered questions.

A big concern at this year’s race was the pacing. In 2005 the pace went out too slow. The year before, too fast. But this year the four pacemakers (all athletes from KIMbia Athletics) were right on pace through 30 kilometers. At the mile mark Richard Kiplagat and Sammy Kipketer towed the field through in 4:50 minutes, which is exactly 3:00 per kilometer—the desired pace. At halfway, Kiplagat and Kipketer brought the field through in 63:10 and then turned the pacing duties over to teammates Luke Kipkosgei and Charles Munyeki. The lead group of 12—including KIMbia athletes Ben Maiyo, John Yuda, Thomas Kiplitan and Charles Kibiwott—was tightly packed behind the two pacemakers. But the race changed between miles 17 and 20.

The tough 3-mile stretch into the wind took its toll on the athletes and by 20 miles only five runners remained in the lead pack. Eventual winner Robert Cheruiyot, Daniel Njenga (2nd), James Muindi (3rd), Abdi Abdirahman (4th), and Robert Cheboror (5th) had broken the rest of the field. The last mile was a battle between Cheruiyot and Njenga—every time Cheruiyot made a surge, Njenga would answer. But with 200 meters to go Cheruiyot pulled away for the last time. However, as he was about to cross the finish line he slipped on the timing mat and went straight down to the ground, hitting his head on the pavement. His shoe chip registered 2:07:35 hours, but there was controversy as to whether or not his torso had crossed the line. Cheruiyot remained on the ground for several minutes and was eventually taken off in a wheelchair before knowing the outcome of the race.

“Robert might have a mild concussion, but he’s going to be alright,” said race director Carey Pinkowski. Later, Cheruiyot was declared the winner when replays showed that his torso and timing chip crossed the plane of the finish line. Njenga, a Kenyan who trains in Japan, finished five seconds back in 2:07:40. Muindi (2:07:51) could not stay with his two countrymen over the final kilometer, but had put enough distance on fourth place finisher Abdi Abdirahman (2:08:56) at that point to cruise to the finish.

In the women’s race, last year’s winner Constantina Tomescu-Dita went out very strong, gapping the field by two minutes at the halfway point and carrying on that lead through 30 kilometers. But then the wheels feel off as the chase pack closed the gap. By 35K her lead was cut down to one minute. By 40K she was two minutes behind Berhane Adere and Galina Bogomolova, and would fade to fifth place (2:24:25). Like the men’s race, the two lead women ran stride for stride over the final mile with Adere pulling away around the final bend. Her time of 2:20:42 to Bogomolova’s 2:20:47 was very impressive considering the cold and windy conditions. Australia’s Benita Johnson finished 3rd in an Australian National Record time of 2:22:36. Kathy Butler ran a strong race to finish 9th in 2:28:39. Elva Dryer, in her first attempt at the marathon distance, finished 12th with a 2:31:48.

To watch the video of Cheruiyot slipping at the finish line, click here.