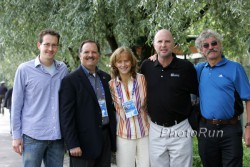 The most important city marathon races have merged to the Big Five. This was announced by the race directors during the World Championships in athletics in Helsinki.
The BAA Boston Marathon, the real,- Berlin Marathon, the LaSalle Bank Chicago Marathon, the ING New York City Marathon, and Flora London Marathon are included in the Big Five and form this ,Formula 1’ of road running.

Uta Pippig is one of the few athletes who has won three of these five races: Boston, Berlin and New York.

The regulations are not fixed yet. “We are at the beginning of our planning. But we have brought together the five most successful marathon races. We are competitive and proud events and we will make something of this together,” said Mary Wittenberg, the race director of New York. “We intend to create something like the Major series in golf or the Grand Slam in tennis. We want to make the marathon more attractive for the public. We intend to reach more media interest through the whole year,” Berlin’s race director Mark Milde said.