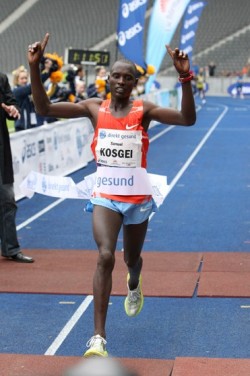 Samuel Kosgei and Mary Keitany of Kenya both broke the world record in the 25K at the 30th anniversary edition of the BIG 25 Berlin. It was the first time in history that both winners of the same road race broke world records. Cheered on by enthusiastic spectators, Kosgei crossed the finish line in 1:11:50 in Berlin’s Olympic stadium, while Keitany took advantage of the ideal weather conditions in order to become the first woman to break 1:20 with her time of 1:19:53 hours. Over 10,000 runners from 47 countries registered for the race, which took them past Berlin’s historic sites like the Victory Column, the Brandenburg Gate, Potsdamer Platz and the Kaiser Wilhelm Memorial Church.

The elite field made good use of ideal weather conditions with temperatures hovering between 54 and 57 degrees Fahrenheit, overcast skies, and little wind. A lead pack comprised of about 20 African runners reached the first 5 kilometers in 14:29 minutes. This early section of the race is slightly downhill, but the group maintained a fast pace in subsequent splits. They crossed the 10K point in 29:01 and covered the third 5K in only 14:04. The leaders reached 15K in 43:05, but by then the pack had dissolved. The race then became a duel between Samuel Kosgei and his compatriot Gilbert Kirwa, who had won last year’s Frankfurt Marathon in the world-class time of 2:06:14. From time to time the defending champion, Matthew Koech of Kenya, joined them at the front, but he dropped back and eventually finished fifth in 1:13:45.

The fast pace continued between 18 and 21K even though the course has a slight uphill section on the way back to the stadium. It’s worth mentioning that Samuel Kosgei was Haile Gebrselassie’s pacemaker in the 2009 Berlin Marathon and ran with him to 30K in 1:27:49 which has since been ratified as a world record. Both he and Gilbert Kirwa reached 20K in 57:22 and ran 60:42 for the half-marathon.

The 24-year-old Samuel Kosgei was able to break clear over the last two kilometers and improve the world record of his compatriot Paul Kosgei (Kenya), who had run 1:12:45 to win Berlin in 2004, by almost a minute. Gilbert Kirwa ran well under the old mark, finishing second in 1:11:58. Terefe Maregu (Ethiopia) finished third in 1:13:16. A total of seven runners finished inside 1:14 hours and among them was the athlete whose world record was broken: Paul Kosgei ran in the lead group until almost 15K before finishing sixth in 1:13:48.

“My aim was to run 1:12. But I never thought I could run under that time. Now I’d love to make my marathon debut in Berlin,” said Samuel Kosgei afterwards. Looking forward to the Berlin Marathon, Kosgei made it known that he’s out to race Gebrselassie.”If Haile Gebrselassie is going to run in Berlin again, I would be delighted to run against him. My aim would be to beat him,” he said. 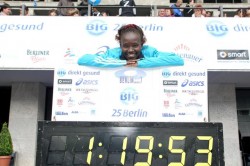 Mary Keitany breaks the world record on her 25K debut and achieves a landmark. © www.photorun.net

The world half-marathon champion, Mary Keitany, ran her own race from the start. Led by two pacemakers she reached 10K in 31:58 and then went through 15K in 47:58. After the Kenyan continued to maintain a strong pace on the gentle uphill section, she reached the half-marathon point in 67:38.

The 28-year-old Kenyan took a big chunk off the world record set by the Japanese Mizuki Noguchi (1:22:13) in the course of the Berlin Marathon five years ago. Mary Keitany’s winning time,1:19:53, was almost five minutes faster than Alice Timbili’s (1:24:38). Completing the Kenyan clean sweep of the first three places was Pasalia Kipkoech (1:26:47) who had won the Berlin Half Marathon at the end of March. “I had been preparing specially for this race for a long time and expected I would break the world record—but I never thought I could go under 1:20,” Mary Keitany said afterwards. She is hoping to make her marathon debut this fall. Keitany, who had been inspired to begin her running career by the success of her compatriots Catherine Ndereba and Susan Chepkemei, showed in Berlin that she has the potential to be one of the greatest marathon runners of the future.

“Two world records in one race and achieving a landmark in terms of the women’s time as well—we couldn’t have had a better 30th anniversary race,” said a jubilant Christoph Kopp, the elite race coordinator for the BIG 25 Berlin. The race itself has a storied history. It began on May 3, 1981 with over 3,000 runners and marked the beginning of the running boom throughout Germany. While running in the U.S., Britain and a few other countries had grown in popularity with big city races already established, running in Germany was still in its infancy back then. Until that day, roads weren’t open for runners. There had been attempts by marathon organizers in Berlin and Frankfurt to follow the American model. But it was the French Allied Forces in Berlin who were able to turn dream into reality. They organized the “25 km de Berlin” which became the forerunner of city road races in Germany and today the race is called the BIG 25 Berlin.

A French Army officer, Major Bride, was the first to have the idea for the race. He took as his inspiration the Paris-Versailles 20K. Since the Allied Forces held overriding legal power in Berlin, the police could do nothing to prevent the race going through the city center. The event required a huge effort not only from Major Bride and the supporting organizations, the Regional Sports Federation (LSB) and the Berlin Athletics Federation (BLV), but also for the police. Regardless of these hurdles, everything came together and “25 km de Berlin” became a huge success. In the same year, the Berlin Marathon’s course also went through the city centre.

The highest turnout for the race was in 1990, about six months after the fall of the Berlin Wall. In that race, 14,300 runners from all parts of the world ran through the city. Six world records have been set in its history, which affirms the race as one of the fastest 25Ks in the world.

Thousands Turn Out for the Berlin Avon Running Women’s Run 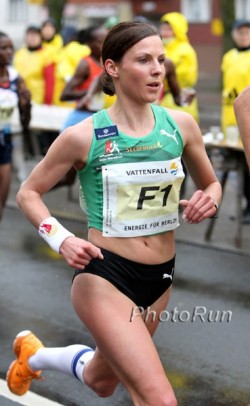 The weather last Saturday—clear blue sky and mild temperatures—couldn’t have been more perfect for Sabrina Mockenhaupt to win her fourth Berlin Avon Running Women’s 10K Run. The 29-year-old German marathoner who runs for the Cologne Marathon Club had previously won the race in 2005, 2007, and 2009. Mockenhaupt’s time, 33:24, was over a minute faster than the second-place finisher, Ingalena Heuck (34:33). Third place went to Carmen Siewert in 35:52.

The scenic race winds through the Tiergarten, a park located in the center of Berlin. Thousands of spectators lined the course, while bands playing samba music gave the runners something fun to listen to.

The turnout for the race, one of Germany’s most popular women’s fitness events, was incredible. Nearly 16,000 women and girls of all ages registered for the three events, which comprised the event: 10K, 5K, and 800m Junior’s Run. In the 5K, organizers hosted a “Run of the Schools” in which numerous female students took part. And like last year, there was a mother/daughter division—a perfect opportunity to celebrate an early Mother’s Day.

A part of the event’s revenues will go to the Berlin Cancer Organization for its education on the prevention of breast cancer.

For many runners, the Berlin Avon Running Women’s Run was their first race. Standing near the finish line, one could feel the energy of thousands of happy runners shaking hands and high-fiving one another.