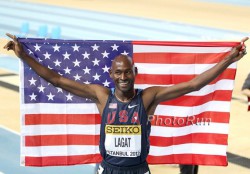 In the men’s 3,000m, Kenya’s Augustine Choge and Edwin Soi shared the lead in the race’s early stages, but the pace did not pick up until the last 1000 meters when Bernard Lagat took off to complete it in fast two minutes and 24 seconds. Bernard’s late-race surge ensured that he never lost contact with his strong East African rivals and in the final lap it was his trademark kick that ultimately prevailed. He covered the last 200m in just 26 seconds—a pace more often seen in 800-meter runners. The American crossed the finish line in 7:41.44 minutes. Augustine Choge was second in 7:41.77, while third place was decided by a photo finish between Mo Farah (7:41.79), and Edwin Soi (7:41.78). Edwin won the duel—then was temporarily disqualified because of obstruction. However, the decision was later reversed after a counter-protest.

“I made sure that I was always well positioned and felt I still had something left at the finish,” said 37-year-old Bernard Lagat, who became the oldest 3,000m champion in the history of the World Indoor Championships—and won the gold medal for the third time in his career. He first triumphed in 2004, and then again two years ago in Doha. “I did it in Turkey and I know I can do it again in London,” said Bernard, looking ahead to his prospects at the Olympics this summer. He has already won two medals at the Games: a bronze medal in 2000 and silver in 2004—both in the 1,500m event. An Olympic victory would be the crowning achievement of his career. 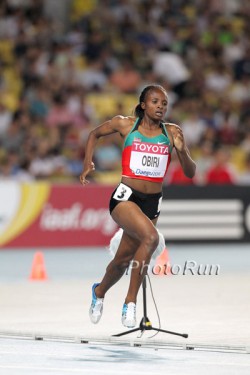 While there was no clear favorite in the men’s race, the women’s event was an entirely different affair. Ethiopia’s Meseret Defar had high hopes for a win, which would have given her five consecutive gold medals at the championships. But it was not to be. Kenya’s Hellen Obiri was able to outrun her to the title in the last few meters (8:37.16). “I didn’t expect that, I am disappointed,” Meseret Defar said afterwards. She crossed the finish line in second place in 8:38.26. Ethiopia’s Gelete Burka (8:40.18) won the bronze in a sprint finish with Sylvia Kibet of Kenya (8:40.50).

Meseret Defar took the lead after just 1,800 meters and then consistently pushed the pace. Going into the final lap, the defending champion was ahead of Hellen Obiri, Sylvia Kibet, and Gelete Burka. However, Hellen surged to the front with about 100 meters to go and went clear of her rivals in the last 50 meters. “I’m so happy to win the gold medal, because it is my first win and also because I defeated Meseret Defar, who is a four-time world champion indoors,” said the 22-year-old who has been competing internationally since 2011 and finished 11th after falling in the 1,500m at the World Championships in Daegu last year. “I hope that 2012 will be my year and I also think I can do something in the 1,500m at the Olympic Games.” 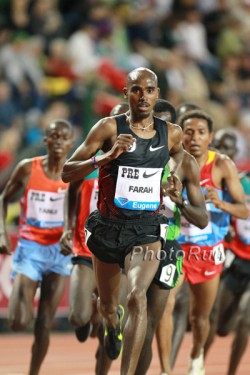 Mo Farah, seen here at the 2011 Prefontaine Classic, finished fourth at the World Indoors, after setting a European record in Birmingham. © www.photorun.net

Going in to the World Indoor Championships, Bernard Lagat had signaled his winning form by his performances during the winter season. He bettered the U.S. indoor record for 5,000m at the Millrose Games in New York on February 11 by approximately four seconds, bringing it down to 13:07.15. Almost simultaneously, Galen Rupp improved Bernard’s national record for two miles (8:10.07) with 8:09.72 in Fayetteville, Arkansas.

In spite of their successful indoor season, Bernard Lagat and Galen Rupp are not at the top of this year’s world rankings for the 5,000m or the two-mile. Kenya’s Thomas Longosiwa ran the only sub-13 minute time for the indoor season at the PSD Bank Meeting in Düsseldorf on February 10, clocking 12:58.67. A Kenyan athlete also leads the rankings for the rarely-run two-mile distance: Eliud Kipchoge triumphed in 8:07.39 at the Aviva Grand Prix in Birmingham, England, on February 18.

The race in Birmingham marked the fall of a record, which had stood for nearly four decades. Mo Farah set a new European best there. In front of his home fans, the British star finished second in 8:08.07, improving the 8:13:2 mark set by the Belgian Emiel Puttemans almost forty years earlier. The fastest 3,000m men’s race of the year took place at the International Indoor Meeting in Karlsruhe: Augustine Choge defeated fellow Kenyan Edwin Soi in a photo finish. Both were clocked at 7:29.94—the only sub-7:30 times of the season.