An elated Lagat points to his new record. © www.photorun.net

Just one week after bringing Madison Square Garden to its feet with his stunning eighth win in the Wanamaker Mile, two-time Olympic medalist Bernard Lagat of the United States broke the U.S. indoor record for 5,000m at the Reebok Indoor Games in Boston. This was another highlight of a series of top quality indoor meetings during the month of February culminating in the World Indoor Champion- ships in Doha (Qatar) from March 12 to 14.

In the thrilling closing stages, Lagat made good use of his finishing speed for a win in 13:11.50 minutes over the Ethiopian duo of Dejen Gebremeskel and Bekana Daba who were both given the same time of 13:11.78. The previous American record, 13:18.12, had been set by former University of Oregon runner Galen Rupp just last year. Rupp was in the race with Lagat and broke his previous record as well in the race.

Afterwards Lagat spoke to the Boston Globe. In the interview, Lagat gave credit to the former U.S. record holder, saying, “I was determined to push it hard. But it wasn’t hard enough until Galen [Rupp] came to push the last 1K. I think we dropped about four seconds from the last K so I think we did a good job.”

Furthermore, Lagat was presented with the Team USA Athlete of the week. Like he did after the Wanamaker Mile at the Millrose Games, Lagat decided to donate his $2500 bonus to the Haitian Relief Fund. 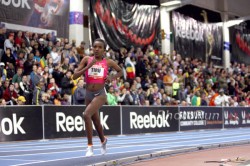 But it was not to be. Early in the race, a vitally important pacemaker dropped out prematurely. Dibaba also suffered muscle cramps during the race. But she was never in danger of being beaten and she did clock 14:44.53 in her first international race of any significance for the indoor season. Sally Kipyego (Kenya) finished second in 14:52.67.

In Stuttgart (Germany), Ethiopian Meseret Defar was going for her own world indoor 3,000m record which she had set with a time of 8:23.72 two years ago at the same meeting. Spurred on by an unexpectedly strong performance from her compatriot Sentayehu Ejigu, Defar ran a high-class time but it wasn’t enough to break the record as she clocked 8:24.46—the third fastest time ever run indoors for the distance. Sentayehu Ejigu, two years her junior, was able to match the favorite stride for stride for much of the race, finishing runner-up in 8:25.27, the fourth fastest time ever. Well behind the Ethiopian pair was the Kenyan, Sylvia Kibet. She took third place in 8:42.15. The Portugese runner, Ines Monteiro finished fourth (8:59.05) while the German marathoner and 10,000m specialist Sabrina Mockenhaupt was sixth in 9:13.72.

Reviewing the fastest times in history for the event shows the full extent of the 26-year-old’s domination: eight of the top 20 times for the 3,000m belong to Defar.

The men’s race over 3,000m was also one of the highlights of the meeting in Stuttgart. The Kenyan Eliud Kipchoge emerged victorious in a personal best time of 7:32.99. This took the 2003 world champion at 5,000m into ninth place for the distance on the world indoor all-time list. Kipchoge won the duel with Tariku Bekele (brother of multiple world record-holder Kenenisa Bekele) while the latter finished in 7:33.81. Sammy-Alex Mutahi of Kenya took third place in 7:37.01.