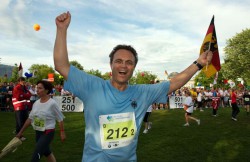 Hans-Peter Friedrich, Germany’s Minister of the Interior, was a member of one of his ministry’s relay squads on the second day of the event. © SCC EVENTS/Camera4

The Berliner Wasserbetriebe 5 x 5-kilometer TEAM Relay, a race organized by SCC EVENTS—the same company that hosts the Berlin Marathon, continues to thrive. When it debuted 11 years ago, 218 relay squads and 1,090 runners took part. The numbers have grown exponentially ever since. This year, 4,717 teams and 23,585 runners turned out for the competition.

The TEAM Relay took place over three evenings from June 22 to 24. It is the largest relay race in Germany—mostly comprised of corporate, government, and sports clubs teams. However, there are also individual groups which participate in the event. Each team receives a picnic basket and a red wine, which was bottled especially for this occasion. A kids race of approximately 800 meters is held before each main event, offering children up to the age of 10 the chance to celebrate running.

Weather conditions varied considerably during the three days of the event. On Wednesday there were heavy rains, but running conditions on Thursday and Friday improved significantly. The mood was festive and upbeat as the teams collected on a meadow near the finish line, which is located next to the German Chancellery.

Ten years ago, then Minister of Foreign Affairs Joschka Fischer competed in many road races, including the real,- Berlin Marathon. This year another minister joined fellow runners on Berlin’s streets: Hans-Peter Friedrich took part in the TEAM Relay through the “Tiergarten” park. He told the SCC EVENTS Web site after the race that he had a great time. His Ministry of the Interior, located next to the race’s course, fielded a total of astonishing 19 relay teams.