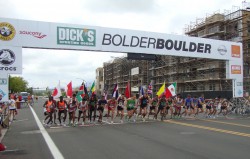 The start of the elite men’s race of the 33rd BolderBOULDER. © Take The Magic Step®/Uta Pippig

There aren’t many road races in the world like the BolderBOULDER 10K. Every year on Memorial Day, tens of thousands of runners, ranging from elite Kenyan and Ethiopian athletes to Elvis impersonators and Lego figurines, take to the streets of Colorado’s famous running city, Boulder.

The traditionally festive event, which happens to be the fifth-largest road race in the world, has been going strong since 1979. Along the route, which winds through the town of Boulder and finishes at the University of Colorado’s Folsom Field, runners are cheered on by tens of thousands of waving spectators and entertained by all sorts of bands. 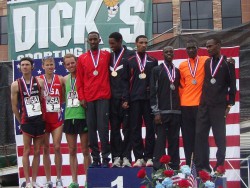 This year, nearly 55,000 runners took part—a new record for the race. Among the crowd, was Uta, the 1993 champion of the event, from our team here at Take The Magic Step® who enjoyed a great 10K with her fellow runners early in the morning, just a few hours before the elite competition. “We had such a great run today, the weather was perfect and the thrilling atmosphere on the course made those hills just disappear. Thank you to the organizers and all volunteers for giving the city the opportunity to enjoy such a great event each year!”

Among the runners, was also the one-millionth participant in the race’s 33-year history: Mieszka Laczek-Johnson, a 35-year-old Iraqi War veteran, who had been told by her doctors that she would never walk again after sustaining a terrible injury there.

She proved them wrong.

Talking with a reporter from the Daily Camera newspaper after the race, Mieszka Laczek-Johnson said she was running the race to honor eight fallen comrades of hers. “I’m running in honor of some very, very wonderful brothers of mine who unfortunately lost their lives in Baghdad,” she said. “I thought this is the perfect way to honor them on Memorial Day. I wanted to do something for them, and here I am and this is absolutely amazing.” 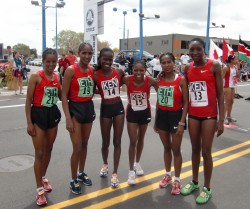 The Ethiopian and Kenyan women’s teams. © Take The Magic Step®

After the citizens race, the elite runners tackle the rolling hills of Boulder. At stake every year is the vaunted International Team Challenge Prize—a source of captivating competition. In the men’s race, Belete Assefa became the third consecutive Ethiopian man to win the race. As he entered the stadium, running around the track to the roar of the crowed, he spread out his arms.

“I heard the crowd and put my arms out,” Belete Assefa recalled. “That’s when I knew I’d won the race,” he told reporters afterwards. 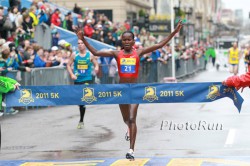 The winner of the women’s race was KIMbia’s Lineth Chepkurui (Kenya) who broke the finish-line tape in 32:30. Her Ethiopian opponent Mamitu Daska came in second (32:35 minutes).

Referring to Mamitu Daska who defeated her at this year’s Bay to Breakers 12K run, Lineth Chepkurui had this to say to USA Today after the race: “It’s so great to look how distantly your friend is behind you.”

In the International Team Challenge competition, Ethiopia won both the men’s and women’s divisions. The United States, which traditionally comes in behind either Kenya or Ethiopia, was able to secure second place in the women’s competition.