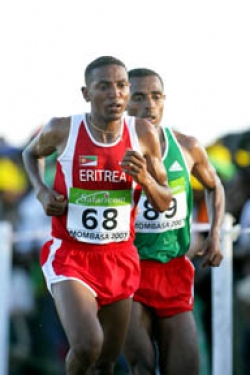 Ethiopia’s Kenenisa Bekele had gone unbeaten for 27 cross country races at the highest level—until yesterday. Five times in succession he had won not only the short but also long course races at the World Cross Country Championships, ten gold medals in all, unprecedented in the history of athletics. Yet in Kenya, of all places, the country of his keenest rivals, the success story of the 24-year-old came to an end in tragic fashion. Stomach pains—no doubt brought on by brutal heat and humidity—forced the Ethiopian to give up just 800 meters from the finish, shortly after Zersenay Tadesse took the lead. The runner from Eritrea, one year older than Bekele and winner of the world 20K road title last year, became his successor in the port city of Mombasa.

Tadesse’s winning time for the 12K course was a slow 35:50, despite the flatness of the course, a sure sign that the harsh weather affected all of the runners. Five Kenyans followed, easily giving Kenya the senior men’s team title. Their would-be rivals, Ethiopia, didn’t even score as a team, as four other team members joined Bekele on the did-not-finish list. Silver went to Moses Mosop, who finished 23 seconds adrift (36:13), and the bronze medal was won by Bernard Kiprop Kipyego (36:37).

At the start of the sixth and final lap, Tadesse and Bekele were sharing the lead. At that point the Ethiopian went clear of his rival and everything pointed to a sixth win over the long course. No one has won six gold medals in the long course at World Cross Country, and such superlative achievements are what motivate Bekele. Yet soon after his surge, Bekele stumbled on a short hill, lost his lead and eventually walked under the fencing lining the course. He later said that he had stomach problems, starting at mid race, thanks to the tropical weather—more than 90 degrees Fahrenheit, with 80% humidity. Bekele now remains tied with Kenyan legend Paul Tergat for the most men’s long-course titles. 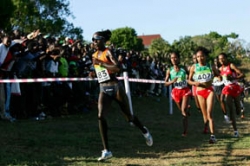 Scores of others, mostly those who didn’t evenly dole out their effort, suffered. Defending junior women’s champion, Pauline Korikwiang of Kenya, collapsed on the course. Fasil Bazuneh was the leading American for much of the senior’s men race, but then faltered, and took almost 11 minutes to cover the final 2-kilometer loop. In all, out of 441 starters among the four races, an astounding total of 82 failed to finish.

The senior women’s race also produced a result not ideal for the home nation. It’s true that Lornah Kiplagat was born in Kenya, but she now runs for the Netherlands, and gave that country its first gold medal at this meet. Kiplagat finished the 8K course in 26:23, followed by the defending champion Tirunesh Dibaba (Ethiopia/26:47) and Meselech Melkamu (Ethiopia/26:48). Ethiopia won the team title from Kenya.