April 2009: The Biggest Marathon Month of the Year! 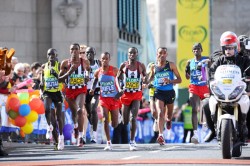 The London Marathon will provide a stunning field once again. © www.photorun.net

There’s no doubt about it: No other time of the year offers so many marathons. From all corners of the globe, cities are hosting large races with deep, high-quality fields. A total of 150,000 runners along with some of the best road racers in the world will be taking part in these races. Paris and Rotterdam kick off their races this Sunday. And then in the two weekends following Easter, Boston, London, and Vienna will host their marathons. Both Boston and London are races in the World Marathon Majors Series (WMM).

Although Hamburg has had its problems this year due to the global recession, interest in all these major Spring marathons remains strong. In fact, entries for London, Paris, Boston, and Rotterdam have long since been sold out. Up to a million spectators are expected to be present at these events.

In the case of the British and American races, a growing number of runners are devoting their energies to raising funds for charities. At the 2008 Boston Marathon, over $11 million had been raised for charities officially linked to the race. London managed to quadruple that figure. Since the 1980s, participants in the London Marathon have raised over 400 million Pounds (around 430 million Euros) for good causes.

Americans in the Running at Boston

On April 20th, Americans are hoping for their first home win since 1985 in Boston when Lisa Weidenbach won the women’s race. Their last win the men’s race goes back another two years when Greg Meyer won in 1983. In the men’s race, the hopes rest on the shoulders of 26-year-old Ryan Hall. Last year in London, the American improved his best time to 2:06:17 hours. He was 10th in the Summer Olympics in Beijing and holds the American record for the half-marathon (59:43).

But he is facing some stiff competition.

Americans also have prospects of success in the women’s race where Kara Goucher has a good chance to win. At the 2008 New York City Marathon in her marathon debut, Goucher came in third place in 2:25:53. And just last week, she won the Lisbon Half-Marathon running 1:08:30. She will face off against a tough field comprised of reigning champion Dire Tune of Ethiopia and the 2007 champion, Lidiya Grigoryeva of Russia. 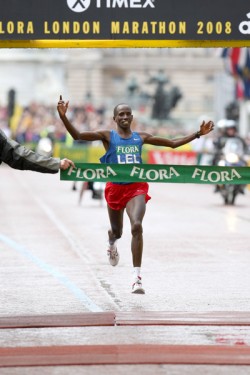 One of the favorites of this year’s London Marathon is defending champion Martin Lel. © www.photorun.net

London leads the way when it comes to the quality of the elite field. No other race in the world has assembled such a high quality group of elites with a budget to match. So far, ten athletes have run marathons under 2:06. Four of them will be on the start line in London on April 26th. Alongside last year’s champion and course record holder, Martin Lel (2:05:15), will be the Olympic champion, Sammy Wanjiru (both from Kenya), Abderrahim Goumri (Morocco), and Khalid Khannouchi (USA). A further four runners entered for London have personal bests under 2:07. Another top-seeded runner who’s been getting a lot of attention is the World Half-Marathon champion, Zersenay Tadese (Eritrea). His debut will be at London.

The women’s field is just as exciting, although race director Dave Bedford, has had to deal with the withdrawal of the world record holder, Paula Radcliffe (Great Britain/2:15:25) because of injury for the second year in row. That leaves Irina Mikitenko (TV Wattenscheid) as the center of attention. Mikitenko won the women’s title last year in London where she ran 2:24:14. She later went on to become the first German woman to break 2:20 when she ran 2:19:19 in Berlin. Two more women who have gone under 2:20 will be on the start line: the World Champion and Olympic runner-up, Catherine Ndereba (Kenya), who is number two on the world all-time list behind Paula Radcliffe with 2:18:47, and China’s Zhou Chunxiu, the Olympic bronze medalist who has run 2:19:51. Another five women have run sub-2:22. Among them is the Olympic champion, Constantina Dita (Romania) which means London will have all the Beijing women medalists present on the start line.

London and Boston are the Spring races where points are at stake for the World Marathon Majors Series (WMM). Sammy Wanjiru and Irina Mikitenko (women’s winner in 2007-2008) lead the 2008-2009 rankings and both will be running in London. If Mikitenko repeats her London triumph, she could take a decisive lead in the hunt for the $500,000 prize money this year.

Rotterdam is another marathon renowned for its world class performances. Three world records were set on its fast course before the turn of the century. Last year’s champion, William Kipsang (Kenya), who ran a course record of 2:05:49 in 2008, faces among this year’s competitors the fast rising star and winner of the 2008 Milan Marathon, Duncan Kibet, as well as a marathon debutant with a great deal of potential: Patrick Makau Musyoki (Kenya), the second fastest ever for the half-marathon with 58:52 minutes.

Vienna Marathon Tries Something Different: Newcomers Only in Elite Field

The organizers of the Vienna Marathon have come up with a novel idea: the elite men’s and women’s fields on April 19th consist entirely of marathon debutants. Center stage for the men will be two former steeplechasers: Günther Weidlinger (Austria) will run against the 2000 Olympic champion, Reuben Kosgei (Kenya). There are hopes for a home win in the women’s race in the shape of the successful mountain runner Andrea Mayr. Taking into account other races held in conjunction with the marathon, Vienna is likely to have around 26,000 participants which will make it the biggest Spring race in the German-speaking world.

Last summer, the Hamburg Marathon reached a major milestone: it was Germany’s second-largest and was designated a “Gold Label Road Race” by the International Association of Athletic Federations (IAAF). Hamburg has had a consistent record of top-class results in recent years. However, Hamburg has undergone a serious of unfortunate setbacks. Hamburg’s title sponsor, Conergy, has withdrawn its support. Another sponsor, Möbel Kraft, has stepped at the last minute. “The financial crisis is affecting us as well, but the runners will find things the same as they’ve always been,” said the race director Wolfram Götz. The Hamburg Marathon will run as normal, although there is a noticeable decline in entries which has hit the Hamburg organization particularly hard in these difficult times. In recent years, there have been approximately 23,000 requests for bibs, but this year the figure dropped to around 19,000. Apart from the confirmation of European women’s champion, Ulrike Maisch (LAV Rostock), the field for the April 26 marathon has not been set yet.

In contrast to Hamburg, another race in Germany is fast building a name for itself: the Metro Marathon in Dusseldorf which is on May 3. In terms of total entries, the Dusseldorf Marathon is much smaller compared to Hamburg. But Dusseldorf is gaining in popularity. The elite field is developing well and the majority of Germany’s leading women runners ran there in 2008. This year, the Dusseldorf marathon’s organizers are setting up an interesting German domestic rivalry alongside leading international runners.