Another World Half Marathon Record for Sammy Wanjiru 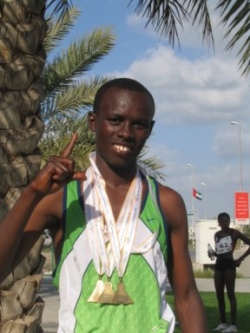 Sammy Wanjiru has improved his world record for the half marathon, set just five weeks ago, by 18 seconds. The 20-year-old was a clear winner of the Pier-City-Pier race in The Hague, Netherlands in 58:35. Breaking free of his rivals after only three kilometers, Wanjiru went through 10K in 27:27, 15K in 41:30 and 20K in 55:31. If Dutch officials had official timekeepers at 20K, this will also be a world record. (Haile Gebrselassie holds the world best with 55:48.)

The half marathon distance appears to be the ideal event for Wanjiru, who originally regained the world record for the distance on February 9. The Kenyan ran 58:53 in Ras al Kaimah (United Arab Emirates) and deprived no less a superstar than Gebrselassie of the world best. Wanjiru originally set a world best at the distance in 2005 (59:16), and then reclaimed it earlier this year from Gebrselassie, who ran 58:55 in Phoenix last year. Wanjiru is a potent force at other distances too. In 2005, he ran 26:41.75 for 10,000m, which is the world junior record. As a 15-year-old in 2002, he achieved a world record for his age group of 28:36.08. After he went from Kenya to Japan in the same year to study on a scholarship, he became the Japanese champion over 10,000m in 2005.

“My next goal is the 10,000m at the World Championships in Osaka,” Wanjiru said. First, he’ll have to qualify at the Kenyan Trials. After that, “I shall be running the Rotterdam Half Marathon in September and shall improve my world record still further,” said. “I can ran even faster.”