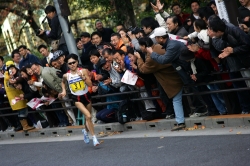 Twenty-five years ago, big running events were increasingly being established all over the world. At the time, the U.S. and England were a few steps ahead of other countries in putting on mass events—the 1981 New York City Marathon had almost 15,000 participants, and the race was televised by ABC for the first time, while at the inaugural London Marathon that year, 20,000 people applied for one of the 8,000 available numbers.

Still, overall standards and coordinated international promotion were lacking. The element of tourism and an adequate organization played a minor role at that time. For example, few organizers knew how to measure a race course correctly. Also, it was rare for people to travel in groups to exotic locations just to run a marathon. A number of organizers realized the necessity and possibilities of international cooperation, which led to the creation of the Association of Intertional Marathons (AIMS) in May 1982 in London. At first, membership was restricted to marathons. In 1987, it was expanded to shorter races, and in 1990 ultra races and marathon relays were added.

Now celebrating its 25th anniversary, AIMS has spurred the development of international road running and initialized a series of important decisions for the sport. The expressed goals of AIMS from 1982 are still effective today: “International road running shall be supported, developed and promoted in cooperation with the International Association of Athletics Federations (IAAF). The members of AIMS shall benefit from each other’s experience and knowledge.”

There are some interesting parallels from the time of the foundation of AIMS to today’s World Marathon Majors, which the marathons from Boston, London, Berlin, Chicago and New York formed a little over a year ago. The race director of the Montreal Marathon, Serge Arsenault, had a similar idea back in 1981. He wanted to start a marathon world championship. In doing so, the best runners of the world should have run six races on five continents in a two-year cycle. By a point system, based on position and time in each race, the world champion was to be determined.

This system was never put into action. But the initiative by Arsenault was an important step for the future cooperation of international organizers. In one of the following meetings among race directors, the basis of AIMS was formed. Among those leading the procedures were long-time Boston race director Will Cloney, who was elected first AIMS president in 1982; Chris Brasher, the initiator of the London Marathon, who followed Cloney as AIMS president for a short spell; and Fred Lebow, founder of the New York City Marathon.

In times without e-mail and when fax machines were rare, too, AIMS members were updated about developments mainly by a postal newsletter. The first newsletter of AIMS, signed by Chris Brasher and Fred Lebow, was released in spring 1982. Already then, shortly after the foundation, it proved that the idea was working. Brasher and Lebow included the following plea to their members: “Please send at least 50 registration forms of your race to our AIMS office in New York. We receive a couple of dozens inquiries every week from runners who want to participate in international marathon races.”

The “AIMS Yearbook” played a decisive role regarding the promotion of AIMS road races and international road running. It was first published in 1984. Later it was transformed into “Distance Running” magazine, which is published four times a year and has a circulation of about 200,000. AIMS members distribute them among their participants free of charge.

Courses were measured the way the respective race directors considered reasonable, which usually meant the most convenient way. Then courses were measured by driving in a car, which was far from precise. It was different in Japan. The former New York City Marathon race director Allan Steinfeld reported that a 100-meter-long steel ribbon was used for measuring by the Japanese. The ribbon was placed bit by bit on the street—for the marathon distance, that meant 442 times in total! Additionally the rules then said that the course had to be one meter away from the gutter. That meant that extra persons with one-meter sticks measured the right space between the edge of the road and the steel ribbon throughout the entire course.

Steinfeld was significantly involved when AIMS developed a reliable system which quickly became the international standard for road races. Today a calibrated cycle wheel is used. This method was adapted for the Olympic Games and World Championships, too.

Years later another technical innovation, which was pushed forward by AIMS, was the chip timing system. In 1994 the Berlin Marathon was the first big international race to use this technology. This system is a standard in our sport today as well.

Some initiatives brought forward in the past 25 years appeared to be unsuitable. One involved the top athletes’ payments. In an AIMS board meeting in 1982, all members voted for prize money but at the same time against any appearance fees. That soon proved inappropriate.

During the era of today’s AIMS, President Hiroaki Chosa (Japan), who was elected back in 1990, not only the financial situation enhanced due to Japanese sponsors, but also the cooperation with the International Association of Athletics Federations (IAAF) improved. For a long time AIMS flogged a dead horse concerning the official recognition of world records in road racing. So-called “world best times” were recorded, but no world records. In 2003 the IAAF Congress finally agreed to accept world records in road racing if certain standards were met. Today the best performances of Paul Tergat (2:04:55/Berlin) and Paula Radcliffe (2:15:25/London) are listed as marathon world records.

While, of course, many world record races highlighted the history of AIMS in the past 25 years, there were three other marathon races thatch wrote sports history: The course of the 1990 Berlin Marathon led 25,000 people through both parts of the once-divided city and through the Brandenburg Gate just a few days before the German reunification; the 100th Boston Marathon in 1996 recorded 35,868 finishers and remained the biggest marathon ever for many years; the New York City Marathon in 2001 attracted worldwide interest since it took place less than two months after the terrorist attacks of September 11. These three races were impressive evidence of the cultural significance road running has reached today.

In 25 years the number of AIMS members has increased from 30 to 230, from 80 nations. More than 2,500 running events were held from members of the Association of International Marathons and Road Races since 1982. Among these there are not only the classic races, but events at the North Pole, in the Sahara, on the Great Wall, in Xiamen, New Zealand, Rio and Antarctica.