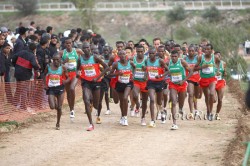 Even without the assistance of multiple title champ, Kenenisa Bekele, the gold medal in the men’s race at the World Cross Country Championships in Amman, Jordan still went to Ethiopia. Gebre Gebremariam won the race on a tough 12-kilometer course, defeating Moses Kipsiro of Uganda and Zersenay Tadese of Eritrea. On the other hand, the women’s 8K race yielded no surprises. Florence Kiplagat, winner of the Kenyan Trials, lived up to her reputation as one of the world’s best. Fellow Kenyan, Linet Masai, took the silver medal ahead of the Ethiopian, Meselech Melkamu.

Once again, African runners have proven their domination of cross country; they decided the outcome in all four races. The top ten finishers in each of the four races were all African-born runners. Weather conditions in Amman were more European than Middle Eastern with temperatures hovering around 55 degrees Fahrenheit.

In the absence of the injured champion, Kenenisa Bekele, the Kenyans were hoping for their first individual gold medal in the men’s race since Paul Tergat won in 1999. But it was not to be. In the end not even the best of the Kenyans could claim a place on the podium. Leonard Komon had to settle for fourth place, though he only just lost out, in 35:05 minutes.

The Kenyan, Moses Mosop, second two years ago but suffering injuries in 2008, had been regarded as the pre-race favorite and was in a 14-strong lead pack after four of the six laps. But the “Big Engine,” as Mosop is called, ran out of gas on the final lap. The 23-year-old runner came in eleventh in 35:17. Two places behind him was the steeplechase world-record holder, Saif Saaeed Shaheen of Qatar, who finished in 35:28. After a year beset by injuries Shaheen made an outstanding comeback.

But Shaheen played no part in the race for medals. Going into the final 150 meters, six athletes were still in contention at the front. The dramatic finish was won by the 24-year-old, Gebre Gebremariam, in 35:02, two seconds ahead of Moses Kipsiro and Zersenay Tadese. Behind Komon in fourth place were Habtamu Fikadu (Ethiopia/35:06) and Matthew Kisoro (Kenya/35:08). For Gebre Gebremariam, this was the highest achievement of his career thus far. Last year, the Ethiopian finished 17th at the World Cross Country Championships in Edinburgh and was not reckoned to be among the leading contenders in Amman.

Kenya still managed to retain the gold medal for the men’s team race. Their squad narrowly defeated Ethiopia and Eritrea who finished tied for points.

The first non-African to finish in Amman, back in 26th and 1:28 minutes behind the winner, was the Spaniard, Charles Castillo. The only German runner at the World Cross-Country Championships, Sebastian Hallmann (LG Stadtwerke München), finished well down the field as expected. He ran an even race to finish 104th of the 145 starters. Hallmann’s time of 39:29 was 4:27 minutes behind the winner.

Injury had also ruled out the defending champion Tirunesh Dibaba (Ethiopia) from the women’s race. The Kenyans took full advantage of this. Florence Kiplagat was able to haul in her compatriot and race leader, Linet Masai, in the closing stages of the 8K race. Masai had built up a lead of around 50 meters and looked on course for a certain win. But it was Kiplagat who triumphed in 26:13, three seconds ahead of her. Meselech Melkamu finished third in 26:19. Next to finish were Lineth Chepkurui (Kenya/26:23), Wude Ayalew (Ethiopia/26:23), and the reigning European Cross-Country champion, Hilda Kibet (Netherlands/26:43). The best non-African runner was Kimberley Smith (New Zealand) who finished a very respectable 13th place in 27:05.

Kiplagat’s victory was the greatest success of her budding career (she’s only 22 years old!) Two years ago, she finished fifth at the World Cross Country Championships in Mombasa, Kenya. Her victory marked the first occasion since 1994 that a runner wearing a Kenyan vest had won the women’s title in the long course race. And for the first time in eight years, the team title went not to Ethiopia but to Kenya. Ethiopia came in second, ahead of Portugal. Britain’s Steph Twell had a tough day. The triple European Junior Cross Country champion finished 38th in 28:46. “Today of all days, in the most important race of the cross country season, nothing went right. It’s a shame but I have to accept it and get on with things and look to the future,” said Twell afterwards.

Africa’s talented runners also dictated the outcome of the junior competition in Amman. The Ethiopian, Ayele Abshero, won the junior men’s 8K race in 23:26, defeating Titus Mbishei (Kenya/23:30) and Moses Kibet (Uganda/23:35). Despite the absence of Tirunesh, the Dibaba family still won a gold medal, thanks to Genzebe Dibaba. The 18-year-old sister of Tirunesh retained her title over the 6K course, winning in 20:14. Mercy Cheron (Kenya) was second in 20:17 ahead of her compatriot, Jackline Chepngeno (20:27), who finished third at the age of the 16. 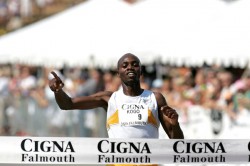 Micah Kogo is the new 10K world-record holder on the roads. © www.photorun.net

Micah Kogo set a world record for 10K on the roads in Brunssum, Netherlands on Sunday. The Kenyan ran 27:01 minutes on the road, improving by one second the old record held by Haile Gebrselassie which had stood for seven years. Yet another of the Ethiopian’s world records on the road has now been broken. Another Kenyan, Sammy Wanjiru, also holds the world best for the half-marathon. However, Gebrselassie still holds the world record for 20K. This is because what should be the best time by the Kenyan, Patrick Makau Musyoki, who won the Ras Al Khaimah Half-Marathon in the United Arab Emirates in February, cannot be officially recognized because the 20K point in the race was mismarked. Kogo’s 10K time demonstrates that the best Kenyan runners are steadily drawing closer to Gebrselassie’s world marathon record.

Micah Kogo made good use of help from his training partner Abraham Chebii during the first half of the race in Brunssum. They went through 5K in13:28 before Kogo broke away to win in 27:01, defeating his fellow countryman, Chebii (27:47). Another Kenyan, Peter Kamais, was third in 28:20. Kenyans also took the first three places in the women’s race. Magdalena Mukunzi ran an impressive 32:08 to defeat Leah Malot (32:55) and Anitha Kiptum (33:29).

Several times in the past, Micah Kogo has proven his enormous talent. He surprised the world in 2006 by setting the fastest time in the world for 10,000 meters that year with 26:35.63 minutes at the Golden League Meeting in Brussels. He was the winner at the Brunssum 10K in 2007 when he narrowly missed Gebrselassie’s world record, running 27:07. Last year, Kogo was third in the 10,000m at the Olympics in Beijing—the top Kenyan in that event.

Kenyan runners were in complete control at the Prague Half-Marathon, claiming the first three places in both the men’s and women’s races. Nicholas Koech and Rose Kosgei each broke the course record as around 6,500 runners passed through Prague in cool conditions on Saturday.

The outcome of the men’s race wasn’t decided until the final kilometer when Koech broke away from his two remaining rivals, crossing the line in 60:07. That left him just short of a coveted sub-60 minute finishing time, but the Kenyan did improve the course record held by Patrick Ivuti by 53 seconds. Nicholas Kamakya was the runner-up, placing only two seconds behind and Matthew Kipchirchir took third place in 60:15.

Günther Weidlinger (Austria) came through a good dress rehearsal three weeks before the Vienna Marathon. The former steeplechaser, who will make his marathon debut on April 19, finished eleventh in 63:26. Without going all-out, he was just about spot on in achieving his aim of three-minutes-per-kilometer pace.

Rose Kosgei became the first woman to break 70 minutes in Prague. Her time of 69:03 was a big improvement on the previous course record of 70:08. Her compatriots, Irene Kwambai (69:27) and Pasalia Kipkoech (69:59), also broke the 70-minute barrier and finished in second and third place respectively.