Afewerki Berhane and Mamitu Daska Are Victorious at Inspirational BolderBOULDER

Every year, over 50,000 runners of all ages and abilities from all over the world stand at the start line in one of Colorado’s most beautiful towns ready to take part in the largest timed road race in the United States—the BolderBOULDER. It is a race that always seems to be fun and exciting, with thousands of spectators lining the streets of Boulder to high-five runners who range from children to seniors.

The famous race is host to some of the world’s greatest athletes. But the BolderBOULDER is also about true inspiration and the field provides countless heartwarming stories about runners who are taking part in the race to help others. Take, for example, the Lyons, Colorado, fire department, where, according to CBS Denver, half of the 40-member crew took part in this year’s event to raise money to build a new firehouse. In 2013, extreme flooding destroyed the station along with many homes. The firefighters also lost an engine. But thanks to the team, and to donations from the community, the firefighters are doing all they can to rebuild so they can continue to serve and protect the city of Lyons.

“It’s a great way to really kick this off and let people know what we’re doing,” said firefighter and runner Evan Patronik. 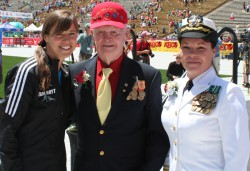 John “Jack” R. Thurman, here together with Uta and his daughter Karen, was honored on Monday. © Michael Reger/Take The Magic Step

During the Memorial Day Tribute, which is held after the citizen’s race and the International Team Challenge, the organizers honored amongst others Sgt. John “Jack” R. Thurman USMC, Ret., who lives in Longmont, CO. He is a survivor of the World War II battle of Iwo Jima in 1945 and author of “We Were In The First Waves Of Steel Amtracs Who Landed on Iwo Jima.” His daughter, Karen, who lives in Loveland, CO, and also served in the military as a nurse practitioner, told Uta, “To serve your country, you have to be ready, no matter where or when.”

For the past 35 years, organizers of the race have maintained a strong commitment to give back to the local community. According to the BolderBOULDER’s Website, over 200,000 pounds of unopened food from the race has been donated to the Community Food Share organization since 2009. Also, the race partners year round with the Boulder Valley School District on fitness programs for teachers and staff, providing them materials and incentives for trainers to help them prepare for the race. 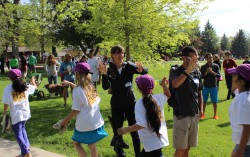 “High Fives” with the Columbine Kids and Uta before their 37th Columbine Mile Marathon in Boulder. © Take The Magic Step

Take The Magic Step’s Uta Pippig has always made this inspiring race a priority, and she attended this year’s edition to show her support and cheer on all the runners and her friends. The week before the race, Uta had joined the Columbine Mile Marathon participants to encourage the young runners of the community as they ran a mile together. And afterwards she said, “We had so much fun to be with the kids for their 37th running of the event in Boulder to celebrate a healthy lifestyle and the joy of running.”

The exciting BolderBOULDER 10K event dates back to 1979 when Rick Rojas of the United States was the first runner to win it. This year, under sunny skies and with temperatures in the 70s, Afewerki Berhane of Eritrea was the first elite men’s runner to enter the University of Colorado’s Folsom Field where the finish line is located. He broke the tape in front of a deafening crowd in 29 minutes and 11 seconds. Second place went to KIMbia Athletics’ own Allan Kiprono (29:13), who is coached by Take The Magic Step’s Dieter Hogen. Solomon Deksisa of Ethiopia was third in 29:21. 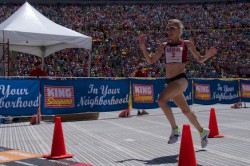 In the women’s division, 30-year-old Mamitu Daska of Ethiopia won after she made a gutsy move to the front just one mile into the race. Once she took the lead, Mamitu, who has won the Dubai and Houston marathons, never needed to look back as the gap between her and the chase group grew from four seconds all the way to 22 seconds as she entered Folsom Stadium. Mamitu broke the finish line tape in 32:21. American Olympic Bronze Medalist Shalane Flanagan, who last month thrilled Boston Marathon crowds by leading most of the way, was second in 33:05. Third place went to Risper Gesabwa of Kenya (33:39).

One unique aspect of the BolderBOULDER has always been the International Team Competition where three runner-teams compete for their countries. Fitting the Memorial Day tribute, the United States fielded three squads in honor of the colors of the American flag: Teams Red, White, and Blue. 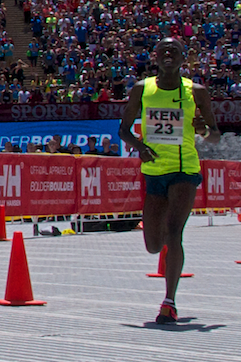 One the men’s side, Team Eritrea prevailed, with Team Ethiopia coming in second and Team USA (red) rounding out third. The top American ended up being something of a surprise, with Sean Quigley finishing seventh overall. Sean was on the third American squad and ended up crossing the line ahead of pre-race favorite, Ryan Hall, the fastest American marathoner ever. Sean’s coach, Lee Troop, embraced him and told him, “I’m so proud of you.”

The top overall nation in the women’s race was Ethiopia, which scored 16 points. Kenya and Team USA (red)—with Shalane Flanagan teaming with Deena Kastor, who set an American masters record in the half marathon last month, and Sara Hall, a Pan American Games medalist—were second and third respectively.

In the Citizen’s Race division, University of Colorado Assistant Cross-Country coach Scott Dahlberg won the men’s competition in 30:50, while Sarah Crouch was first in the women’s division, coming across the finish line in 35:11.

Josh George and Amanda McGrory won the men’s and women’s wheelchair races respectively. Both athletes are Paralympic gold medalists and have known each other and trained together since childhood.

Uta, who watched the race on the course and in Folsom Stadium, said: “Once again we saw a thrilling team competition. I watched the race at 6K where the runners come up a hill. And later there was this great atmosphere in the stadium with thousands of people watching this wonderful Memorial Day Tribute. A heartfelt thank you to the organizers and all volunteers who make this fantastic event each year possible.”