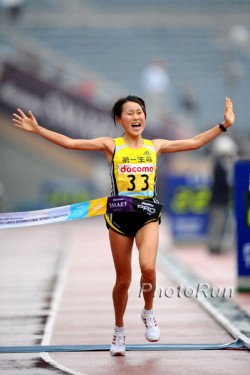 A 30-year tradition came to a close Sunday in Japan when Tokyo hosted its last running of the Women’s Marathon. Citing concerns for clearing Tokyo’s busy streets for two separate marathons, the city’s police department decided to combine the men’s and women’s marathon starting next February.

In Sunday’s final running of the race, a hometown favorite prevailed: 27-year-old Yoshimi Ozaki. Ozaki won the race in blistering 2:23:30 hours—the ninth-fastest marathon run this year. With this time, Ozaki qualified for the 2009 World Championships in Berlin.

“I’m both delighted and surprised to have won the final edition of the Tokyo Marathon,” Yoshimi Ozaki told the IAAF website (iaaf.org). Before Sunday, Ozaki’s fastest time was 2:26:19 (her marathon debut).

Going into the race, Yoko Shibui was the favorite. After all, she was the 2004 Berlin Marathon champion-winning it in 2:19:41. And so she took the lead early on—passing through the first 10 kilometers in 32:55 minutes (2:19 hours pace). Only Magdaline Chemjor, a top-seeded Kenyan, could keep Shibui company. But Chemjor dropped off soon afterwards. Through the half it was still Shibui’s race: the clock read 70:07.

Yoko Shibui looked well on her way to victory, but began to struggle over the last few kilometers—difficult, uphill kilometers. It was on these hills where Ozaki made her move. She first passed second-place runner Yuri Kano and then made her way to the leader, Shibui, 4 kilometers from the finish. (Yoko Shibui eventually finished fourth in 2:25:51.) Behind Ozaki, Kano finished second in 2:24:27 and British runner Mara Yamauchi placed third in 2:25:03. The Kenyan Salina Kosgei finished fifth in 2:30:34.

Ethiopians Win on the Seven Hills

It’s not surprising that the winner of one of Holland’s largest road races, the Seven Hills race, was an Ethiopian. It is, however, a surprise that the winner wasn’t Kenenisa Bekele. The world-famous, double-Olympic champion and multiple world-record holder placed third on Sunday in the 25th edition of the race which drew nearly 30,000 runners. Bekele had run well previously in this 15K, out-and-back race from Nijmegen to Groesbeek. But it wasn’t to be Sunday.

The winner, fellow Ethiopian Ayele Abshiro, broke the tape in 42:17. The lead pack hit 5K at 14:09—a bit off course-record pace. At that point, Kenenisa Bekele was three seconds behind Isaac Kiprop of Uganda. (Kiprop eventually finished second in 42:19). Ayele Abshiro was in third. Then Bekele, the Olympic champion, surged into the lead. He reached 10K in 27:57, leading Kiprop and Abshiro by 15 seconds. However, Bekele started having problems over the last 5K and dropped back—still coming in 22 seconds ahead of his younger brother, Tariku. 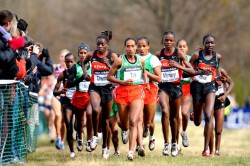 In the women’s race, Mestawat Tufa put on an incredible performance—running 46:56. This time was one second shy of Kayoko Fukushi’s world record! (Fukushi had set the time during the 2006 Marugame Half-Marathon.) Tufa’s split at 5K was 15:56 and 31:32 at 10K.

Tufa, who took the silver medal this year at the World Cross-Country Championships behind her compatriot Tirunesh Dibaba, ran the last 10K in 31:00. Putting this amazing split in perspective: German runner Irina Mikitenko’s world best 10K for this year is 30:57! The Kenyans Martha Komu (50:06) and Gladys Otero (50:35) finished second and third respectively. 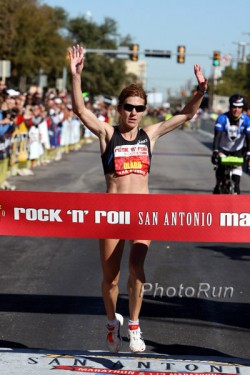 Nuta Olaru, a 38-year-old Romanian, surprised the women’s field on Sunday in San Antonio. Going into the race, the clear favorite was Margaret Okayo. The Kenyan’s record racing in the U.S. is practically unmatched. She owns the records on two of the three courses that comprise the American marathon majors: Boston and New York. She is also a former London Marathon champion.

So as expected, Okayo took the early lead. But just shy of the 10K mark, Olaru surprisingly seized the lead. Okayo couldn’t counter the Romanian’s move, and by 15K, was unfortunately forced to drop out of the race—citing foot problems.

By the half (1:13:12), it was Olaru’s race to lose. She ran the rest of the race unchallenged and broke the finishing tape in 2:28:54—nearly a minute ahead of second-place finisher, New Zealand runner Liza Hunter-Galvan, who came in at 2:29:37. Third place went to Karolina Jarzynska of Poland (2:33:19).

After the race, Nuta Olaru had this to say about her win: “The San Antonio course is great and the weather was perfect. It’s a wonderful feeling to have won the very first edition of a race like this.”

The fastest man in San Antonio was the Kenyan, Meschack Kirwa, who crossed the line 2:14:36. He made his move late in the race, pulling ahead of the American, Matt Downin, and the Russian, Dmitry Safranov. “At 30K, I knew I could win, because I could have gone faster still. The cheers from the spectators along the course made me run faster,” Kirwa said during the post-race press conference.