A Great Day in Green Bay for KIMbia’s Athletes 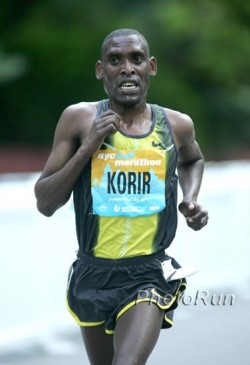 The Bellin Run in Green Bay, Wisconsin has been around for 34 years and just keeps getting better. On Saturday a record 18,398 participants signed up for the annual 10-kilometer race, which benefits the Bellin College of Nursing. Perfect weather showed up for the race as well with cool temperatures and overcast skies making the race as enjoyable as possible.

There to take part in her 14th running of the race, Uta accompanied the participants along the course, which starts and finishes on Webster Avenue in front of the Bellin Hospital. “It was a great morning for running,” said Uta. “We had perfect weather, the best in the past twenty years. The race was beautiful organized. The record-breaking field of more than 18,000 participants as well as the spectators had a great time out there on the course and along the course. So congratulations to the Bellin Hospital, the race director Randy Van Straten, and to all who made this race so terrific.” Uta placed second in her age group (40-44 years) and was pleased with her result of 40:12 minutes.

KIMbia was well represented at the race with John Korir (Kenya) winning the men’s race in 29:12 minutes and James Carney (U.S.) finishing second in 29:23. Mike Morgan (U.S.) placed third in 29:56. John Korir’s win Saturday was his fifth at the Bellin Run, making him only the second man in the race’s history to do so. “I have never ran in weather like this before, it’s unbelievable. I tried my best. I like this course so much and am happy,” a smiling John Korir told the Green Bay Press-Gazette afterwards. 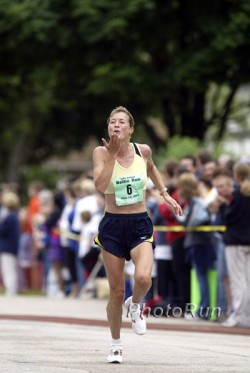 Uta looks forward to the great atmosphere at the Bellin Run each year. © www.PhotoRun.net

Competing in her first Bellin Run, KIMbia’s Jelliah Tenega of Kenya won the women’s race in 32:27. Her strategy of running with the elite male racers and hanging on for as long as possible proved to be a good one. “I felt strong the whole way. I liked the course and the atmosphere of the entire event,” she recalled afterwards. Dot McMahan (U.S./34:05) and Ann Alyanak (U.S./34:17) finished second and third respectively.

There were a lot of happy runners as well further back in the results. Kathy Kampen of Green Bay had been training for the race with her nine-year-old son, Nathaniel, as part of an after-school running program. “This is an excellent way for us to spend some quality time together even if I’m always trying to catch up to him. This truly is an amazing experience we can share together and we look forward to making it a tradition each year,” Kampen told the Green Bay Press-Gazette.

Parents and children like Kathy and Nathaniel are exactly what the organizers of the Bellin Run want to promote. Since its inception 34 years ago, the race has inspired a growing number of individuals to engage in healthy habits.

For further results of all participants please click here. Linet Masai on her way to victory in New York © www.PhotoRun.net

Conditions were good for the race, which boasted the strongest field in the history of the race. Apart from Linet Masai and Emily Chebet, it included this year’s Boston Marathon winner, Teyba Erkesso (Ethiopia), and the multiple winner of the world half marathon title, Lornah Kiplagat of the Netherlands. However, once Linet Masai had gone through 5 kilometers in 15:24 and then increased the tempo, nobody could stay with her. The Kenyan runner, only 20, completed the second half of the race just as fast to win in 30:48-the fourth-fastest time ever run in this New York race and three seconds shy of the fastest time in the world this year. “I know the course now and the next time I’ll try to break the course record,” said Linet Masai, who was 20 seconds outside the course record set by the Moroccan Asmae Leghzaoui eight years ago.

Emily Chebet took second in 31:13, ahead of the Ethiopian Worknesh Kidane (31:18). After a lengthy time sidelined due to injury, Lornah Kiplagat made an impressive return and finished fourth in 31:40. The highest-placed non-African was Kim Smith of New Zealand, who was fifth with 32:15. Teyba Erkesso was sixth in 32:24. Paula Radcliffe (right) jogs the last few meters with her three-year-old daughter and Kara Goucher (without bib number) who is also pregnant. © www.PhotoRun.net
World record holder in the marathon, Paula Radcliffe, was there as well, but not to race. Now five months pregnant, she took it easy, jogging the 10K course. The Briton, who is expecting her second child in September, was joined for the last few meters by her daughter Isla and the leading American runner Kara Goucher, who is also expecting a baby.

The biggest race of the year was held in Frankfurt/Main when 72,741 runners took to the streets. The German edition of the J.P. Morgan Corporate Challenge was one of a series of international events for companies where emphasis is placed on team effort. Every runner in the race is a member of a corporate team for the 5.6K distance. In terms of numbers, the biggest teams in Frankfurt were Commerzbank and Lufthansa.

The fastest runner on the course, which wound through the Frankfurt city center, was Christophe Chayriguet of Bongrain Germany GmbH. After an exciting run to the finish in 16:34 he came in two seconds ahead of Manuel Stöckert (Special Police Force Group Würzburg) who had held the lead for much of the race. Jenny Schulz (German Federal Bank) won the women’s title to complete a hat-trick: she clocked 19:25 for her third win. Second place went to Katharina Heinig (Hessen Police) who is one of Germany’s marathon hopes for the future and is also the daughter of the former world-class runner Katrin Dörre-Heinig.

Germany’s minister for Health, Philipp Rösler, fired the starting gun. “This is about companies who have team spirit. I think it’s great that a company comes together like this,” he said beforehand. The event raised close to 220,000 Euros for charity, which will go to the German Sports Aid Foundation to help young disabled sportsmen and women.

The biggest race in the world before the J.P Morgan Corporate Challenge in Frankfurt took place in San Francisco in May where over 60,000 ran the 12K “Bay to Breakers.”