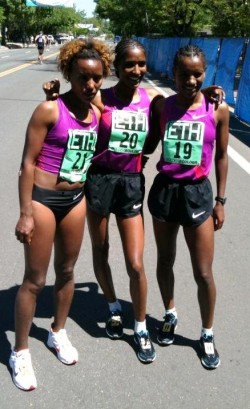 Most spectators who show up to watch a road race expect to see a close finish between runners eager to cross the line first. But at the 32nd annual BolderBOULDER 10-kilometer race on Sunday, the finish was anything but usual. Showing solidarity and good sportsmanship, the top three runners in the men’s division, all Ethiopians, crossed the finish line together holding hands. The victory was ultimately awarded to Lelisa Desisa who crossed the line in 29:16.93. A hair’s length behind Desisa was Tilahun Regassa and Tadese Tola who finished second and third respectively.

When asked about the unusual finish afterwards, Desisa told USA Today, “We decided if no Kenya and if we are three, we finish together.” The nearest Kenyan to the trio was KIMbia’s John Korir who finished fifth in 30:02 minutes. The three Ethiopians made their ultimate move around the 3-mile point when they surged ahead of two of their Kenyan rivals. Former University of Colorado standout Brent Vaughn placed fourth in 29:56. Vaughn’s excellent showing helped Team Colorado place second behind Ethiopia in the team competition. When the third runner from the Colorado team, Jorge Torres, entered Folsom Field, the entire stadium got to its feet to cheer him on as he made his lap around the track. Kenya ended up taking third.

It was also a great day for the Ethiopian women as well. Mamitu Daska crossed the line first in 32:28, while Amane Gobena placed runner up in 33:11. Third place went to Kenya’s Emily Chebet (33:40). KIMbia’s Jelliah Tenega was fourth in 33:57. Just as with the men, the Ethiopian women won the team competition. Kenya place second and the United States placed third. 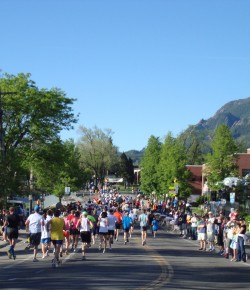 Nearly there, BolderBOULDER participants pass the 4-mile mark on their way to Folsom Stadium. © Take The Magic Step

The conditions were nearly perfect for this fun and exciting race. Uta ran in the citizen’s race in the morning and was excited about the weather conditions: “The early part of day started with calm and cool weather, later the heat turned on just an hour before the international team competition.” Nearly 54,000 runners of all ages and abilities entered the race, making the BolderBOULDER the fifth-largest road race in the world and the largest road race in the United States where all participants are timed. She was amazed at the turnout. “A lot of Boulderites were along course even while almost the entire city was on their legs running the race.”

Thousands of spectators lined the 6.2-mile course (an interesting pictorial history of it can be found here), which winds through beautiful downtown Boulder. Marching bands, belly dancers, and high school cheerleaders greeted the runners. Families ran together, including some proud grandparents who ran with their grandchildren. Many participants donned funny costumes and high-fived volunteers at the water stops. The race was one giant festival, which made Boulder a wonderful place for running enthusiasts to celebrate Memorial Day. For results click here. 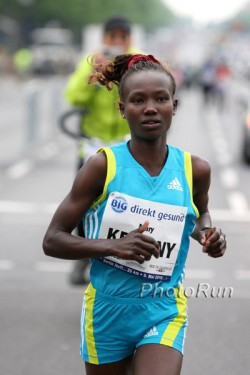 Kenya’s Mary Keitany and Mo Farah of Britain won the “Bupa London 10,000” on Monday. Mary Keitany improved her personal best to 31:05 minutes in the 10K race, which was held in the heart of the British capital. Mo Farah ran 27:44—good enough to break his own UK record by six seconds. The race, held on “Bank Holiday Monday” with the temperature showing 55 degrees Fahrenheit, was on the same circular course as the Olympic Marathon that will take place two years from now in London. The start and finish were in St. James’s Park, which is near Buckingham Palace. More than 13,000 participants ran past well-known London landmarks such as Westminster Abbey, Big Ben, the Houses of Parliament, and St. Paul’s Cathedral.

Mary Keitany’s performance, 31:05, a four-second PR, further demonstrates her great shape. Just over three weeks ago, she set the world 25K record in Berlin (1:19:53 hours). Keitany, 28 years old, moved to 15th on the world all-time 10K list for women and the Kenyan is now second fastest in the world this year at that distance.

“I’m delighted to have won in London and also set a personal best—I gave it my very best,” said Mary Keitany who pushed the pace after 3 kilometers and broke away from her Kenyan rivals to finish over a minute ahead of Doris Changeywo (32:15). Edith Chelimo took third place in 34:30 to complete the Kenyan clean sweep.

“I knew I was in good form so was confident,” said Mo Farah, who entered the race as defending champion. The Briton, together with Micah Kogo, the Kenyan who holds the world record for the road 10K (27:01), had broken free of their remaining rivals just before 6K. With 2K remaining, it looked as if the Kenyan favorite would win. The world record holder took a slight lead ahead of Mo Farah but couldn’t shake off the Briton. With 200m left, the reigning European indoor 3,000m champion countered and went past Micah Kogo. “I love running in London because I get such great support from the spectators. 200 meters from the finish I just gave it everything I had,” said the 27-year-old Mo Farah, who will be running the 10,000m in the European Cup this Saturday.

Mo Farah’s winning time is also a European best for the year. Micah Kogo finished second in 27:49 ahead of the Briton Chris Thompson who clocked 28:17.