2014—A Triumphant Year for the Marathon, Captured in Our International Round-Up 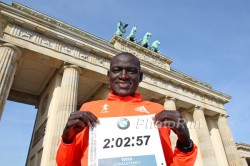 Dennis Kimetto became the first man in history to go under 2:03 in the marathon. © www.PhotoRun.net

On the last Sunday in September, Dennis Kimetto crossed the finish line of the Berlin Marathon—and an incredible new world record was in the books. His amazing performance was the symbolic exclamation point in a thrilling year for the sport. Running through crowds of cheering spectators in the German capital, the Kenyan athlete recorded a time of 2 hours, 2 minutes, and 57 seconds—the first time anyone in history had broken the elusive two-hours-and-three-minutes barrier.

His triumph came just five months after another remarkable feat at the Boston Marathon, where Ethiopia’s Benunesh Deba dipped under the 2:20 barrier. All in all, it was a very good year for marathon fans around the world. Now Take The Magic Step looks back on the events that made it so exciting, and selects upcoming races to watch for 2015. 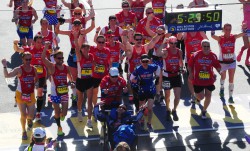 Dick and Rick Hoyt, together with Uta and the charity runners of Hoyt Foundation, at the finish line in Boston. © MarathonFoto
These marathons in 2014 turned out not to just be competitions for the elite but also festivals of joy for running fans everywhere. Hundreds of thousands of athletes took to the streets around the globe, with countless participants dedicating their start to a good cause. Among the notable charity runners were the men and women of the Hoyt Foundation who participated in the Boston Marathon, joined by Uta, who has coached the team for many years and is now preparing the runners for this year’s edition. She ran substantial sections of the route with the members of the team and ultimately crossed the finish line alongside the team and Dick and Rick Hoyt. For the legendary father-and-son-runner-and-wheelchair duo, it was their 32nd and final consecutive Boston Marathon together which made that weekend especially poignant. 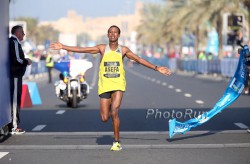 Wilson Kipsang triumphed in 2:04:29 in London. The Kenyan superstar—at that time still the world record holder (2:03:23)—set a world’s-best mark of the year alongside the River Thames. And in the fall he took first place honors at the New York City Marathon as well.

In Berlin, Dennis Kimetto and his fellow Kenyan Emmanuel Mutai were both able to break Wilson Kipsang’s previous mark, with Emmanuel finishing second in 2:03:13. He, as well as Dennis or Eliud Kipchoge, could be in a position to improve the world record again this year. 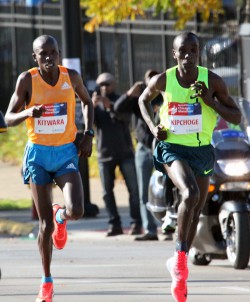 Eliud Kipchoge (right), who won the Chicago Marathon ahead of Sammy Kitwara, has the potential to improve his personal best. © Helmut Winter
Eliud won the Chicago Marathon in fast 2:04:11 ahead of another Kenyan—Sammy Kitwara (2:04:28)—in October. The former 5,000-meter world champion has never run slower than 2:05:30 in any of his four marathons and achieved his personal best of 2:04:05 when he finished second at the Berlin Marathon in 2013.

After lengthy injury problems, the former Kenyan world-record holder, Patrick Makau (2:03:38 in Berlin 2011), returned to the sport in December and was able to run an impressive 2:08:22 at the Fukuoka Marathon.

No fewer than eight runners reached times of under 2:05 in 2014—seven of them from Kenya, emphasizing how strong the Kenyan athletes currently are over the classic marathon distance. Kenenisa Bekele, who won his debut in Paris in 2:05:04 last April, has helped to raise the elite profile of Ethiopian marathoners. After not being able to meet his own expectations during his second marathon in Chicago—he was fourth in 2:05:51—Kenenisa now works with the renowned Italian marathon coach Renato Canova. At this year’s Dubai Marathon on January 23, he unfortunately had to drop out of the race due to hamstring problems in both legs. However, Kenenisa is an athlete with great potential and we look forward to watching his future marathon appearances.

For the American men, 2014 was also a remarkable year. For the first time since Greg Meyer’s victory in 1983, an American athlete was able to win the prestigious Boston Marathon. The 38-year-old Meb Keflezighi broke the finish-line tape in Copley Square in 2:08:37.

The Women: Hope and Anticipation for the New Marathon Year

The women celebrated times below the 2:20 barrier on Boston’s point-to-point course, with Bezunesh Deba (Ethiopia) clocking 2:19:59 on the hilly Massachusetts terrain. Her countrywoman, Tirfi Tsegaye, recorded a 2:20:18 in Berlin this past autumn. Rita Jeptoo of Kenya, who won the 2014 Boston Marathon in 2:18:57 and later in fall also the Chicago Marathon, was suspended for two years by Athletics Kenya on January 30, 2015. She had tested positive during an out-of-competition drug test in September 2014. 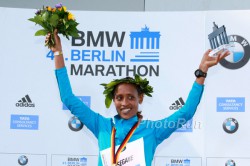 Tirfi Tsegaye triumphed in Berlin with the official world’s best of the year. © www.PhotoRun.net
In London, there were also finishes under 2:21. Edna Kiplagat won in 2:20:21—three seconds ahead of fellow Kenyan runner Florence Kiplagat (who is not related to her). Tirunesh Dibaba, the Ethiopian 10,000-meter Olympic champion, placed third in her marathon debut in 2:20:35. This year, however, she will most likely take a baby break from racing.

Happily, 2015 has already shown much promise for women elite marathoners. Ethiopia’s Mare Dibaba crossed the finish line of the Xiamen Marathon in China on January 3 with a fast 2:19:52. On January 23 in Dubai, her 19-year-old countrywoman, Shure Demise, set a new unofficial women’s Junior world record in 2:20:59. Additionally, for the first time in the history of the marathon, a total of twelve women runners dipped under 2:25:00. This race, held annually in the United Arab Emirates on a very flat course, has become a popular event among Ethiopian marathoners in recent years. 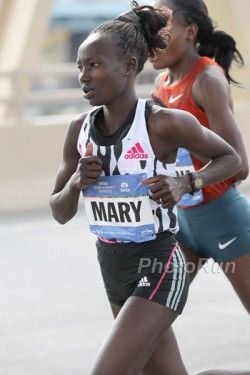 Mary Keitany celebrated a great comeback with her victory in New York. © www.PhotoRun.net
Another name to watch: the return of Mary Keitany (Kenya), who came back from a baby break to win New York in November, could herald very fast times in 2015 in the women’s races.

Still, Paula Radcliffe’s marathon world record of 2:15:25—set in London 12 years ago—will probably remain out of reach for now. Florence Kiplagat showed great potential with her fantastic half-marathon world record of 65:12 in Barcelona, but the 27-year-old has not yet been able to show the same speed in the marathon. Perhaps 2015 will be her year.

American runner Shalane Flanagan also had a great year. Her strong seventh place at the Boston Marathon in 2:22:02 was among the highlights of the 2014 marathon season. Then, in the fall, she ran a personal best of 2:21:14 and placed third at the Berlin Marathon. On her way to the finish line at the Brandenburg Gate, Shalane was also able to set a new American record when she passed the half-marathon mark in 1:22:36.

The Fastest Times in History (2014 Results Printed in Bold)

Times in the Boston Marathon cannot be recognized officially as world, continental, or national records since the course does not conform to the correct criteria (Max. drop of one meter per kilometer, start and finish cannot be situated more than 50% of the total running distance from each other. The drop on the point-to-point course in Boston comes to 139m.).

Calculated on the average of the top-ten times in each race.

*Rita Jeptoo was suspended for two years by Athletics Kenya on January 30, 2015. She had tested positive during an out-of-competition drug test in September 2014.

The Fastest Times in History

Calculated on the average of the top-ten times in each race.