Settle Conflict on the Run in the Berlin Peace Run 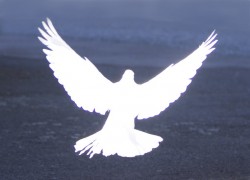 What a picture! Half a million people celebrating in front of the Brandenburg Gate in Berlin, black-red-and-gold flags fluttering as the German football team bids farewell to the fans. All the while the pop poet Xavier Naido singing, “The road ahead will not be easy.” That was all a couple of months ago. Soccer’s World Cup, a massive festival, is now long over, the feeling of exhilaration has faded, the “Fan Mile,” where people from all over the world met as friends, has been taken down. Yet the spirit of peaceful togetherness seems to have found a home: on July 17, the road in front of the Brandenburg Gate was the stage for the first Berlin Peace Run.

For years the forum known as the Civil Peace Service has been calling for peace runs. They give young people, especially, a chance to show how much a peaceful future means to them. Children and young people feel wars or conflict in the world especially keenly, whether through television or radio or adults’ conversation. In their everyday life, too, they often face confrontations – in school or at home, in arguments with brothers and sisters or their parents. One idea from the peace runs is that participants work at overcoming hatred, violence and intolerance. That’s a tough challenge, which one participant, 10-year-old Matthias, expressed as, “I ran because I wanted to make life better for children who are caught up in the war.”

In response to the question of where the war was, Matthias said, “I think in Lebanon, because of Hezbollah.” He ran five laps, a bit under five miles, around the Brandenburg Gate, an edifice rich in symbolism. He had made a pact with his parents that for every lap he ran, he would receive five Euros. His neighbors gave Matthias one Euro per lap. Money raised in this way from peace races is channeled into projects to bring mediation in cases of civilian conflict. The Civil Peace Service currently supports 11 projects in Palestine and southeast Europe.

The first Berlin Peace run concentrated this year on children, young people and adults. The Berlin Senate wrote to schools, inviting them to take part. Came the day, about 700 Berlin schoolchildren stood on the start line – not to be first across the finish line, but to run as many laps as possible together. “Completely shattered,” was Ivelina’s reaction afterwards. “The first two laps were especially hard,” the 10-year-old said. Her main sport is field hockey, but when asked her at school if she wanted to be part of the Peace Run, she didn’t take long to decide. “I think it’s great,” she said.
In the build-up to the Run, schools and youth organizations were offered an accompanying educational program in which trained peace personnel spoke about non-violent conflict resolution. This program was also intended for mediators in school, who intervene in pupils’ disputes and try to settle them. It’s not only on the grand, diplomatic stage of state affairs that it’s possible to bring about peace. Calming and clarifying words are often needed in school, among friends, in the nursery or at the meal table.

Combining sport with an active commitment to peace was also a need for 25-year-old Mareike. “I’m not really at all sporty, but because of the cause I ran a lap,” she said. The student is heavily involved in aid work for the developing world, and is a member of organizations and online associations. She knows how much public awareness peace efforts require, and that the way ahead will not be easy, that you have to get yourself moving to make a contribution. Mareike did just that. And, she said, “It felt really good.”