Learning by Playing: 205 German Schools Will Represent a Nation 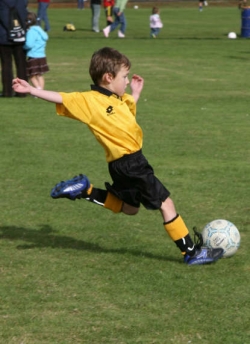 The ambassador of Ecuador in Germany, masters the art of diplomacy: he is always friendly yet reserved. With a smile on his face, he managed to place three penalty shots right into the goalkeeper’s arms. The true strength of Central American soccer will be revealed to the world in a few weeks, when the World Cup starts in Germany. It was another message that counted at the Ecuadorian diplomat’s visit to a German school in Potsdam: Fair play for a fair life. This is the motto of a soccer tournament for German schools during the real World Cup. The underlying idea is to unite sports, educational, social and multicultural aspects.

A total of 205 “World Cup” schools will take part in the project. Assigned by a lottery they will each represent a nation which belongs to the FIFA (Fédération Internationale de Football Association). A school from Hamburg will represent the Bahamas, a school from Berlin will be Jamaica, a Middle School from Hartenstein will represent the U.S.A. The 32 best teams will compete in a big final in Potsdam, near Berlin, in June. Last fall, all the teams took part in the so-called “Continental Championships.” Depending on the nation the school represented, the teams played in different flights called the European Cup, the African Cup of Nations, the Asia Cup or the Copa America. While the “real” soccer stars like Ronaldinho & Co. will wait in the big arenas during the tournament from June to July, 1000 Mini-Kickers, 12 and 13 years old, will go hunting for goals on small playgrounds.

The children’s teams are called “National Teams.” A “National team” consists of four players, playing according to the rules of “Street Soccer”: goals kicked by boys only count at the end of the match when a girl has scored a goal during the game, also. After the match, points for fairness will be awarded in addition to the points scored for goals. There is no referee in Street Soccer. The young players are supposed to learn to solve conflicts by themselves, explains the project’s founder, Sports Scientist Jürgen Griesbeck. “Soccer’s great potential is to be used as a training ground for social talent.”

For years, Griesbeck has worked hard to put this idea into practice and has traveled to several conflict regions of the world such as Argentina, Bolivia, or Rwanda. His commitment was caused by the deadly gunshots fired at the Columbian national soccer player Andres Escobar, a few days after his own goal at the World Cup in 1994. Since then he has tried to use soccer’s social power to bring awareness, peace and a sense of fair play in a socially acceptable way.

All 205 participating schools “adopted” a nation over a year ago. Students might have asked themselves where Swaziland, Guinea or Bhutan were located. One of the project’s ideas is not only to play soccer but to find out about the society, culture and geography of the country the students represent. Through this the kids learn about the living conditions, customs and traditions of other people and get an idea of the economic and social situations in other countries.

The representative teams of the professional world of soccer, however, will be turned upside down. Teams, who are hardly present on the real soccer world map, will go on to play in the finals, while the big nations may only be spectators. In the opening game, for example, South Africa plays versus Cuba.