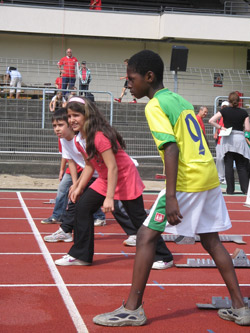 Track and field, also known as “Athletics” in many countries, is popular all over the world. And kids love this sport. They naturally like to jump far, jump high, and, of course, love to run as fast as possible. With the 2008 Olympic Games just a few days past, many athletes and fans are already looking forward to the next big athletics highlight—the 2009 track and field World Championships in Berlin. We had the opportunity to spend a little time with young talents, who already might be dreaming about becoming part of the Olympics or the World Championships one day. Take The Magic Step® author Piet Könnicke reports from the Berlin Mini World Championships.

You might say Niklas’s preferred running style is “short and fast.” The 10-year-old is a striker on his soccer team and one of the fastest fifth-graders within his district in Berlin. In fact, his sprinting ability and overall nimbleness helped him qualify for the Berlin Mini World Championships, which premiered in Berlin this past June.

In light of the upcoming Athletics World Championship in 2009, Berlin not only wants to promote its internationally renowned events, such as the Berlin Marathon and the ‘Internationales Stadionfest’ (ISTAF), but also has the goal to draw attention to the future generations of track and field athletes. The plan is focus on the experiential value and the joy athletics can bring closer to the children. In the first Berlin Mini World Championships, more than 1000 fifth- and six-graders from Berlin’s 12 districts met near its Olympic stadium to compete in this first annual kids’ sporting event.

Apart from the competitions on that day, the Berlin Mini World Championships had another goal: to help bring track and field to the forefront in schools. Students name sports games as their main activity during physical education (PE) classes. The classic track and field disciplines such as the long and high jumps, ball throws, or 60-metre sprints are rarely more than a compulsory exercise in their current curriculum. Ludwig Forster, an experienced PE teacher in Berlin, acknowledges this, but states that due to the relatively few PE lessons offered in schools, it is not possible to dedicate a lot of time to any one sport. However, “the primary goal of teaching a great variety of sports is not achieved at many schools either,” according to Forster.  But he also knows that due to its lack of specialization physical education at school cannot produce future world champions. Therefore “talents can only be developed and promoted if close links to sports clubs exist,” Forster says knowingly, as one of his former students made it into the world gymnastics elite.

Through this Mini World Championships, the Berlin senate wants to close the gap between sports clubs and schools. The Mini World Championship coordinator Bernd Kunze, who is working for the Berlin education senate, imagines the Championships to be something of a mediation opportunity; his vision is supported by the 2009 Berlin Organising Committee, the Regional Sports Association Berlin, and the Berlin Athletics Association. In the event, which they hope to hold again next year, there were seven separate disciplines in which 10- to 12-year-olds could get an idea of just how good they will have to be to one day become a world champion. Events included the long and high jumps, the 800m, the 50m and 75m sprints, and two ball-throw disciplines.

The importance and necessity of a close cooperation between schools and sports clubs is evident in the life of 10-year-old Philomena. As the fastest in the 50m at her school, she qualified for the final of the Berlin Mini World Championships, in which she raced against the best sprinters of her age from other Berlin districts. “Running is fun,” she said, shortly after crossing the finish line. Despite her natural abilities, however, she is no longer in a sports club as her schedule is just too busy to allow for two weekly training sessions.

The creation of the Berlin Mini World Championships is an innovative and above all active response to the results of a study undertaken with the help of the European Athletic Association (EAA) a few years ago. The findings indicated that although children have a substantial interest in the major disciplines of track and field, such as jumping, running and throwing, their interest fades with increasing age. Accordingly, only one percent of young track and field athletes stick to it after graduating from high school. For this reason, the pure excitement at sporting events may be as important as the participant’s actual success. In addition, children and young adults get a chance to experience track and field in a rather playful way, while the sometimes rigid rules of competition only play a secondary role.

Therefore, in this year’s event, rather than have 4 x 100m relay teams, there were—opposing the rules of competition—8 x 50m ones. And in the sprint final, it was not just about glamour and prestige, but rather something even more essential: winning the title of the “Speedy Sock.” To help motivate the young participants to imagine even greater possibilities, each wore a bib number with the official logo of the 2009 IAAF World Championships.

On the stage of the Berlin Mini World Championships, tomorrow’s potential talents now ought to be discovered, revived and motivated. The kids and their parents shall also develop a long-lasting joy and interest in this sport through this experience and the individual successes during the event.