Berlin Mini-Marathon Gives Kids the Run of the City

“Hey,” calls Laura, “we’d better get a move on, there’s almost no one behind us.” Her friends turn around, and see that it’s true: there aren’t many left behind them. Close to 10,000 children were running ahead of Laura. They set off a kilometer further back on Potsdamer Platz, in the glittering heart of Berlin, where a little later tension will rise at the 38-kilometer mark of the Berlin Marathon. This will be where Haile Gebrselassie starts to drop off the pace in his bid for a world record, this is where thousands of runners become aware of just what the marathon demands and yearn for the finish line. For 9,437 schoolchildren, it’s the start of the Mini-Marathon. The 4.2195 kilometers they run are the last stages of the original race. The course goes down Leipziger Strasse, past the seat of the Upper House of the German parliament and along to Schlossplatz, with the Berlin cathedral rising up behind, then continues along Unter den Linden, at the end of which the Brandenburg Gate signifies that the home straight is near. 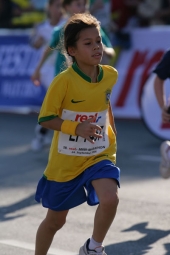 The Mini-Marathon is the most spectacular run for schoolchildren in Germany. Just seeing close to 10,000 children on the move is something. When 20,000 shoes hit the asphalt, the result is a mighty wave of sound making its way down the street, between the towering buildings of Berlin-Mitte. Way out in front are the really excited ones who are racing it, flying over the asphalt with long strides. They are followed by runners who want to run well to help their team: ten runners from one school constitute a team, and their times are combined to produce a time for an entire marathon. In the second half of the field, the mood is more relaxed. The children chat, look around or even start to walk to catch their breath after a couple of hundred meters. After a short burst, Laura and her friends have settled down to a more leisurely pace, which leaves them free to chat. What’s more, her knee is bothering her, she says.

The time of the fastest team was 2:29:49. But the Mini-Marathon isn’t just about winning. For most of the runners—just as for the adults entered in the marathon itself—it’s about being part of an experience. Having the best streets in Berlin all to yourself with a police escort, cheered on by strangers, running through showers built by the fire brigade—those are exciting and uplifting moments. The marathon contains all manner of fascination. For some, it’s about the historical myth, for others a mass participation event, many are simply amazed at the suffering they can go through. For nine-year-old Julian, the attraction of the run was reaching out for a cup of water at an aid station and throwing it away a couple of meters later. “I’ve seen them do that on TV, and I just had to do it,” he says. Then he grabbed a sponge and squeezed it over his head, and loved the way the water ran down. Moritz and Marek had a great time, running between the chairs at the pavement cafes that gave their guests a front-row seat to watch the marathon runners on this sunny morning.

The Schoolchildren’s Run has been part of the Berlin Marathon for many years. The number of participants has grown steadily, and next year more than 10,000 are expected for the first time. When the schools return after summer vacation, preparing for the Mini-Marathon is one of the most important topics of discussion in the city and surrounding areas. Sports teachers become team managers, fathers turn into running coaches and mothers into the most loyal of fans. “You’ll do it, I’m proud of you,” is displayed on numerous placards held up by the side of the course for the children to see. Mira knows that she can do it: “I’ve already run the whole course once,” the six-year-old says. And though she is rather tired at the end, she, like many others, puts on a spurt across the line. Laura also finishes. The knee doesn’t hurt anymore—what matters is looking good for a newspaper photographer taking a shot. And would she one day run a full marathon? ”Yes,” she says, “perhaps one day.”