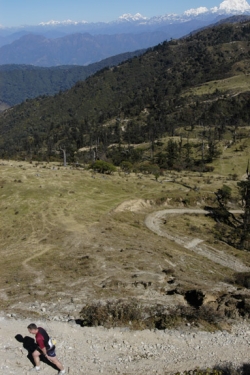 One afternoon long ago, a friend and I were running up a long hill in heavy rain. The wind, it should go without saying, blew directly into our faces, making us feel more like we were running in place than progressing toward the top. Neither of us had said anything for awhile when a particularly harsh gust pushed us back down the slope. Bent over, struggling to maintain my balance, I screamed, “This is ridiculous!!!” My friend laughed and said, “The sad thing is, this is the most fun we’ve ever had.”

He was being simultaneously sarcastic and sincere. Sarcastic, in that it was easy to enter the minds of people driving past us: Who are these idiots, and why didn’t they just stay home and run their knuckles over a cheese grater? Sincere—if a bit overstated—in that little of what we had experienced in our first 16 years was as enjoyable as that day’s run.

Granted, we were teetotaling virgins at the time, but hear me out on this one. Here’s just a bit of what made our run more than unmitigated misery: 90 minutes of camaraderie; an undeniably out-of-the-ordinary challenge; the delicious sense that we were disregarding normal ideas about how middle-class Americans should spend their time; the accompanying feeling that, in doing so, we knew a few things that the people shaking their heads in passing cars didn’t know; a primal participation in nature; knowledge that our waterlogged-rat status wasn’t eternal; full sensory engagement; a feeling of accomplishment more meaningful than what the rest of the day held for us; and, now, a memory that still binds us more than a quarter century later (Once we were no longer teetotaling virgins, I was toast giver and best man at his wedding.) Other, supposedly more fun excursions from that time—family vacations, field parties, Boy Scout camping trips, trying to pick up girls at the rollerskate rink—can’t compare.

I’m aware that I’m probably in the minority here. Just today, for example, I happened upon an online article titled, “The Future of Fun.” According to the article, we’ll all soon be having more fun than ever, thanks to bigger, flatter television screens, high-definition video that “will be augmented by realistic sound capable of simulating a whisper in your ear,” devices that will offer portable cable TV feeds for “those folks tired of being tethered to the sofa” and a new generation of remote controls that will make directing all of this fun a snap.

Now, I enjoy a simulated whisper in the ear as much as the next person. But running taught me long ago that the article’s underlying concept of fun—passively receiving manufactured entertainment—is for the sort of people who say, “I never see runners smile,” not the recipients of this most tired of observations. (Quickly: First, you aren’t looking hard enough. Second, even if it were true, what of it? It would be interesting to interrupt such people during dinner and ask why they aren’t smiling.)

We runners know that fun means more than grins and gaiety. I like the definition offered by the evolutionary biologist Richard Dawkins: that which isn’t boring. (My wife disagrees, saying that something can be scary but neither boring nor fun. How, then, does she explain the enduring popularity of horror movies, gravity-challenging amusement park rides and Dr. Phil?) Dawkins’s definition includes some of my favorite activities that even the “Future of Fun” crowd might accept as enjoyable: banging on my drums in the basement; taking day hikes with my wife; playing fetch with our dog on the beach; tackling the brain-busting Saturday New York Times crossword puzzle.

But Dawkins’s definition has special resonance because it encompasses so much of the running life. Once you have the basic fitness to get through a run without constant complaints from your body, pretty much every time you head out the door is different. Wacky weather? Testing the limits of your endurance? Exploring new routes? Pushing to run the eighth repeat of a workout faster than the seventh? It’s all good. Even if you’re touring the neighborhood for the thousandth time, pay attention, and you’ll experience new sights, sounds and sensations. “It can enthrall a good mind for a lifetime,” Dawkins writes about science. The same is true of running.

One evening recently, a friend and I arrived in New Delhi, India, after a seemingly eternal journey from the U.S. With the local time approaching 1:30 a.m., it was obvious what to do next—go for a run. I’m happy to report that we got lost just a few times, a mere two packs of snarling dogs chased us and the air pollution, visible on the horizon even at that time of night, really bothered us only when we tried to breathe. Toward the end of our run, a motorist slowed from the city’s average speed of 429 miles per hour and yelled to us, “What are you, crazy?”