The Fit Life: Make Yourself Useful! 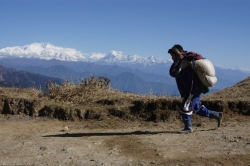 One of my former employers was ever-so-conveniently located a few hundred yards from the bike path that traverses Rock Creek Park in Washington, D.C. From my then-home in Maryland, the office was a splendid run down an unpaved converted rail bed, over horse trails and along the bike path that parallels the gurgling waters of Rock Creek. Commuting by foot on this route once or twice a week quickly became the best part of my job. (To be fair, saying so doesn’t really do the run justice.) I loved the feeling of reaching the office at 8:00 a.m. with 12 miles already in for the day, despite not having to get up much earlier than usual. Unlike most of my colleagues, I arrived in a good mood, ready to get right to work rather than waiting to be jumpstarted by bad office coffee. Plus, I’d saved a whopping $1.80 in subway fare.

Most important, I felt satisfied in being able to answer my brother’s accusatory query of two decades earlier: Why don’t you do something useful with your running? He didn’t mean what might be assumed today by such a question, as in, What charity are you raising money for this month? He was speaking in simple utilitarian terms: If you’re going to expend all this energy, why not direct it toward something tangible?

For all the arguments I can make for running being a supremely worthwhile end in itself, my brother’s question has always stuck with me. He raised it about the time I read that Bill Rodgers liked to justify his habit to outsiders by saying that, if his car broke down, he could easily run to the nearest service station. As a teen, I always hoped the family wagon would suddenly die so that I and my mitochondria-rich legs could come to the rescue, but no such luck. Keeping hope alive, once I got my own car, I always kept a pair of trainers in the trunk. Driving a 1988 Ford Festiva for almost 15 years, I was sure, would lead to some such crisis, after which I would snottily inform my brother of just how helpful all those years of running were. Again, no such luck. Now, with everyone in the world owning a mobile phone, that opportunity is likely lost forever.

But running to work? There’s using running to meet a predictable, recurring need. Think of the money saved, the crowds avoided, the fossil fuels conserved. Running home from work, I came to learn, was even better. To walk through the front door knowing that I was done for the day with both vocation and avocation, to just be able to lie down and relax…why, this must be what it’s like for normal people, I would think. The most upsetting thing about leaving that job was losing the chance to commute on foot. My subsequent office was located 38 miles from home, mostly via the Washington beltway. Now, I love running, but come on.

The few other ways I’ve answered my brother’s question in the last three decades have been more invention than necessity—dashing off to the grocery store as a kid when my mother realized she needed a few items, or running home from the mechanic’s shop. To the extent my running has been “useful” in the sense my brother means, it’s been when transferring the fitness gained from running to another activity, such as, ahem, helping my brother move. But a cyclist would have been just as helpful there.

I retain one fantasized answer that my brother, a criminal attorney, would surely appreciate. That’s the scenario in which I and I alone from a crowd of bystanders give chase to a purse snatcher. As the sedentary stand by helplessly, I eagerly pursue our young ne’er-do-well. (Invariably, he’s a good 15 years younger than me, to heighten the incident’s promotional value.) Rather than simply run him down as quickly as possible, I hang back approximately 16 feet—close enough that he knows I’m there, far enough away so that he still thinks he’s going to get away. After a few minutes, he looks back with a mixture of concern and confusion, but I keep my distance. A few minutes later, he looks back again, this time with the unmistakable evidence of encroaching oxygen debt on his face. I catch his glance, smile and wave. Another few minutes, tops, he gives up and drops the purse. Word of my feat quickly spreads. A whole new segment of society is inspired to take up this most useful of activities, and soon the U.S. boasts the world’s fittest street criminals.