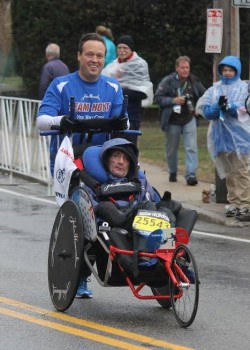 It was at the left turn onto Boylston Street, packed on both sides by cheering spectators, that they finally glimpsed through the rain the finish line of the Boston Marathon. And there, with almost a half mile to go, Bryan Lyons brought Rick Hoyt’s wheelchair to a halt.

“I wanted to share a few words with him because I knew there would be no opportunity afterwards,” Bryan told Take The Magic Step. “It was very personal and emotional, but I basically just thanked him from my heart for having me run with him.

“Then I saw there was rain and some road debris on his face, so I wiped it clean. I knew the cameras would be in his face soon, and I wanted him to look his best at the finish line.”

That task completed, the “new” Team Hoyt ran on through the wind and the rain and the cold they had battled for 26.2 miles to finish their first Boston together in 4hrs and 30 mins.

And the huge smile on the face of 53-year-old Rick—born with cerebral palsy and unable to walk or talk—said it all. 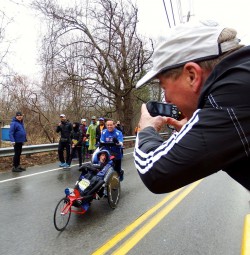 Dick took photos of Bryan and Rick from inside his Jeep. © Jennifer Edwards/DMSE Sports

Fittingly, the first person to greet them was Dick Hoyt, Rick’s 74-year-old father and his running-and-pushing partner in the legendary wheelchair team for the previous 32 Boston Marathons.

Along the way they became an inspiration to countless people around the world and such beloved icons of the Boston race that a bronze statue of the courageous duo stands near the starting line in Hopkinton.

But, inevitably, the years caught up with Dick, and for the 119th Boston Marathon this year he handed over the pushing duties to Bryan, a 45-year-old dentist from Methuen, Massachusetts, who has forged a close friendship with Rick since he joined the Hoyt Foundation in 2009.

As the skies opened and temperatures fell, Dick, honored this year as the Grand Marshall of the Marathon, and Uta, who trains the Hoyt Foundation runners, waited with anticipation to greet them at the finish line. 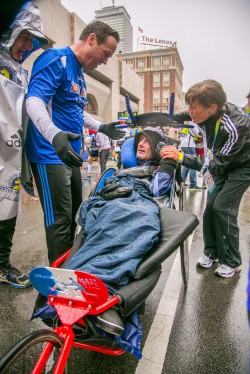 “Rick and I were both so excited,” said Bryan. “As we got closer to the finish line I could see Uta and I could see Dick and it was like we were running into their arms. It was a very emotional moment and tears were shed as Dick thanked me for running with Rick.”

They had rehearsed for Boston with several long races. But on this day, the conditions could not have been more demanding. “Rick had a heated seat in the wheelchair, but we stopped a handful of times along the way to make sure he was comfortable,” said Bryan. “I’m not fast with the method he uses to communicate, so I’d decided to ask him only ‘yes or no’ questions. ‘Are you warm enough? …do you want anything to drink? …are your clothes dry?’ If he shook his head, no, I took care of it. If he nodded yes, we moved on. But he was upbeat all the way.”

At the top of Heartbreak Hill, three and a half hours into the race, the pair stopped briefly at the Team Hoyt aid station, manned by some long-time members who were not running Boston this year but wanted to help those who were. The duo left to ringing cheers—and with an additional warming blanket for Rick. 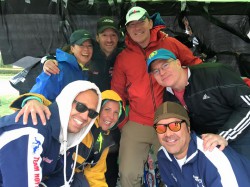 The Team Hoyt aid station. © Maureen Hayes
Ageless Dick, who will still be seen pushing his beloved son Rick over shorter distances, had followed the familiar course earlier in an easier fashion than he was accustomed to: as Grand Marshall he led the 30,000 runners into Boston in a Jeep adorned with his name. Making him feel right at home, spectators whose faces had become familiar over the years warmly applauded him from the same viewing spots many occupied when he was running.

For Bryan, the race meant more than simply running 26.2 miles. Unaccustomed to the limelight, he found himself an unexpected celebrity in the days before he and Rick went to the start line. 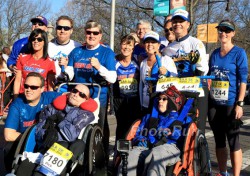 He and Dick and Rick received a standing ovation at the official B.A.A. press conference to introduce this year’s elite athletes.

Then Dick called him to say the Boston Red Sox wanted him to throw out the first pitch at an American League game. “My first thought was, ‘Oh no!’ said Bryan. “I remembered that on opening day, Tom Brady, the Super Bowl champion quarterback of the Patriots, had thrown out the first pitch, his ball had hit the dirt—and he was booed by the crowd,” said Bryan. “I thought, ‘If Tom Brady gets booed and has the crowd let him know his pitch was lousy, what chance do I stand?’” 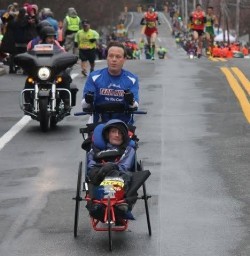 But as Dick and Rick looked on, Bryan’s pitch landed safely, to cheers from a sold-out crowd, in the catcher’s mitt.

“But that wasn’t the last I heard of it,” he laughed. “All along the road from Hopkinton to Boston I heard people yelling, ‘Great pitch at Fenway …better than Brady!’”

Early on the morning after the race Bryan was back at work at his dental practice. But the memories lingered…

There was the moment Meb Keflezighi and the other elite runners who had started after Team Hoyt passed them at eight miles. “I joked with Rick that we held off Meb for eight miles,” he smiled.

Then there was the satisfaction of having a finish time pushing Rick that was only 16 minutes slower than his own best solo Boston time. 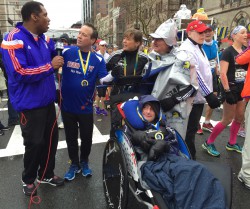 Bryan, Rick, and Dick during the interview after the race. © Courtesy of Joe Giza

And the time when former Olympic marathon champion Joan Benoit Samuelson caught up with them “and came running over to us to wish us luck.”

Bryan’s only regret? “Because I was running behind him I couldn’t see the huge grin on Rick’s face when we crossed the finish line.”

Footnote 1: See Rick’s huge grin during an interview at the finish line…

Footnote 2: The Hoyt Foundation’s reputation as ‘The Little Charity that Could’ was enhanced yet again this year. Ten years ago, when the team first formed to support Dick and Rick, its lone runner raised just $2500. In 2015, 28 Hoyt Foundation runners completed the marathon, raising more than $180,000 between them—and taking the total raised for the charity’s causes helping people over the decade to an amazing $1 million-plus. 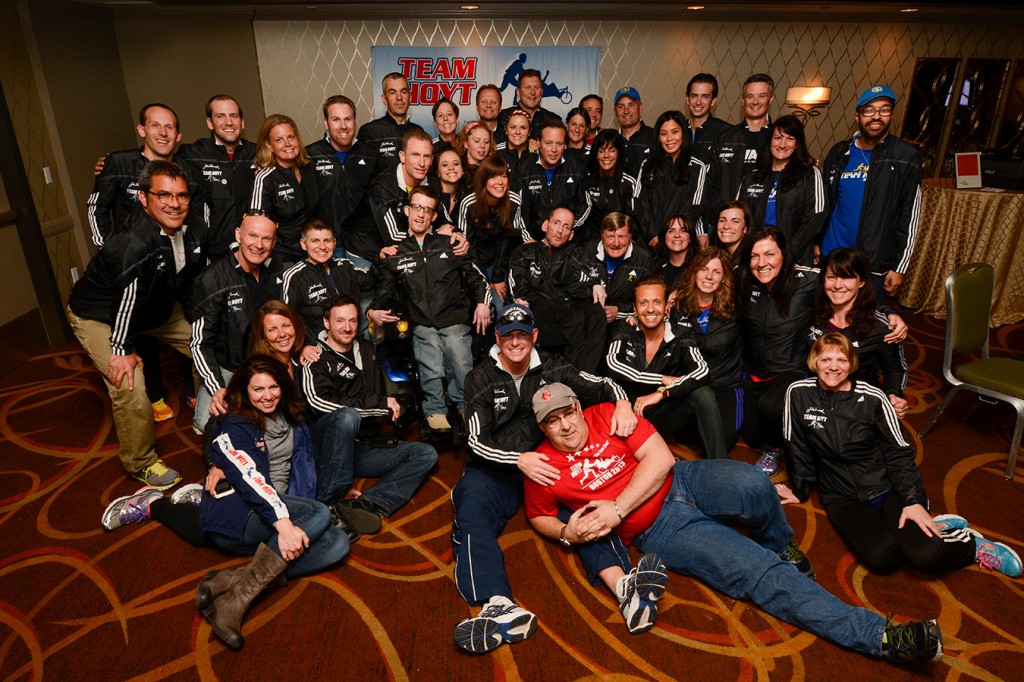