The Fire Still Burns: An Interview with Bill Rodgers 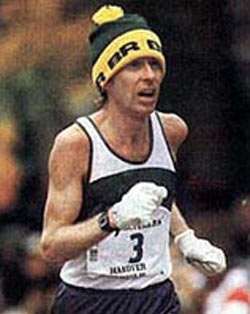 Bill Rodgers is the only runner to ever win the Boston Marathon and New York City Marathon four times each. He was a member of the 1976 U.S. Olympic team in the marathon, and was ranked the top marathoner in the world three times. In addition to several marathons in North America, Bill also won marathons in South America, Europe, Asia and Australia. Since his peak years, Bill, now 58, has remained competitive in his age group—for example, after turning 50, he ran 53:07 for 10 miles—but has increasingly turned his considerable energy and drive to being an ambassador for running.

In the summer of 2003, Bill broke his right tibia on a run. More recently, he has seen his race times slow dramatically. Take The Magic Step® team member Scott Douglas, who has written two books with Bill, spoke to him about maintaining motivation for running during tough times.

In June, you ran the Bellin Run 10K in 51:00. When a lot of people saw that time, they were wondering what was up with you. And then a couple of weeks later, you and I ran together, and you were visibly and vocally frustrated at how slow we were going. What was going on then, and how are you doing now? 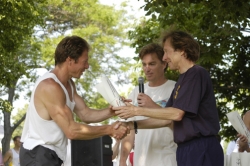 Bill Rodgers: It’s not a cardiovascular issue, where I can’t go faster because I’m out of breath, that I’ve been struggling with. It’s more of a balance issue affecting my stride, combined with a little fatigue. I’ve learned that what I need to do is more stretching. My left leg is a half-inch shorter than my right leg. That natural imbalance—which my brother and sister also have—has been exacerbated by 40 years of running on the left side of the road. And I’m not sure, but I suspect it’s been exacerbated even more since I broke my right leg.

Once I started stretching it more, I was able to run a little quicker. In August, at Falmouth I was able to run 7:00 pace [per mile for 7 miles], and then at the 30th anniversary of the Crim 10-miler, I was able to run 70:00 on a humid day. So that’s progress, which is always good to see. I’ve been able to start doing some longer intervals, which I hadn’t been able to do hard for a while, because I was struggling so much with my balance being off that I had to run slow and watch my stride. My goal is to get my race pace back down to 6:00 a mile. Six months after I broke my leg, I ran 6:00 pace for a half marathon, and 36:00 for 10K at the Bellin Run, so I think I should be able to get back to that level.

But it’s also been a busy year. I do a lot of traveling, which is very fatiguing. Like last weekend, I did a fun run with folks from Fidelity in Boston, then on Saturday I ran a leg of the relay at the Akron Marathon in Ohio, and then on Sunday I did a 5-miler in Southington, Connecticut.

You know, Scott, I should say that I love the smaller races like that 5-miler in Connecticut. I really like the idea of people running shorter races first as building blocks to marathons. It’s good for people to get experience first at these smaller races instead of just suddenly throwing themselves into these mega marathon events. That’s why the marathon relays are good, too—they’re a way to motivate people to get out there and take part and get an idea of what the marathon is about. Believe me, I have nothing against the marathon quest—I understand it completely. But I wish more new runners got experience at the shorter races first before moving up.

What other sorts of appearances do you do?

Bill: Over the years, I’ve done on-site school talks and runs with kids. For example, I used to visit three to four schools in a day in Mobile, Alabama, in January, and talk and run with the kids. The school principals loved the program, as did the teachers and the kids, and I loved it as well! In New Hampshire, I worked with the Gate City Striders with their running and fitness program, which culminated in Fitness University. This was a one-day event where parents sat in the bleachers at a stadium and cheered for the kids as they ran and graduated and received a diploma. I loved that program—it was pure fun, and great to see the parental support. I have always noticed that parents are keenly interested in running and fitness programs for their kids as I’ve traveled across the country and done running clinics.

On the corporate side, I’ve been involved with the JP Morgan Chase Corporate Challenge series of 3.5-mile races. There are about 20 of these events, and many times I’ve visited corporations that had teams and answered questions and did runs with the employees. I see a huge undeveloped area here in terms of corporate America standing up and doing much more to encourage employee fitness and health. I also took part in John Hancock’s running and fitness clinics in Massachusetts, and we often visited schools or spoke to Hancock employees who were beginning runners. Actually, all my competitive career I’ve been doing events like this, primarily via road races.

As a parent, I try to go support my daughter Erika and her cross country teammates—warming up with them, giving them water, answering their questions, etc.

Obviously, you’re going to keep traveling to a lot of events—that’s part of how you make your living. But you don’t have to run them, and you certainly don’t have to race them. Why do you still compete?

Bill: It’s always been part of my psyche. Some people don’t care to race anymore. [1983 Boston Marathon winner] Greg Meyer runs most days, but he doesn’t want to race. Some people just don’t want to, and that’s fine—I salute them for getting out there. But for me, I love the competition. The fire still burns—and I’m pretty sure it’s not just burning coals!

You once told me that one of your heroes was Johnny Kelley. He eventually stopped racing.

Bill: Well, he still ran Boston every year. [Johnny Kelley, a two-time winner of the Boston Marathon, finished the race 58 times. He died in 2004.] And at Falmouth, he still ran quite well when he was 65, and he would do other races around New England. I want to do that, too. I also think of Clarence De Mar, another New Englander, and one of the top road racers of all time—an Olympic medalist, seven Boston wins. I look at these people and I think of them as role models. Now, I did retire from the marathon, but I may do another one when I turn 60. Now my competitive urge is aimed at the shorter races. It’s gnawing at me that I want to do better—next year I want to do better at all of my races. I look at the guys who I was competitive with before I broke my leg, and I want to get back to competing with them.

When you were coming back from your broken leg, you did a lot of crosstraining to stay fit. Do you do anything besides run now?

Bill: I’ve always used light weights for upper body strength, once or twice a week. I’ve always stretched after my runs and before speed workouts and races. Sometimes I use rubber tubing for stretching. In the past year, I started using a large exercise ball to do stretching and strengthening on. Occasionally I swim for recovery and relaxation.

My balance exercises developed via my physical therapy after I broke my leg. I use a balance board to increase range of motion and strength in the ankle and calf area. Another exercise is to stand on one foot and swing the other leg in front and to the sides. You can really feel your foot muscles grab the ground! I believe strong feet will make for a better runner.

When you broke your leg, did you ever think, “Uh oh, this is it?”

Bill: Of course. It’s so easy in that situation to fear the worst, especially because I didn’t know why I’d broken my leg. I would get conflicting perspectives from people. Soon after it happened, I was going to the Ollie Road Race in Boston, which was still nice enough to bring me in. A flight attendant saw me with my wheelchair and crutches and we started talking, and when I told her what happened, she said, “Gee, my uncle’s leg buckled under like that, and he wound up having bone cancer.” I was pretty sure I didn’t have bone cancer, but that’s not what I wanted to hear right then!

I had had calf pain in that leg for some time before it broke. I guess I had been developing a stress fracture and kept running on it; maybe it was made worse by my left leg being shorter. I was really good about my rehab exercises there for awhile, but I must admit I stopped doing them. But after a while this year of struggling with my balance, I started doing them again—things like working on my balance by standing on one leg.

In a way, running and racing is maybe more fun for me now, because it’s not the end of the world if I don’t always put out a stellar performance. When I was younger, I hated to lose any race, particularly a marathon. Now, the fitness and camaraderie part of it are stronger than ever with me. Like over the summer, when you and I ran together on trails in the woods, even though I was still struggling a lot my stride then, that was just a lot of fun. That sort of thing is really important to me now.