“The Burnout Doesn’t Seem to Have Happened”: An Interview with Nicky Martin 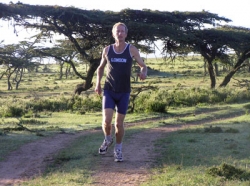 Nicky Martin is in the classic tradition of high-standard British club runners who have competed all their lives over track, road and cross country, but his is a story with a difference. He is married to a Kenyan and now spends most of the year teaching as head of science at a school in Nairobi, returning to Britain in time for the London Marathon each April where he continues to improve on his impressive performances: in 2006, he ran his fastest yet, 2:26, at the age of 42. We talked about Nicky’s views on longevity in running and whether all Kenyans are naturally talented runners. (Hint: In his opinion, definitely not!) 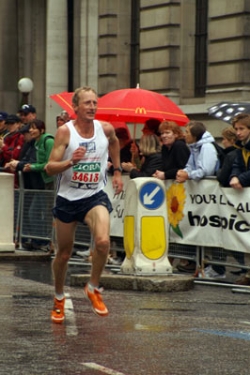 Have you been running all your life?

Nicky Martin: Yes. I started running when I went to Gospel Oak primary school because I liked the teacher and I didn’t want to be late. Then when I started secondary school my teachers encouraged me, so I would say I’ve run almost all my life, apart from a five-year break in my mid 30s when my job was physically demanding.

This comes on to the Kenyan part of your life. We’ll talk about your running career in more detail later, but tell us how the Kenyan side of your life developed.

NM: [The break from running] was when I was working in a community project for Black Rhinos, where I was walking eight to 10 hours a day, so you wouldn’t feel like running once you’d finished that. [During that time] I certainly lost weight. One of the differences when you do a lot of walking is that you lose a bit of muscle. But the way I got into that work was that I was running from a school nearby where I was teaching and the people there could see where I’d been running from following my tracks, and I was one of the few white people who could put in a full day’s walk with the Masai and still be sane at the end of the day.

The Masai and many of the other ethnic groups in Kenya have a great reputation for producing runners, but how did they react to you, seeing you run? I think it’s fair to say that for many Kenyan runners, they’re doing it for economic reasons, to better their lives.

NM: They found it generally quite bizarre. If you’re running it was a case of, “What’s the hurry?” In the occasional race I did out there, there was generally a big roar and I thought, “Aren’t these crowds generous in their support?” Then I realized that the roar was because I was the first white man coming through! But up country, if somebody sees you running, they will always say, “What’s wrong? What’s the problem?” And you just say, “I’m running, that’s all.”

How much of the year do you spend in Kenya and in London?

NM: Over the last year I’ve been in Kenya 10 months out of 12. As for training there, I try to train as much as I can, but we don’t have street lights. We have 12 hours of light in the day and then it gets dark, and if your job means that you have to work 10, 11 hours, you cannot run because it gets dark and that’s that. So it’s not that easy, training.

Are you training in the city or the country? And what sort of terrain does that entail?

NM: Most of the time I’m working in [Nairobi], and so I’m training on the outskirts of the city. But we have what I call a home in the bush [in the Masai Mara, near the border with Tanzania], and when I’m there, training is great. You can’t put an iPod on—you have to be very alert because if you get the footprints of the “wrong” animal, you turn around and you go in a different direction!

For those who haven’t been to Kenya, they may think, “This is the land of the runners.” Has being there improved your running?

NM: Most people in Kenya are hopeless at running—that’s the first thing to understand! The people we see are the cream of the cream, the greatest talents in their perfect state of fitness. A bit of altitude, 1800 meters, where I’m based, does slow people down; you notice that when you go there. However, whether [altitude] improves your performance, I’m very doubtful because, it depends on your strengths, but you’ll end up running slower. And if you end up running slower, you’re not going to be relaxed when you’re running at your race speed. I think there’s a lot of give and take, but it would be a great mistake to base the success of the Kenyan and Ethiopian athletes on altitude. There are far bigger factors. If there weren’t, then we would see all the people living down the spine of South America, living at much higher altitude, being the champions. We’d see all the guys from the Himalayas and Tibet being the champions, yet they’re not.

What makes, in your view, the Kenyans and Ethiopians we see such good runners?

NM: Clearly, if you’re going to be a runner, you need the right genes. You need a basic level of fitness through your upbringing and a healthy lifestyle. And you need the opportunities and the incentives to run. I think the Kenyans and the Ethiopians have all of these, but particularly have the incentives to run. They have much, much more incentive to run than the average guy in Britain because one big win and they can set themselves up in business for life; there are very few other opportunities to gain such an advantage. They are disadvantaged in many ways, but when it comes to athletics, they are on a level footing with the rest of us.

Do you have training partners in Kenya?

NM: I have one who is a cook and cleaner in a nearby house, and I like to run with him a bit, although he’s frequently injured. There are others I run with, I say hi to them and run with them, but they are way too slow for me to run with them for any length of time. Occasionally I see Catherine Ndereba or Paul Tergat, who live in the same neighborhood, but invariably we’re running in opposite directions and it’s just “hi,” whew and they go past.

That sounds like some neighborhood, where you have Ndereba and Tergat living there! Are people aware that living there are such runners? Do they say, “We have some of the world’s greatest runners living here?”

NM: Yes, there is huge respect for some of the runners. It’s not just the running but the character of the person. They’ve had champions in the past of whom they’re slightly less proud, but both Ndereba and Tergat have carried themselves wisely in the local community as well. Kenyans are very proud, and they know about those people.

I hadn’t realized until recently that you’re improving at the marathon—you’re running personal bests at age 42, 43. How do you see the reasons for this continued improvement?

NM: 44 coming up to 45, actually. I have no explanation and I don’t understand it. I do think that a healthy lifestyle and keeping fit is a factor. I have never understood why people decline on average by one minute in the marathon for each year after they reach 40. That has not happened to me. Perhaps one explanation is that I didn’t do enough when I was younger; maybe it was a wasted opportunity.

I think you’ve said that as a boy at school you did a lot of the track and field disciplines, then there’s the walking in Kenya and perhaps not burning yourself out too soon. Could they be factors?

NM: Yes, I did a lot of the events when I was at [high] school. I was passionate about athletics. Then there were years, the middle years, when I didn’t do a lot of races. I was teaching in Zimbabwe before I went to Kenya, so not many races, but keeping the running going. Maybe if I’d done more races then, I’d have had enough of the pressure, the races by now. But, as I’ve said, I’ve done quite a bit of running over the years and the burnout doesn’t seem to have happened.

In terms of speedwork, long runs, all that sort of thing, are you a big mileage man, or do you favor intensity? And has the approach changed as you’ve grown older?

NM: I’ve stuck to more or less the same very simple training program I had when a teenager: three interval sessions a week—a short one, hills and a long interval session. I do find I can handle big mileage more easily than when I was younger and getting injured. I can do 150 kilometers a week now, if I have the time. I try to keep the training quite intense—quality rather than quantity is what works for me. I have noticed the Kenyans are almost 100 percent every time they run; trying to find a good Kenyan athlete doing an easy run is very hard.

So summarizing your approach, 44 going on 45, it seems to be a philosophy of “steady as she goes” and you think that the best is still to come?

NM: Yes. In my late 30s I thought, that’s it, “I’ll never get another PB and my sons will beat me within a year.” At 44, neither of those factors has come to pass, and what I realize that you just go for it each and every time. I am also fascinated in the marathon of getting together a team, a family combination, it could be father/son, it could be mother/daughter, and I think there should be a recognized world record for that because, if you think about it, isn’t this a great way for families to share this experience, isn’t this a great way for the older people who are in decline to bring up the younger people who are the future and working together? I’ve even contacted the Guinness Book of Records and suggested it should be measured on the slowest of the two, so you don’t have dad or son shooting off while the other one slugs it out. I think the record should depend on the slowest of the two. I think it would be lovely.