Paul Tergat is one of the best runners of all times. The 39-year-old Kenyan celebrated his biggest success when he became the first to run the marathon in under 2:05 hours (2:04:55) in Berlin in 2003. He won five cross country world championship titles in a row, twice finished second at the Olympics in the 10,000 meter, and set world records on the track as well as on the road. He lives near Nairobi with his wife Monica and his four children, where he already has a growing reputation as a coach and mentor. Take The Magic Step® recently spoke with Paul in Berlin.

Paul, since 1992 you have been a world class long distance runner. How have you achieved this many years of success and how have you stayed motivated?

Paul Tergat: If you have the passion, if you are straightforward, work hard, are willing to make sacrifices to reach your goals, and you believe in your success, then it’s possible. I have always looked for special challenges in my career—great championships, great rivals and records.

Which of your remarkable achievements was the most valuable one for you?

Paul: This clearly is the marathon world record. To be the first runner with a time sub-2:05 was the highlight of my career. Of course, I also had great successes at cross country runs, and in events on the road as well as on the track, and I broke several world records. This combination is quite unique. And if I take a look at my personal bests in the 5,000 or 3,000 meters—12:49.87 and 7:28.70 minutes—I have to say that these are fabulous times.

Do you think that you have reached your full potential in the marathon with your time of 2:04:55 in Berlin?

Paul: When I ran this fast time, I was confused moments before the finish line at the Brandenburg Gate—I didn’t know exactly where to go. So I lost a few important seconds. I slowed down a little but otherwise it was a perfect run for me, and yes, I reached the maximum for me on that day. After my marathon in London in the springtime of 2003 I knew that I could break the 2:05-barrier. I then exclusively prepared for the Berlin Marathon throughout the summer, and I thought of my “mission world record” every day and nothing else. At the end it all paid off and I realized my dream of a marathon world record.

Your sub-2:05 will always be a historic achievement.

Paul: Yes, I set a new standard and showed that it was possible to run a marathon in under 2:05 hours. The consequence is that now other athletes are running such times. It is possible if you believe in it and work towards your goal. However, I know what training it takes to reach such a time. It is very hard. This is why I think a time of sub-2:06 is a life’s achievement for any top marathon runner.

In the last two years you have participated in fewer races. Why?

Paul: In 2007 I noticed that my body needed a break to recover. In the years before, I had never taken a long break. It’s very tough mentally when you have to focus on one race after the other.

For a while it was said that you were on an army mission since you are a sergeant for the Kenyan air force.

Paul: This is not quite correct. I didn’t want to just sit around during that recovery time so I attended a six-month management course in the army. I am a member of the air force but I don’t fly myself. My oldest son does by the way. He is currently undergoing pilot training in South Africa.

Daddy Tergat prefers to run—for how long will you keep up your running career? 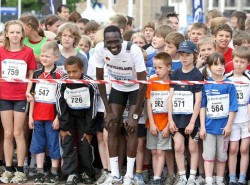 Paul and the children get ready for an exciting run. © www.photorun.net

Paul: I will run another one or two years. During this time I would like to run a prestigious marathon very fast once again. I don’t think of a World Marathon Major here, but of another big marathon. In any case I want to run one in the coming fall.

You will turn 40 in June. Does the master world record held by Andres Espinosa of Mexico play a role in your plans?

Paul: The master world record is not such a big challenge for me. I can break the World Master time. I don’t want to say now what marathon time might still be possible for me.

Do you consider the marathon to be the optimal distance for you at your age?

Paul: Yes, the marathon is clearly the best distance for me to perform at a maximum level.

You have been in Berlin for a few days. What was it like to return to the place of your biggest triumph?

Paul: It was great! I feel a bit like I am at home here. I have good friends in Berlin. In addition to that, races in Germany are always very professionally organized.

This time you had intended to start at the BIG 25 Berlin. What happened?

Paul: On Monday before the race I slipped and fell at training in Ngong. It was raining and the surface was slippery. At first I didn’t feel bad, but the next day I noticed that I had a sore back. My doctor told me not to run because I could develop a serious problem. This is very annoying since I had been looking forward to the BIG 25 Berlin. I have never run in a 25K event in my career and wanted to achieve a good time. I was really in good form and think that a sub-1:14 would have been no problem. I hope that I can compete here next year.

Back to Kenya: You also train other runners in Ngong. How much do you engage in supporting Kenyan athletes?

Paul: I currently train about 30 athletes in Ngong. There are some talents among them who might play an important role in the future. One of them, Victor Kigen, for example won the Belgrade Marathon in April. However, I don’t just train my athletes; I also support them in other areas. For example, I advise them on how to invest their money in order to prepare for life after their running career, and how to deal with the media. I also advise them in legal matters when they sign contracts. I also organize symposia for runners at which I speak about these issues in Eldoret and Nairobi.

Most of the successful road runners have come from Kenya for a long time—is there still more talent?

Paul: There is a lot of talent in Kenya. The pool is getting bigger and bigger, the resources are enormous. The new generation, those athletes who saw us and embraced us as their role models, now want to achieve success for themselves.

It became obvious once more this spring that the Kenyan marathon runners are getting stronger. Is a 2:02 in the marathon really possible? And what time do you think the Ethiopian world record holder Haile Gebrselassie can achieve?

Paul: To run a 2:02 will be very, very hard. If you run the first half in less than 61:30 minutes, in the second half you will not be able to maintain the pace and you risk breaking down. I cannot imagine that in the future a marathon runner will run sub-2:00 as I think we have nearly reached the limit. For Haile it will also be harder to beat his current world record of 2:03:59. If Sammy Wanjiru, Martin Lel, James Kwambai and Duncan Kibet were all able to agree and work together to make the pace, then a time of a little bit over 2:03 would be possible. Even this will be extremely hard. At the London Marathon there are too many stars competing so this will be not possible.

Of the four fellow countrymen you just named, who do you consider to be the strongest?

Paul: I think that this is Sammy Wanjiru because he is an aggressive runner. Martin Lel runs more observantly but is tactically very strong. I was not surprised by Sammy Wanjiru’s run to Olympic victory as I had seen him compete in the 10,000m and the half marathon before—he always determined the pace at the top.

What do you want to do after your running career?

Paul: I can imagine taking over a position in Athletics Kenya, the Kenyan athletics association. I would also like to work as a coach.

How old are your children—will there be a Tergat runner in the second generation? 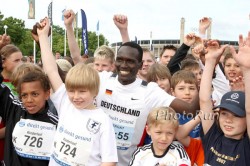 Paul: My children are two, nine, 14 and 19 years old. Although I am an elite athlete, my wife and I do not put any pressure on them. We want to raise them as good citizens in this world. This is why we took them with us on our journeys. The older ones are good runners but not elite runners. Maybe one of my younger sons will become a very good athlete but that would mean a lot of pressure on him. With the name Tergat the expectations would be huge.

Your children are growing up in good circumstances, most of the Kenyan world class runners did not. Does poverty motivate one to succeed in life?

Paul: With the necessary passion, the absolute determination, and the belief in your success it is possible to reach a world-class level—no matter if you are coming from a poor or a wealthy family. Children from rich families have better opportunities and possibilities, however, in Kenya, poverty is the reason for the development of the great number of top runners.