If You Dream It, It Can Happen: Kenenisa Bekele Reflects on His Recent Success 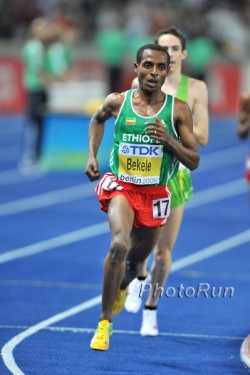 Kenenisa Bekele on the way to his first gold medal in the 10,000m. © www.photorun.net

There were only two athletes in last week’s World Championships who won two individual titles. Ethiopian distance-running superstar, Kenenisa Bekele is one of them. Six days after his victory in the 10,000 meters, he won the 5,000m, which was the first time the distance double-win has been achieved. Bekele’s second victory was a close one as he edged out American Bernard Lagat by only 24-hundreths-of-a-second. Lagat later described Bekele as “One of the greatest athletes of all time,” also calling him “magnificent” and predicting that “it will be a long time before we see another runner like him.”

Take The Magic Step® spoke with 27-year-old Kenenisa Bekele in Berlin after his history making accomplishment.

How do you feel now after winning the double?

Kenenisa Bekele: Achieving this double victory was very important for me. I am very happy and proud to have done it—it was something special because no one had ever done it before at the World Championships. But that 5,000m was a tough race.

Were there team tactics for the Ethiopians in the 10,000m final?

Kenenisa: We didn’t have any team tactics for the final. With a race as fast as that 10,000m final, you can’t do it. If the pace is slow, then you can do it. But when it’s fast it’s every man for himself.

You won two gold medals, but the Ethiopian women runners, who were the favorites, did not fare so well in the distance races.

Kenenisa: I’m proud of my success. It’s not easy running for your country at a big championship, the expectations are so high. When you lose something you’ve grown used to having, you certainly notice it [note: Bekele is referring to the loss of the women’s gold medals to Kenya.] This is a lesson of how important it is to have the best people in the team. It’s difficult if they are missing, because of injury or another reason. Most Ethiopians will be disappointed that we lost these gold medals. 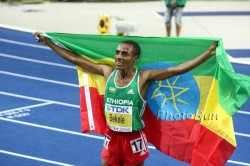 With two gold medals and a new record, Bekele drapes himself in the Ethiopian flag. © www.photorun.net

You have achieved everything in your career—what motivates you?

Kenenisa: I know I’ve achieved a lot already but I still want to improve my personal bests. Also, I just love running; it gives me so much pleasure.

What plans do you have for further races this season?

Kenenisa: I want to win the Golden League jackpot so I will run in Zurich and Brussels, then finish by running at the World Athletics Final in Thessaloniki.

Kenenisa: Yes, I think so, but not this season. Next year that will be my goal because there are no big championships.

Is it true that you coach yourself these days?

Kenenisa: Yes, I’ve been planning and following my own training schedule for the past two years. A coach wouldn’t be much use to me. They would perhaps be able to help with 10 to 15 per cent of my training at most. Sometimes I get help from Woldemeskel Kostre [Ethiopia’s distance coach] when I do track sessions. I enjoy working out my own training schedule and race tactics.

So was the coach satisfied with the athlete’s performance in Berlin?

How did you prepare for the World Championships?

Kenenisa: After I dropped out of my first race of the season, the 1500m in Hengelo, following injury, I sat down and talked this through with my family and said that I was going to have to do more training if I wanted to run better. I started to train twice a day, sometimes running 20, sometimes 10 and sometimes 5 kilometers. I averaged three track sessions a week.

Usain Bolt attracted a lot more attention than you did although you are the only athletes to have won two individual gold medals in Berlin.

Kenenisa: No, it’s okay because Usain achieved something unique. Not only did he win two golds but he also broke two world records. His performances are great for the development of athletics in general.

How fast can you run for the 100 meters?

Kenenisa: My personal best is 11.0 seconds.

If you raced Usain Bolt over 800 meters, who would win?

Kenenisa [smiling]: I would beat Usain over 800 meters every time. I’d be ready to take him on in that kind of race, any day.

Your English is improving all the time—are you taking lessons at home?

Kenenisa: No, I’m not doing any English course at home at present. But now that I’m speaking English more, I improve.

Do you dream sometimes of winning?

Kenenisa: Yes, I often dream of winning a race.

Do you ever dream of running marathons? When are you going to run your first one?

Kenenisa: No, I’ve not dreamed of running marathons so far. Right now I can’t say when I’ll run my first one.