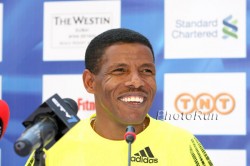 Haile Gebrselassie stands alongside Finland’s Paavo Nurmi, the Czech Emil Zatopek and possibly his fellow Ethiopian Kenenisa Bekele as one of the greatest runners of all time. In his unparalleled career, the 36-year-old already has set 20 world records and seven unofficial world bests. Gebrselassie has twice won Olympic titles at 10,000m—and has been world champion four times at the same distance. In the marathon, he became the first athlete ever to run under 2:04, accomplishing that in Berlin in 2008. His time of 2:03:59 remains the world record for the 42.195K distance. Take The Magic Step® spoke with Haile when he was in Dubai to run the marathon in January.

You’ve achieved such success and recognition in your running. Is there something less obvious that running brings to you?

Haile Gebrselassie: Alongside my sports career I have created various businesses in Ethiopia. That can also bring with it a lot of stress. Even if I run for just 30 minutes, afterwards everything feels fine again. Running can be a big mental boost, it’s as if your brain has had a thorough spring clean. I feel better after running and that means I can also work better. 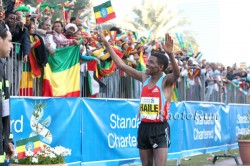 At the Dubai Marathon event, you made a big point of encouraging people to give running a try.

Haile: Yes, I encourage 30 to 40 minutes of jogging a day. That is important. Many people ask me, “Why should I start running?” I tell them, it doesn’t cost much to run but you get a lot back in return. You’ll see the difference in one year. Our world today has many problems—stress, changing lifestyles, climate change, and financial difficulties. I am firmly convinced that running can be a big help in coping with such problems. I could have fallen victim to those kinds of problems but I made up my mind to run and today feel fit and healthy.

Are there ever times when you say to yourself, “I don’t really want to train today?”

Haile: No, never. I can only encourage everyone to start running—no matter how fast or slow or for how long they run. If more and more people began running, they would motivate others to do the same. If anyone wants to run a marathon a year from now, they should start training tomorrow and live healthily.

Who inspired you to start running?

How do you find the motivation for continued hard training after so much success?

Haile: I always want to improve; it’s as simple as that. If there was no longer the chance of running faster, it would be very hard to train. I always study what I have done before my last world record and think of what I could do differently in preparation—for example, including more speedwork or endurance training. Before the marathon in Dubai I knew it could get warm. So I trained in warmer conditions. 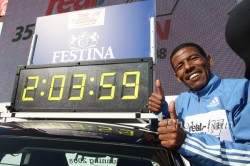 What more could you achieve in the marathon?

Haile: I am sure I could run 2:03:30 for the marathon, though everything must be perfect to do that. Perhaps I might be able to run 2:03:00 even, but that’s tough to say. The 2008 Dubai Marathon was just such a day and I’m still angry with myself at missing the record because we went off too fast in the first half of the race. For me, the two best marathon courses are Berlin and Dubai. They are where you can run your own race. Many people say to me, I only chase records—what’s wrong with that? That’s what I want to do! In Berlin last year they brought Duncan Kibet into the race, the second fastest marathon runner of all time. I said, “Yes, let him run.” It made me concentrate even more.

Do you still have a victorious Olympic Marathon in London 2012 as your goal?

Haile: Yes, I want to run the marathon at the Olympic Games in London 2012. Of course, the competition gets stronger every year. That’s why I make sure I stay in shape and adopt a conservative approach so I can be at peak fitness for 2012. To achieve that goal, I won’t run more than two marathons a year. Some athletes have particular goals, where and when they will retire. I believe, the moment when you have set a firm date like that, you can regard yourself as having more or less retired.

What are your five favorite races?

Haile: The Berlin Marathon is one of them, of course, because I’ve broken the world record for the distance there and won the last four races in succession. Berlin is a fantastic city. The Dubai Marathon is not far from my home and where I train. The journey is no problem, the way they look after you is fantastic and I’m amazed that the organizers are able to create a top-class course time and again with all the construction work that is going on there. The London Marathon is a very good, long established race and I like running there. I hope I can do something special in London in 2012 at the Olympics. I must include in my Top Five list the Great Ethiopian Run. The race in the land of my birth means a lot to me. The Fukuoka Marathon has also got to be included. I won the race in 2006 and loved the atmosphere there. I would love to go back there.

What do you see in the future for the World Marathon Record?

Haile: I truly believe that one day someone will run under two hours. It won’t happen in the next 20 to 30 years but it will be in our lifetimes.