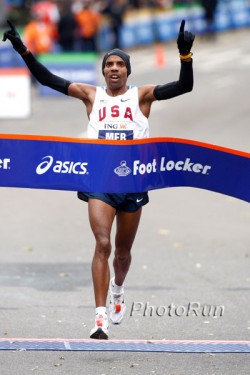 Meb Keflezighi returns to the New York City Marathon this year to see if he can repeat his 2009 victory. © www.photorun.net

Never say never when you are talking about Meb Keflezighi. After a gutsy 8th place finish at the 2008 U.S. Olympic Marathon Trials, despite a broken hip, 35-year-old Meb Keflezighi of Mammoth Lakes, California thought his running career was over. But instead of giving up, Meb, the silver medalist in the 2004 Olympic marathon, persevered. He slowly worked himself back into shape and began an impressive comeback. At the 2009 U.S. Cross Country Championships, Meb finished first and in last year’s ING New York City Marathon, a race with one of the most competitive fields ever assembled in the event’s long history, Meb prevailed and became the first American to win the race since 1982.

Meb recently founded the MEB Foundation, which will focus on promoting health, fitness, and education in the United States and in his native country of Eritrea. Take The Magic Step® caught up with Meb as he was beginning his taper before he returns to New York to defend his title.

As a father of three and a professional athlete, how do you balance your family time with your training time?

Meb Keflezighi: I spend as much time as I can with them. For example, today I went on a 16-mile run and after that, I did some interviews and worked on my training logs, but other than that, I’ve been spending my time with my family—having lunch with them and things like that. It’s always fun to come home and spend some time together. If you have a regular job from 8 to 5, you usually only see your kids at breakfast and/or dinner. So I cherish the time I have with my family.

You still have some big races ahead of you. But what do you see yourself doing later in life? A lot of elite runners become motivational speakers or coaches. Do you enjoy speaking in front of groups? 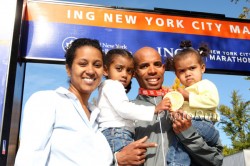 Meb: You hit it right on the spot. I love speaking in front of people and motivating people to get the best out of themselves. When I sign autographs, which is always an honor to sign an autograph or say hello, I always say, “Run to win.” It doesn’t necessarily mean coming in first place; it means giving it the best that you are capable of doing as an individual. I love giving that advice to people. They might be looking down on a day that is cloudy, but I tell them, “Hey, this will be over. Let’s get ready for the next day.” I say this to kind of spark a little bit of light into them. That’s what I hope to do with the MEB Foundation: to inspire youth, young people, to live a healthy lifestyle as well as focus on the education, because education is always key to life. Being fit and living strong are important as well. So that’s what I want to do. Another corner to that might be advising and coaching. In my book, “Run to Overcome,” I’ve said that life is not always about great things. You have to fall and you have to pick yourself back up. And once you do that, you will always come back stronger, no matter what your dream is, whether it’s to break five hours or six hours in the marathon or to break two-and-a-half hours for the half marathon. So I try to motivate people to put their best foot forward and get the best out of themselves.

Assuming you were in charge of the United States Track and Field (USATF) for a day, what changes, if any, would you implement with respect to distance running?

Meb: The Kenyans and Ethiopians have done it right, especially when they are getting ready for big races like the Olympic Games or the World Championships. I think it’s important to select those people for the team fairly and then have them train together, especially the distance runners. In order for them to succeed, they have to have a positive environment. They need to have someone there, giving them fluids at mile 26. If I had to change anything, I would say, “Let’s see where the talent is. How young can we go?” And then develop them to be potential medalists in the Olympics and the World Championships.

There have been many Meb sightings out there and most of them involve you running alone. Do you train primarily alone or with a group? 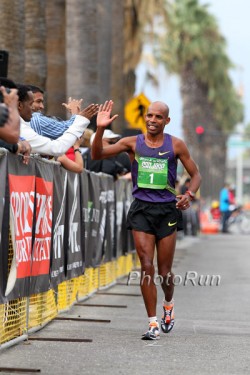 Meb: I love training with a group, but if people see me alone, it’s because most of the people I train with are at work. I love running with people. I did today. I run a lot with the Mammoth Track Club. I met with the team at 8:30. I love having the company. Two days ago, I ran alone, because I was training by myself, doing 1K repeats. I ran those by myself and cooled down by myself. And that’s not fun. You got to at least have someone to chitchat with. Luckily, I have my new Sony Walkman that keeps music in my ear and motivates me. In San Diego, I usually try to train with people, but there isn’t a training group there, so that’s why I am by myself. I usually have somebody with me on the bike helping me out, especially on my hard days. If people see me alone in Penasquitos Canyon, it’s usually because it’s kind of rough for the bike rider to ride next to me. But at Miramar Lake and Mission Bay Park I always have people like my fans or friends helping me out on the long run or the tempos.

Speaking of long runs, what is your opinion on over-distance training? Do you ever run longer than 25 miles when preparing for a marathon?

Meb: Most definitely. For this year’s New York City Marathon, I’ve done up to 28 miles. I’ve done 25, 26, 27, and 28-mile runs. I believe that preparation is the key to success. I believe it was Juma Ikangaa who said, “The will to win is nothing without the will to prepare.” I really believe that. I emphasize it with students in my foundation. If you are going to pass a test, you cannot skip classes; you cannot skip homework or class exercises. If you put the work in, you should succeed. I think the same thing goes with the marathon, whether it’s a run over 26 miles or a race pace for 12 miles or intervals. If you do all that work, you might not hit a home run or get an A++, but you should definitely have a solid performance. I believe preparation is the key to success.

In other interviews you mentioned you were trying to run 150 miles a week but couldn’t due to a hamstring issue, and you settled for 120 miles. For this New York City Marathon build, was 120 miles the highest mileage you achieved?

Meb: I did 120 several weeks back to back. Coach Larsen and I have talked about how my body can react to 150. I think I could do it if I didn’t do intervals, tempo runs and two long runs in the same week. The whole point of this training is to get to the starting line healthy and to have gotten in some good quality workouts. We emphasize quality instead of quantity. We have a long enough season. Just like I’ve done 27 or 28 miles in a run, I’d like to do 140 miles a week. The most I’ve done is 136 at altitude. That’s very comparable to 150 at sea level. You are riding a fine line. I just want to get to the starting line healthy and be very competitive.

Do you do a traditional three-week taper before a marathon?

Meb: Somewhat. Yes. I did a 16-miler today [30 October] and my wife was surprised. She asked me when I was going to start backing off. [He laughs.] I told her I was tapering from 20 to 16. But that was my last long run. Now instead of doing 10 or 15-mile tempos, I’ll start doing 4 to 6-mile tempos. It’s time to let the body recover and see what happens in New York.

What is your fondest memory in a race?

Meb: It’s a toss up of winning the silver medal in the Olympics or New York City. It was a great honor to see the American flag go up on the medal podium in Athens. As far as representing my country, that was huge. But also for me, personally, New York was really special, because I finished ninth in 2002 with 2:12:35. Going into that race, I thought I could pull off a win. But then I got second place and third place and food poisoning. There were so many factors, but I never gave up on my dream. In 2008 at the U.S. Olympic Trials in New York I fractured my pelvis. I couldn’t even walk. I was crawling. I was like a 10-month-old baby. I was on my knees and hands. I kind of almost lost sight of my dream, but I just prayed hard. My wife and I talked about contemplating retirement or not. But I believed my God-given talent was not realized yet, and so I overcame those things. So to win the New York City Marathon, which is one of the biggest marathons in the world, has been a great satisfaction for my family, myself and U.S. distance running.

You have said before that one of your dreams is to meet President Obama. If you win New York again, do you think you’ll get a chance to visit the White House?

Meb: I admire President Obama. I actually dedicated my 2009 win at the U.S. Cross-Country Championships to him. That was a huge win for me. Our country is going through some bad stuff right now with the economic crisis. It’s similar to my injury. I was devastated and at the bottom of the bottom, but somehow I surrounded myself with good people and got good guidance. With a lot of hard work, I was able to come back and win many races including the Cross-Country Championships and the New York City Marathon. I’d love to meet President Obama, whether or not he is still in office or done with his term. By winning in New York City and with my new foundation, it will hopefully increase my chances. I know that Michelle Obama is passionate about fighting obesity and that goes hand-in-hand with the MEB Foundation. I would love to somehow collaborate with her to defeat obesity in the U.S., which is an epidemic now. I will be able to surround myself with so many good people with this foundation, and will hopefully achieve the things I set out to do, like promoting a healthy lifestyle and keeping fit.