If You Believe in Yourself, You Can Do Anything: Peter Gottwald and His Paralympic Dream 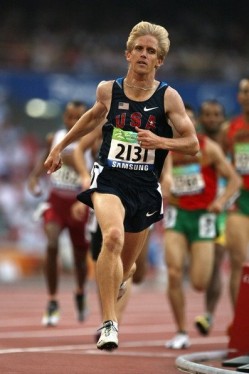 In the 800m final in Beijing, Peter took the early lead. © Courtesy of Peter Gottwald

At the 2008 Beijing Paralympics, 25-year-old Peter Gottwald of West Chester, Pennsylvania stood at the 800-meter starting line in a stadium that was difficult for him to see. Peter was entered in the T13 category—a Paralympic category reserved for athletes who only have 5-10% normal vision. But ever since, as a teenager, he was held back from joining the other athletes in Physical Education classes, Peter had believed in himself and his dream of becoming an Olympic Medalist: in Beijing he finally lived his dream—winning a silver medal.

Peter was born with congenital nystagmus, which is an eye disease that causes rapid involuntary eye movement. Nearly everything is blurry to him. But Peter has never let his impairment hold him back. He’s as determined as they come.

Growing up in San Ramon, California, a suburb of San Francisco, Peter came from a large family of four boys and three girls. Despite his impairment, he made the best of his situation—playing outside with his brothers and sisters, hiking, camping, and surfing. In school, he worked extremely hard and got good grades. But in P.E. class, Peter was forced to sit on the sidelines and watch his friends and classmates have fun playing flag football, soccer, and baseball. Because of his eye disease, his instructor was always worried about Peter getting hurt.

“I couldn’t stand being put on the sidelines like that,” Peter recalls. “I kept asking my teacher if I could do anything other than just stand there.”

One day, Peter couldn’t contain himself any longer, and decided to go for a jog around the playing field. It was on that day that Peter fell in love with running; it was his first step on that long road to the silver medal in Beijing.

That same year, Peter joined his high school track and cross-country teams. He took his running to a new level. Soon the boy with limited vision set the California High School 5-kilometer record (15:08 minutes). But he didn’t get there alone. It took someone very important, someone Peter cites as the biggest help, inspiration, and hero in his life: his father, Schuyler. After seeing Peter take to running, Schuyler decided to do everything he could to help. One night, Peter’s father was listening to an AM radio program where callers could ask the host anything they wanted. Schuyler decided to pick up the phone and talk about his son. Specifically, he asked the host about opportunities in collegiate athletics for legally blind runners. While Schuyler was talking to the host on the air, a blind Paralympic discus thrower, Vince Martin, was listening in all the way from Georgia. Vince took an immediate interest in Peter. After Peter moved to Pennsylvania where he was transferring to West Chester University, he got a call from the discus thrower. Vince made the case for the Paralympics and told Peter what it would take to make it. He told Peter it was possible. He believed in him. 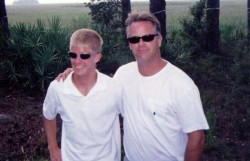 While at West Chester, Peter began training under Coach Vince Touey of Widener University, a small college about a 45-minute drive from Peter’s dorm. Due to Peter’s condition, he cannot drive. But as always, his loving, selfless father was there for him—driving him every day a total of 90 minutes in traffic back and forth to practice at Weidner. When not training with his coach, Peter hit the roads around West Chester. Never a big fan of the track, he decided to run his workouts on the street. He would measure out 400m, 600m, and 800m segments of street and run repeat intervals along those segments.

“People saw me running back and forth on the street and thought I was crazy,” Peter chuckles, recalling those sessions.

Slowly, Peter began to see his times drop. He began setting personal records. In 2004, he qualified for his first U.S. Paralympic team and headed to Athens. He ended up placing 5th in the 800m and 8th in the 1500m.

After realizing that he could compete against the best in the world, Peter began to put in more mileage and step up his workouts. He looks back on those years as the defining ones in his running career. “I definitely put my work in back then, running 50-mile weeks with lots of speed workouts. I trained in the cold. I put on hat and gloves and facemask. I went out in -10-degree temperatures. I ran in the rain and in the hail. I would finish my workouts no matter what. It made me a better person,” he says.

This dedication paid off.

At the 2007 Para Pan American Games, Peter won his first medals—silver in the 5,000m and a bronze in the 1500m. The next year he qualified for the U.S. Paralympic team and was on his way to Beijing. When he arrived, Peter was fit, excited and confident in his dream of winning an Olympic Medal. “I was so excited to be there,” Peter says. “When we went to the Great Wall on a tour, everyone on the team walked up it, but I ran up it I was so pumped!”

When the competition started, things did not go as expected. Peter had qualified in three events, and in his first event, the 5,000m, he didn’t even make it to the final. In his next event, the 1500m, he made it to the final, but didn’t medal. Peter had always been taught never to give up—to believe in himself. So despite his disappointing finishes, he refused to let those races dampen his spirits as he faced his last chance: the 800m race.

Peter remembers that his competitors’ coaches advised their athletes not to worry about him in that final race. They had seen his performances earlier in the games and didn’t expect him to be a medal contender. “The coaches told their athletes, ‘Just let him go, don’t pursue him,'” Peter says. After the starter’s gun went off, Peter bolted to the front. His first lap was 57.28 seconds; he led by 20 meters. “I was like, ‘Where is everybody?'” Peter recalls. Heading into the 600m mark, Peter kept the lead and then with half a lap to go, the pack surged and tried to catch him. Peter looks back on those last 200 meters and only remembers hearing the crowd—all 90,000 fans cheering the runners as they crossed the finish line. To him, it was “one big wall of sound.” As the runners crossed the finish line, only one person managed to catch Peter: Abdelillah Mame of Morocco. But Peter had the silver! Whenever he thinks about that magical moment, he shakes his head: “Seeing my name up there next to a silver medal, wow, it was surreal.”

His dreams of a Paralympic medal had finally come true!

Peter now teaches at West Chester University. He is currently working for his Masters Degree in Education and hopes to reform health education in the United States so other physically challenged students don’t face the obstacles he did.

When asked about how he feels being viewed as a role model for the disabled, Peter looks away and kicks at rocks underneath his chair. He’s a humble person who doesn’t like to talk about himself and so he chooses his words carefully. “In the athletic sense, I definitely think I am. But still, I think everyone is their own person. I hope to inspire people and give them hope—to tell them that you can do great things if you have disabilities. You can go to college. You can graduate at the top of your class. You can make it work.”

Always looking forward to the next challenge, Peter has high hopes for another medal in London in 2012. True to his personality, he will do everything he can to make it happen—to get in and compete against the best the world has to offer.