How Charity, Courage And A Good Samaritan Met at the Boston Marathon 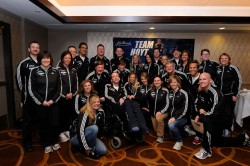 Before any marathon it’s impossible to predict what help a courageous runner might need to get to the finish line. And sometimes it can come from the most surprising directions. Like this year’s Boston Marathon, where Team Hoyt, the legendary father-and-son, runner-and-wheelchair duo, needed—and found—a Good Samaritan on the 26.2-mile road from Hopkinton.

At 15 miles, 70-year-old Dick Hoyt was hobbling in pain from a hamstring pull and he and son Rick were struggling in a race like never before in their 34 years as a team. Then they caught up with Dale Radford, a runner from St. Louis who was also having a tough day and was reduced to a walk. As fate would have it, Dale just happens to be a trainer and massage expert who works with senior athletes—and he cheerfully volunteered to help. Along the next 11 miles, encouraged by sympathetic crowds, this “Samaritan” performed very public “emergency medicine” on Dick’s constantly-tightening hamstring, working his magic until all three were able to cross the finish line in Boston together. 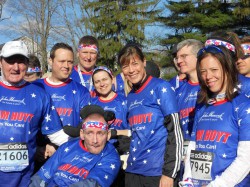 The runners of the Hoyt Foundation at the starting line a few hours before the Boston Marathon. © Courtesy of Team Hoyt/Todd Civin

Fittingly, they were supported on most of that difficult journey by two of the 22 charity runners of the Hoyt Foundation who came to Boston from all over America—and raised a record $125,000 between them for causes that include Boston’s Children’s Hospital, Easter Seals of Massachusetts, and local camps for the disabled. All of these amazing men and women were inspired and brought together by the past heroics of Dick and Rick.

Many of the Hoyt Foundation runners were running their first 26.2-mile marathon; most were meeting for the first time, although they’d been cyber-connected through months of intensive training by e-mails, phone calls, advice, and encouragement from their coach and trainer, Uta.

Team director Doug Gilliland, a 48-year-old attorney from San Diego, told Take The Magic Step® how he used an essay contest to select the men and women who would wear the Team Hoyt vests and the coveted numbers issued sparingly to charity runners by the Boston Athletic Association.

“We had so many applications, I asked them all to write a one-page essay on why they wanted to run with this team,” he said. “The winners’ answers were so inspirational it made it easy to pick.” 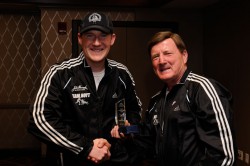 Each runner selected for the Hoyt Foundation pledges to raise at least $4,500.
But this year most set themselves much loftier goals. One New York runner organized a disco night that raised $4000. A Massachusetts runner filled a club with a band night. There were wine tastings, garage sales, and poker nights. Brian Dillon, 36, a portfolio manager from Washington State, raised an amazing $13,259, dedicating his first Boston to the memory of his daughter Abigail Joy, who died at six days old in 2005. 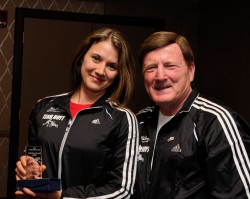 “People knew my story and it became a very easy ‘ask’ for me,” he said. Laura Monroe, a 28-year-old gym owner from Binghamton, New York, brought in $11,391, including $6000 from a Casino Night she organized and another $1300 from a power lift competition. She lifted a total of 609 pounds—with every pound counting for a dollar-donation. And when they all finally met up for a pasta dinner on the eve of the marathon—to be given an inspirational send-off by Uta—they learned they’d collectively raised $125,000 … and broken the Hoyt Foundation charity record by a staggering $65,000. All this while training through an often-challenging winter to run the Boston Marathon.

This night at the Sheraton Hotel many got to meet for the first time the catalyst for all their heartwarming efforts: the celebrated Team Hoyt. Rick was born with cerebral palsy; Dick is the dedicated dad and runner who’s pushed him in his wheelchair across countless marathon finish lines and, most incredibly, completed the Ironman Triathlon several times since they became a beloved team in 1977. Together, they’ve raised millions of dollars for charity, and their motto—“Yes You Can”—has inspired thousands of people who’ve witnessed their grit and determination. Their marathon PR is an astonishing 2:40—at the time a scant 30 minutes off the world record by a runner who only had to push himself. 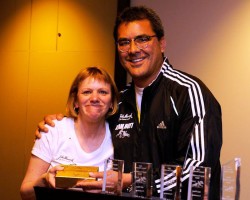 But Dick is past his 70th birthday now and Rick is approaching his 50th. And at the Team Hoyt pasta dinner on the eve of the Marathon runners shook their heads in disbelief as Dick revealed that he was planning to run Boston on a “long” training run of 3.1 miles! He had knee surgery to repair a torn meniscus on January 27. Four weeks later he ignored doctors’ warnings, ran a 5K race—and pulled a hamstring. He completed his Boston preparation “water running” in a swimming pool. On Marathon day, April 18, the pain hit him early, at three miles. “I had massage sticks with me and I kept pulling over to the side to try to stretch out my hamstring,” Dick told this Take The Magic Step writer. Finally, with the pain intensifying at 15 miles the Hoyts found their Good Samaritan. “A runner who was stopped on the road and apparently done for the day, saw me struggling and told us, ‘I’d be happy to help you,’” explained Dick. “It turned out he was a trainer and massage expert and I lay down on the road and he got his elbow in there and stretched out the hamstring real good. I was able to run about four more miles before it got bad again.” Dick’s courage was infectious: by the time he was back on his feet, Dale Radford had also found the strength to go on.

Way behind Dick, Rick, and Dale was Doug Gilliland, running his seventh Boston. Charity runners start in a wave near the back of the 28,000-strong field, and he’d crossed the starting line 78 minutes after them. “I’ve always wanted to run with the Hoyts but never managed to catch them,” he said. “I was coming into the Newton Hills and someone in the crowd saw my Team Hoyt shirt and shouted, ‘Dick and Rick are just ahead of you.’ I charged those hills. I heard the crowd yelling for them before I caught them up halfway up Heartbreak Hill.” To his dismay, “Dick was in a lot of pain.” 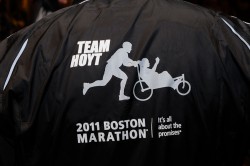 Unknowingly, Doug was about to become a witness to Team Hoyt’s most courageous performance—and the love affair the knowledgeable Boston spectators have with their favorite duo. “The crowd sensed what they were going through and the noise was incredible as they encouraged Dick and Rick to keep going,” he said. “A runner who passed us turned back in tears to shout to them, ‘thanks—you keep me going.’ Other passing runners patted Dick on the back and urged him on. Every few miles, when the pain got too much, Dale would lay Dick on his back and stretch him out. And the crowds would just cheer and cheer till he was back on his feet again.”

But there was still more drama to come. Just after the mile-20 marker, Dick groaned, “I think I need to stop again.” Dale told him, “Wait for the next patch of grass so you can lie down.” Said Doug, “Well, the next patch of grass happened to be outside a cemetery. Dick laughed out loud when he saw it, but the crowd fell silent as he hobbled over to the grass, went down on his knees—then rolled over, face down. They obviously thought Dick might be going down for the last time—in a cemetery! When Dale had finished working on him and he finally got up, smiling, and started running again, there was a roar of laughter—and deafening cheers.”

All the while, Rick was suffering too. “It’s the longest time he’s ever been in the chair,” said Dick. “He started sliding in the chair and having back problems. I’d had to stop several times to adjust him.” Rick’s long-time caregiver and friend Mike Adams, 58, told Take The Magic Step, “I met him in the recovery tent and he was tired and dehydrated and overdue for his medications.” It was 12 long hours since Mike, a former hospital respiratory therapist, had given Rick his 4:30 a.m. wakeup on Marathon morning. 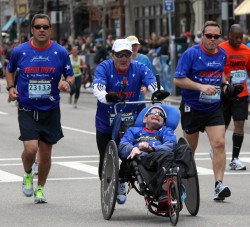 Uta was there to greet them as Dick and Rick crossed the finish line in 7:03 accompanied by Doug and another Hoyt Foundation runner, Bryan Lyons, a dentist from Methuen, Mass—and a happy Dale Radford. The Good Samaritan who’d feared he wasn’t going to finish was carried along by Team Hoyt. “He finished the marathon along with us, so in the end we helped each other,” said Dick. He acknowledged, “It was our longest ever marathon and very painful. But the crowds carried us home. They were unbelievable … the loudest noise ever.” Doug smiled and admitted, “It took a while after we’d finished for my ears to adjust.”

A year ago, Dick Hoyt hinted that 2012 might be the last Boston Marathon for him and Rick. But a week after 2011, he told Take The Magic Step, “I can’t say next year will be the last one. Our goal was to finish this year—and have a really good one next year.” 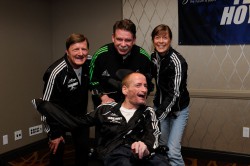 For the charity runners of the Hoyt Foundation, the experience is much more than just the thrill of running Boston, says Randy Rechs, a father of three from San Diego, who clipped almost 24 minutes off his best time to finish in 3:48:54. “It’s my second year with the Hoyt Foundation—and it’s changed my life,” he told Take The Magic Step movingly. “Getting to know Dick and Rick and their amazing story has made me a better father, better husband and better friend. When you see this 70-year-old man pushing his nearly-50-year-old son, it makes you think you can move mountains. It’s hard to explain … but it’s magic.”

And as a Post Script: Weeks later, the runners of the Hoyt Foundation Marathon Team, most of them who had never met before, continue to email like good and old friends. An illustration of how the Hoyts touch so many, in so many different ways. 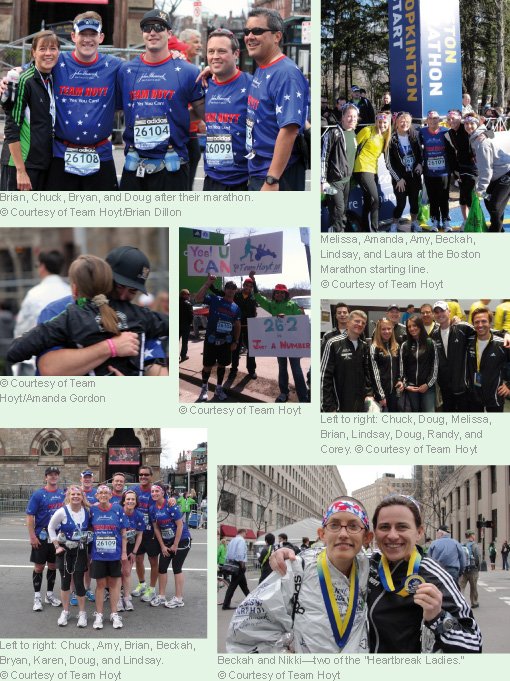