When I walked into the bedroom, I noticed a crack in the wall. “Oh no!” I thought in alarm, “The house is collapsing from the weight of all those race T-shirts!” I always knew this day would come. After years of collecting T-shirts from running or from volunteering at races, a critical mass had been reached; damage had occurred to our house infrastructure. 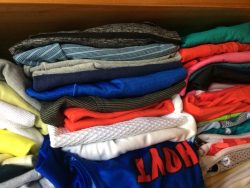 I opened a cabinet door and perused part of my T-shirt collection. I tried to pull out one of my favorites, but the cabinet was so crammed that I was unable to pry the T-shirt loose. Perhaps I had a tad too many race souvenirs after all. The good news, though, was that I was getting a good upper body workout as I struggled to extricate the T-shirt from the tangle.

Focusing my attention again on the wall crack, I realized I either would have to continuously repair cracks as they developed or get rid of T-shirts. Could I part with clothing that held fond memories of favorite races? However, could I handle constant home repair? I am not a homeowner; I own a house. Those are two different things. A homeowner will fix something that is not broken, often breaking things in the process. For example, a homeowner friend of mine once decided to save on his fuel oil bill by rerouting his hot water pipes through the inside of his fireplace. The first time he lit a fire, the heat turned the water in the pipes into steam. The steam softened the solder in the pipe joints, causing the pipes to collapse simultaneously throughout his house.

On the other hand, that will never happen to me. I once had a small drip under my bathroom sink. Naturally I placed a bucket under the sink. Within 2 months the hard water formed a calcium seal that permanently fixed the leak.

Thus, since I am not a homeowner, the decision was easy; I had to get rid of T-shirts. However, what goes and what stays? Thumbs up or thumbs down? I felt less like Roger Ebert and more like Nero at the Roman Colosseum: “Spare that one, it amuses me.”

Well then, what did I discard? Apparently not enough. After the first pass, I realized I still had far too many T-shirts. The cabinet sagged from the weight of the remaining clothing. It was time to be Ming the Merciless.

Out went the Reindeer Ramble T-shirt with the Dick’s Sports logo. (No, not the national chain.) Out went several Duchess County Classic T-shirts. Out went any that had shrunk or had faded and all sizes small and medium. Out went all T-shirts that had so many advertisements that I looked like a walking billboard. Still not enough. I then decided to get rid of white T-shirts, which meant discarding most of the recent T-shirts. That made a sizeable dent. I fell into a dumping frenzy, which I admit was quite liberating! With a maniacal look on my face, I cast more and more T-shirts into an ever-increasing pile on the floor. I felt like a French Revolution peasant sacking the home of an aristocrat. I became caught up in how tall I could make the pile with the same intensity as Richard Dreyfuss had in the movie Close Encounters of the Third Kind when he built Devils Tower out of mashed potatoes I suddenly thought of a news article I had read recently. A home consultant to the rich and famous instructed people such as Matt Lauer of the Today Show to throw out most of their possessions. Why? To get rid of the clutter in their daily lives! I now understood the thrill of minimalism.

End result: 130 T-shirts times 1/2 pound per item equals 65 pounds. Now, what to do with the weighty castaways? My friend Jean Sylvester said she knew someone who could make a quilt from my T-shirts. However, the added weight of the quilts would only accelerate the collapse of the house. Instead, I gave the lot to Goodwill Industries. One of the benefits of the purge was I did not have to buy a larger house. Now if I can only get that crack in the wall to fill itself. Maybe I will place a bucket under it. 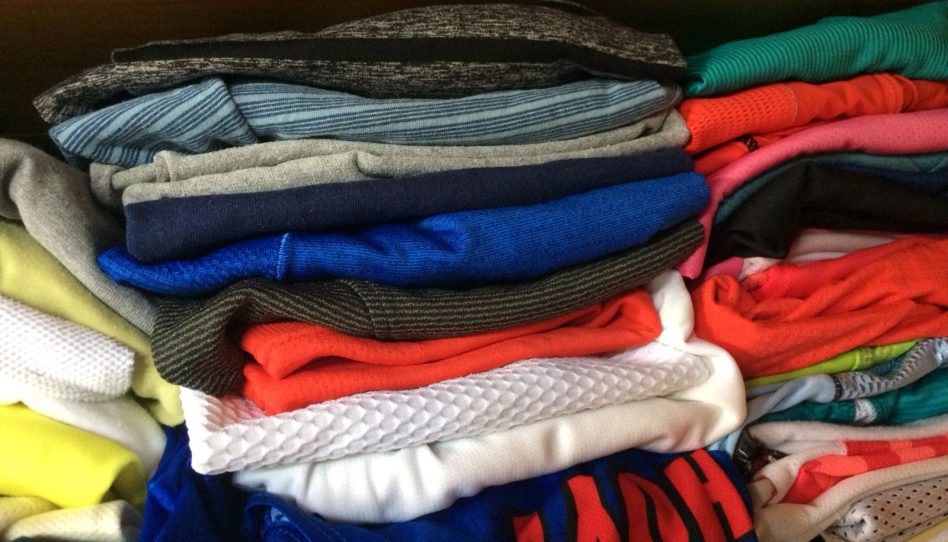