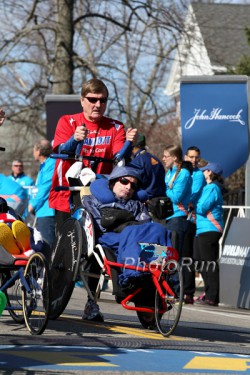 Dick and Rick at the Starting Line of their 32nd consecutive Boston Marathon. © www.PhotoRun.net

It was a fleeting moment in the 118th Boston Marathon, but it somehow defined the heart of Team Hoyt and explained the unique bond of love linking Dick and Rick Hoyt, the father-and-son wheelchair racers, and their fans in New England.

Twenty-four miles into Dick Hoyt’s final Boston run, three figures among the huge roaring crowd on the sidelines catch his eye. Dick, 73, stops, pushes son Rick over to the course barriers and speaks into a policewoman’s ear. Amazingly, in spite of the unprecedented security, she unlocks a barrier and ushers onto the course a man and woman. They are pushing a teenage boy in a wheelchair.

Rick, now 52, was born with cerebral palsy, unable to walk or talk. And what Dick had spotted in the frenzy of the marathon crowd was a boy who reminded him of the young Rick. Sure enough, he tells Take The Magic Step, “it turned out he has cerebral palsy and is very similar to Rick.” The race briefly forgotten, Dick introduced Rick and engaged the parents, assured them they would never be alone—and ended up persuading the non-runner couple to push their son in a shorter race with him and Rick in May.

Then with the crowd noise rising, he and Rick ran on, surrounded by a phalanx of more than 30 Team Hoyt charity runners and their co-trainer Uta to an emotional and ear-splitting finish on Boylston Street. 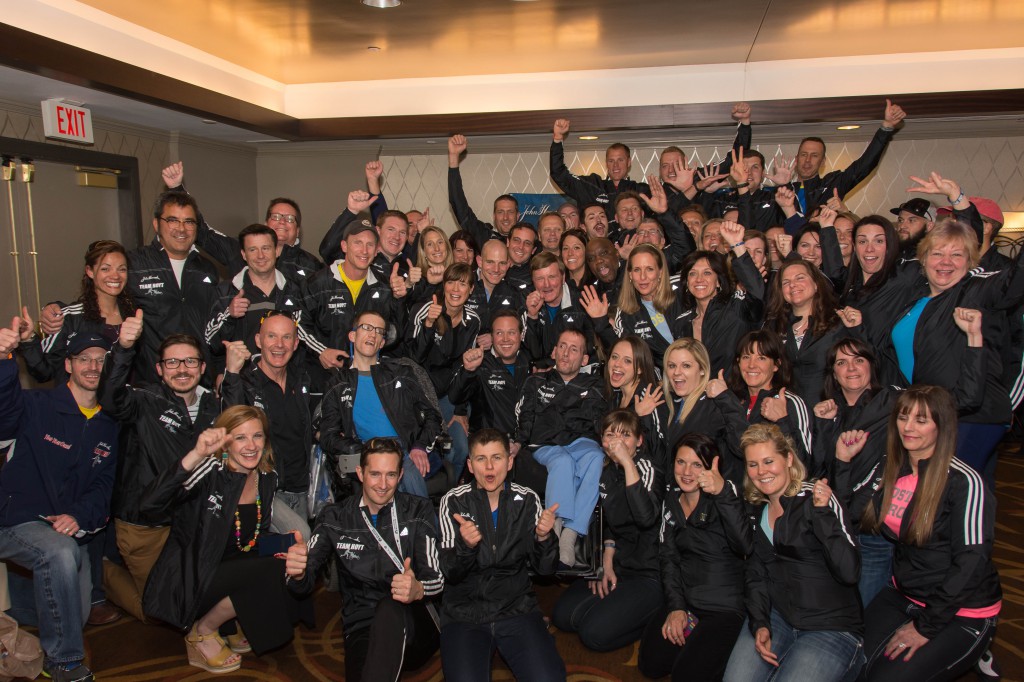 It was the Hoyts’ 32nd Boston and their last as a team. Dick has finally had to acknowledge the passing years and the back problems that have slowed him down. This was his final marathon.

What a difference 32 years has made. Their first couple of Boston Marathons they had to run as unofficial “bandits” because wheelchair runners were pretty much unheard of and their entry was refused. By 2013 they were so beloved that an inspiring bronze statue of them in familiar running pose was unveiled near the start in Hopkinton.

And consider what they achieved in between. They recorded an astonishing 2:40:47 finish in the 1992 Marine Corps Marathon… finished several IRONMAN triathlons with a best time of 13:43:37… completed more than 1100 events together… and paved the way for no fewer than ten wheelchair teams to run Boston officially in 2014. And along the way they captured hearts around the world. 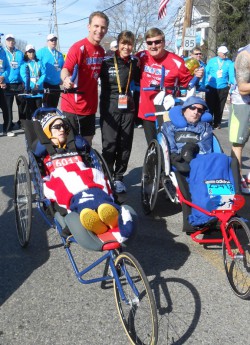 Dick, Rick, and Uta together with Ted Painter and Nick Draper at the Starting Line. Ted and Nick finished the marathon in an astonishing time of 3:13:15. © Jay Foley

Dick’s “retirement” was supposed to have happened last year. But when he and Rick were halted a mile from the finish by the bombings they decided to run the 2014 version to honor the victims. And it appeared as if most of the million people who lined the course seemed to know it was the last time they would see father and son together in this race. Everywhere along the course cheers grew to a crescendo as they approached. There were tears and high-fives and hugs and kisses from the girls at Wellesley College, and cries of “Please come back next year.”

Before the start, the Team Hoyt runners—53 strong this year—had already raised more than $210,000 for the charities the Hoyt Foundation supports, and now they were planning a grand finale. At a team meeting, the runners from around the country made a pact to set aside personal marathon goals and, as a tribute, try to finish with Rick and Dick. The wheelchair duo started a couple of hours before the team, but one by one and in little groups, they caught up—and stayed. Doug Smith, from Louisville, Kentucky, finally made contact after 24 miles, with four other team members. “I’d hit the wall and was cramping, but the atmosphere around the wheelchair was electrifying,” he tells Take The Magic Step. “I’d been listening to music, but the crowd noise around Dick and Rick was so loud I couldn’t hear a thing.” By then more than 30 team members had caught the Hoyts and the group cheered as they were joined by Uta, wearing the Team Hoyt uniform. “Uta was unbelievable,” says Dick. “Just when I thought the noise couldn’t get any louder her enthusiasm and hugs and high-fives got the crowds going crazy.” 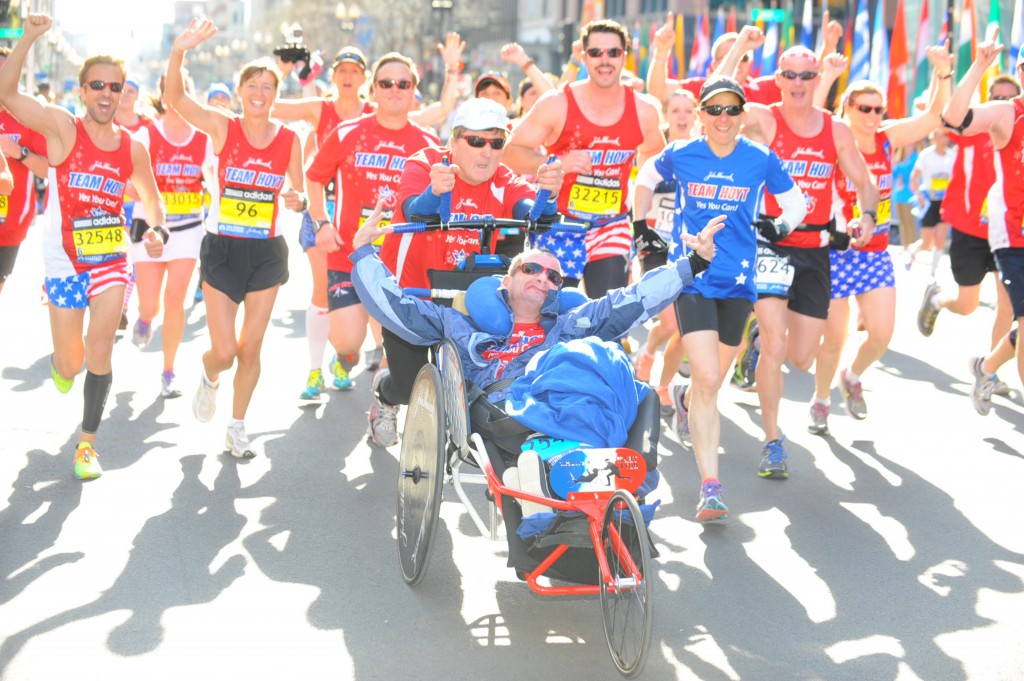 Dick and Rick on their way to the Finish Line together with their fellow Hoyt Foundation runners. © MarathonFoto

The group—many in tears—crossed the line in 7:37:33. “It was a joy to finish with them all and see the love for Dick and Rick expressed in the most emotional Boston finish I can remember,” says Uta.

“It was such a beautiful thing that the team wanted to finish with us,” adds Dick. “And there was so much love from the crowds. They knew Rick and I were out there to say goodbye as a team.” 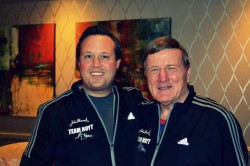 Dick Hoyt together with Bryan Lyons at the team

But though Dick has run his last Boston, happily, Team Hoyt will live on. It will surprise no one who witnessed Rick’s joy during that last emotional jog down Boylston Street that he is not ready to quit. “He had a smile on his face and both arms were raised triumphantly in the air—and it’s a long time since he’s been able to do that,” says his proud father.

So while Dick will continue pushing the chair in shorter races around New England, long time Team Hoyt member Bryan Lyons—a 44-year-old dentist from Methuen, Massachusetts, and a friend of Rick’s—has been chosen to take his place at the wheelchair’s helm for next year’s 119th Boston Marathon.