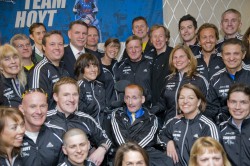 Dick and Rick Hoyt with the Hoyt Foundation runners at their pasta party. © Courtesy of Team Hoyt

A Boston Marathon marked by unusually high temperatures provided a memorable stage for the Hoyt Foundation Team, the dedicated runners who support Dick and Rick Hoyt, the legendary father-and-son, runner-and-wheelchair duo who have inspired countless people around the world with their courage. Once again the Hoyts demonstrated how even those faced with adversity can overcome all odds and do the seemingly impossible.

This 116th running of the world’s oldest annual Marathon was special for the Hoyts. Dick, 71, would be pushing Rick in their 30th Boston race. Rick, confined to a wheelchair with cerebral palsy as a result of oxygen deprivation to his brain at birth, had just turned 50. 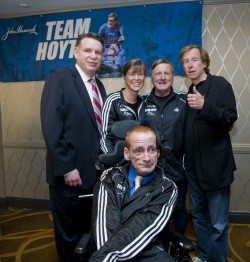 To add to the amazing set of numbers, their long-time sponsor, John Hancock, was celebrating its 150th anniversary. And this year, a record 42 runners from all over North America had come together as the 2012 Team Hoyt to be trained by three-time Boston Marathon winner Uta Pippig to help raise money for the Hoyt Foundation’s charities.

With heat in the high eighties forecast for April 16th, the organizers of the event—the Boston Athletic Association—took the unprecedented step on the eve of the race of advising all registered runners who felt they were unprepared for the conditions to drop out and receive a bib number for 2013. More than 4,000 took advantage of the offer. Yet, in a tribute to their training and determination, 96 percent of the 22,426 runners who started—including every one of the Hoyt Foundation runners who lined up in Hopkinton—completed the 26.2-mile journey into Boston.

For some of the Hoyt Foundation members, the stressful conditions actually contributed to a unique and unforgettable opportunity to accompany Dick and Rick part of the way to Boylston Street—and to witness firsthand the remarkable bond between an amazing father and son. 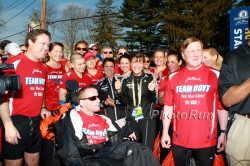 Dick and Rick Hoyt with Uta and the Foundation’s amazing 2012 Boston Marathon Team before the start in Hopkinton. © www.photorun.net

Along the way, the Hoyt Foundation runners raised more than $210,000—a record amount—for causes that include Easter Seals of Massachusetts, Boston Children’s Hospital, and special camp and related programs which serve children with disabilities.

After having mostly recovered from numerous injuries incurred last year, Dick Hoyt was eager to start the race. He had been hoping for a 5:30 finish but it was not to be. By mile 5, he was hobbled by painful blisters developing beneath heels and toes on both feet that would eventually bring him to walking pace. “It was no fun, especially running downhill,” he candidly told Take The Magic Step®.

Another worry was making sure that Rick—riding in a brand new wheelchair—stayed fully hydrated. “We stopped at every water station and I was able to talk to him and make sure he had no problems,” says Dick. 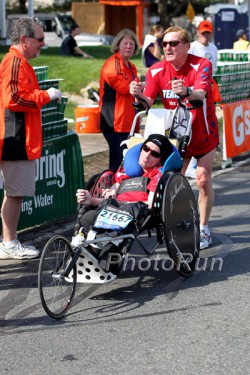 Dick and Rick racing with their new wheelchair. © www.photorun.net

Despite the early problems Dick and Rick faced, they soon found out they were not going to be alone on their journey. Team Hoyt’s Brian Dillon, 37, from Issaqua, Washington, who had started about 90 minutes behind Rick and Dick, was running well—aided by spectators’ offerings of ice, water, and even popsicles—and was on track for a possible 4:30 finish when he caught up with the wheelchair near the 19-mile marker. He discovered his teammate Bryan Lyons, a 42-year-old dentist from Methuen, Massachusetts, had just joined the Hoyts “to walk and provide some moral support.” Brian said, “I thought for a moment and then asked Dick if he wanted us to move along or if he and Rick would like some company on the way into Boston. He said, ‘I think it would be great to finish as a team.’ At that moment, I was determined to see this race through to the end with them.”

In the final miles, more and more Hoyt Foundation members including Kentuckian Doug Smith, 42, and Randy Rechs, a 42-year-old San Diego attorney, gathered around the wheelchair. They were rewarded with a rare glimpse of the courage and companionship shared by the most famous duo in running. Brian admitted, “It was inspiring to see firsthand the continual care and focus that Dick had for his son’s needs and comfort—even at the sacrifice of his own needs. The lively banter of jokes and stories between them as the miles passed brought a smile to my face. Like Dick saying, ‘Hey Rick, remember last year when I had to lie down in that cemetery just after Boston College to stretch out my back?’ Or reminding him playfully of the one race he’d beaten Rick in—when he backed into the finish line and Rick was mad. And Rick would listen to his Dad’s stories and bust out a smile and a laugh.” 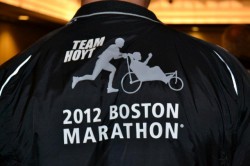 There were other touching moments. Fellow runner and former Boston Patriots footballer Teddy Bruschi, who famously resumed his stellar NFL career after having a stroke, caught up with the wheelchair, bent down to encourage Rick and told them, “You guys are my heroes.” And courage saluted courage when a blind ex-soldier, running with a guide, asked for help to reach out and touch Dick’s shoulder—telling him, “I wouldn’t be out here if it wasn’t for you guys.”

By now Dick was truly suffering from the blisters on his feet. His hopes of running a 5:30 marathon were long gone and he wisely made a decision—like many others this day—to walk it in. Afterwards, he would say gratefully, “It was really nice to have about eight guys from the Team with us, not caring about their own times. And the crowds were fantastic—cheering us louder than I ever remember.” 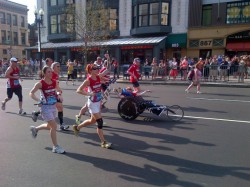 Dick, Rick, and the Team in the home stretch coming down Boylston Street. © Courtesy of Team Hoyt

Brian Dillon says he will never forget those wonderful crowds and their deep-seated affection for hometown idols Dick and Rick. “When spectators saw the Hoyts coming, they would stand up out of respect and encourage them onward,” he remembers. “The closer we got to town, the louder it got—and, as we turned down Boylston Street into the final homestretch, I was able to witness what this father and son meant to each other, to Boston, and to the world. As we picked up speed, Rick threw his arms out as if he were flying. That’s because he was: it was as if Rick was being propelled forward effortlessly at a tremendous speed by his Father’s love. And Rick clearly was lifted up by the cheers of those lucky enough to be there to witness their accomplishment and celebrate it together. What an amazing opportunity it was for me and the other Team members to run stride for stride with the Hoyts as they crossed the Finish Line for the 30th time. It was like watching the history books being written right before my eyes.” It had been 7 hours and 22 minutes since Dick and Rick had rolled out of Hopkinton, and team coach Uta was among the many friends waiting to congratulate them. 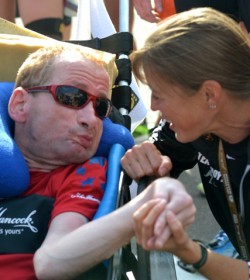 Over and over on this day, Uta heard the finish line buzz with gratitude for the superb, caring work done at the aid stations along the route—and praise for the knowledgeable race spectators from the area. They know true grit when they see it—and they rose to the occasion magnificently, cooling down the runners with more water hoses than ever and encouraging them with messages and yells of support. “Many runners told me, ‘There was so much support out there—we couldn’t have done it without all the wonderful people,’” Uta said. Best of all, there were no major incidents to mar an unforgettable marathon—and runners in the thousands were well enough prepared to be able to defy the elements and finish on a day when that, alone, was an achievement in itself.
—

When Take The Magic Step caught up with Dick Hoyt a few days later, he was mowing the lawn at his home outside Boston and preparing for carpal tunnel surgery on his hand—which he was anxious to assure us hadn’t caused him any pain when he was pushing Rick’s chair. The marathon? “It was tough,” he finally admitted, “but the crowds were unbelievable—my ears will be ringing for a month.” 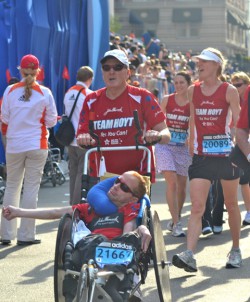 He was especially delighted that Rick’s brand new chair performed as hoped. “The chair we used last year gave him so many back problems that he was almost in tears as we crossed the Finish Line,” he said. “This new chair has a seat so comfortable he didn’t want to get out of it at the end. He was so happy when we finished and he had such a big smile on his face.”

“I was a little bit disappointed in our time, but we came out of this pretty well because we used our heads and didn’t try to break any records.”

“Now we can start training for next year.” 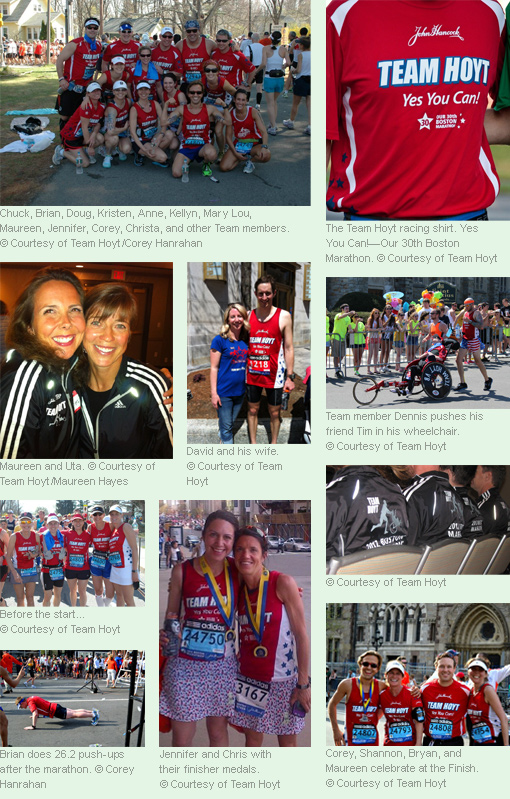