The snowy morning that I drove into Center City, Philadelphia to join the 5:50 a.m. run of the charity group Back on My Feet, the temperatures were well below freezing and I figured I’d be there by myself. But then they came, one after the other appearing out of the swirling snowflakes from all walks of life. Over fifty people left the starting line together, college students, white collar workers, and the formerly homeless group from Back on My Feet. That run was a lesson in life for me. 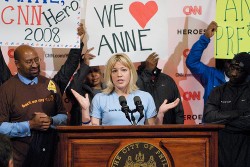 Anne Mahlum was recently chosen as a CNN hero of the year. Here she is with Back on My Feet members and the mayor of Philadelphia. © All photos are courtesy of Back on My Feet

Down on Broad Street, in the middle of Philadelphia, there’s an old dilapidated stone building that dates back to the late 1800s. It towers above the street. Sheets of weathered plywood have been crudely nailed over its doors; its once-resplendent walls are now plastered with enigmatic graffiti. Tree-sized weeds protrude out broken windows. This old building is called the Divine Lorraine Hotel. A long time ago, this building housed hundreds of the city’s homeless. Today, the old hotel serves only one purpose: It’s the meeting spot for a new, thriving charity—a charity that does more than ladle soup and offer a warm blanket; it seeks to build self-esteem and teach life skills through running. Anne Mahlum’s charity, Back on My Feet, started in July of 2007. Anne, a veteran marathoner, used to pass the same homeless people along her daily running route. “Why am running past these guys?” she later recalled. “I’m moving my life forward every day—and these guys are standing in the same spot.”

Spurred into action, she began to establish a rapport with the homeless people that she saw along her run. Her newfound homeless friends were guests staying at the Sunday Breakfast Rescue Mission in Center City. One day, an idea popped into her head: maybe running can really help them? With a background in public relations Anne began leveraging her media contacts. She made a few calls and enlisted volunteers. Then one night, her efforts were broadcast on television.

Caring people were watching—people like a graphic designer who offered to design the Back on My Feet Logo as well as a Web site for free. “After that,” Anne recalls, “people started sending in food and clothes and they donated money too.” (It’s worth mentioning that Back on My Feet receives no public assistance; it is completely funded by private and corporate donations.) Besides money and clothes, people donated services. A lawyer friend took her on as a client pro bono. “It really took off,” Anne says. “It was a grass roots movement completely.” Soon the city’s first homeless running group was formed due to Anne’s perseverance and the generous donations that literally put shoes on the feet of the homeless. 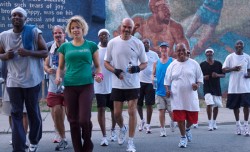 Anne Mahlum literally getting people back on their feet.

Back on My Feet is now partnered with five shelters that house 54 members—members who have collectively logged an astonishing 3000 miles! This is how it works: After undergoing an interest evaluation and health screening, the members are asked to sign a dedication contract and goal sheet. The members are then required to spend a minimum of 30 consistent days living at one of Back on My Feet’s-sanctioned shelters and running a minimum of three times a week. After three to four months of uninterrupted participation in this living/running program, the members are enrolled in job training programs, offered educational scholarships, and given housing assistance.

But it hasn’t always been easy for Anne and her squad of volunteers. There have been countless challenges. “The biggest challenge was building a program while it was happening at the same time,” said Anne. “Figuring out the structure, goals, and what it means to graduate from our program. We also had to figure out how to partner with our shelters. Like if someone gets kicked out of the shelter, all of a sudden they don’t have a place to live, because we don’t physically offer them food or shelter. It puts us in a really hard spot. We have to work to place them somewhere else, because we don’t have a place ourselves.”

Despite these setbacks, there are countless success stories. Anne’s favorite success story involves Joe. Joe tried to get sober five separate times using other programs and it never worked. He joined Back on My Feet in November, 2007 and participated in the program for nine months. He completed all his contract goals and applied for a grant to buy tools in order to get hired as a maintenance worker. (The tools were a prerequisite for hire.) His grant was approved and members of Back on My Feet took him to Sears and bought him the tools. He got the job, moved out of the shelter, and now works part-time for Back on My Feet.

Kenny is another such success story. I got to meet him the morning that I ran with members of the Ridge Avenue shelter. The shelter’s coordinator, Jordan, had told me to be in front of the Divine Lorraine at 5:50 in the morning. When I arrived, a group of African-American men led by a woman in a knit cap jogged over to me. A few of the men wore sweats that said “Back on My Feet.” One man wore blue jeans; another wore shorts. Most of the men had grown long beards.

I went to shake their hands and introduce myself; but they hugged me instead. Hugs are commonplace with Back on My Feet’s runners. As we were greeting one another, a group of 30 young women wearing “Drexel Crew” sweatshirts arrived. After that, a platoon of ROTC cadets sporting buzz cuts appeared from around the old hotel’s corner.

We were a motley crew indeed. 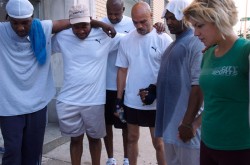 Back on My Feet members pray before their run.

We all put our arms around each other and Jordan led the group in Reinhold Niebuhr’s famous Serenity Prayer—the prayer used by Alcoholics Anonymous and other 12-step programs:

At the conclusion of the prayer, some of the men let out a holler and clapped their hands excitedly. Delivery trucks drove by and honked at us. The men gave them big thumbs ups. Everyone was pumped.

Our run that morning was two miles: a short circuit west of Broad Street. After I started running, a member of Back on My Feet saw me and came up alongside me. It was Kenny. He wore a blue flannel shirt under his official Back on My Feet sweatshirt. While we ran along the quiet, snow-filled streets, he told me about his life—about how he grew up in a broken family and had dropped out of high school in neighboring Montgomery County. “I even played football there,” he proudly reminisced. After he dropped out, he dabbled in “booze” and drugs. He got mixed up with the wrong people and before he knew it, his life had become a wreck. He had no home, no money, and no one who loved him. “I was as good as dead,” he said shaking his head. He then clapped his hands and let out a holler that echoed off the walls of the slumbering city. “But running has redeemed me!”

Halfway through the run, I asked Kenny what he thought about all the disparate groups running that morning—about the Drexel women’s crew team and the short-haired ROTC cadets.

He turned around and looked back. A big smile appeared on his face. “Ain’t this amazing?” he said. “I mean ain’t this really amazing? This is a clash of cultures, man—a real clash! Boom! That’s what it is. I mean how many times do you see folks that looks like me running beside a bunch of 20-year-old college girls at five o’clock in the morning? I mean this is like the Bible, man. Have you ever read the Bible?”

“It’s like the parable about the Good Samaritan. You got all these groups of people that don’t always get together—folks that avoid one another at all costs: the Samaritans and the Israelites, you know. But when you get something good going on—somebody doing something good to people that they usually avoid, when you got everybody running together, you get unity!”

That type of unity, the sense of empowerment brought on by running has given Kenny the confidence to make concrete changes. He now knows how to balance a checkbook and with a smile on his face, he said he can run a sub-7:00-minute mile: the fastest mile clocked at the Ridge Avenue shelter.

We turned right onto Broad Street. That towering, dilapidated shelter, that old symbol of misguided charity, loomed in front of us. With four hundred meters to the finish, Kenny picked up the pace. He wanted to show off his finishing kick.

“Come on. Come on. Hop to it!” he bellowed. Sweat dripped down his face. His breath formed large clouds.

I went with him. We both opened up our stride. Domed streetlamps transmitting amber-colored light shone down on the two of us as we huffed and heaved. At the finish, Kenny edged ahead of me.

“No losers, no losers,” he said patting me on the back.

Behind us, the women’s Drexel crew team finished their run. One of the women had tripped on a barrier in the street. A long line of blood trickled down her leg. She sat down on the steps leading into the boarded-up entrance of the Divine Lorraine Hotel. A member of Back on My Feet saw the blood and ran up to her. He asked her if she was ok. She said she was—a bit embarrassed, that’s all. No worries.

“Let me go get you a bandage—looks like you can use one,” he said. He took off at a dead sprint towards the shelter. Kenny looked at me. “See what I mean? A clash of cultures!” And he slapped his hands together.

Anne Mahlum’s original dream of helping the homeless by teaching them discipline and confidence-building skills through running has come true. If you are ever in the Philadelphia area, drop by the Divine Lorraine Hotel at 5:50 in the morning and go for a run with Back on My Feet. It will be an experience you’ll always cherish.