Every year, the Pan-Mass Challenge raises more than $30 million for cancer research and treatment through the Dana-Farber Cancer Institute’s Jimmy Fund. First held in 1980, the two-day event was  the first fundraising bike-a-thon in the U.S., and now raises more money than any other athletic fundraising event in the country. In part, that’s because of the Challenge’s incredible efficiency—99 cents of every dollar raised by the more than 5,000 riders each year go directly to the Jimmy Fund.

“I also love how excited people get about the Challenge,” says Uta. “Despite riding as much as 192 miles in two days, the riders are so positive and have such a great attitude. There’s a real sense among the riders of, ‘We can do it—we will fight this cancer.’”

In 2006, Uta spoke at the riders’ dinner the night before the event started, and rode all of the first day’s 84-mile route. Now a two-day rider, she hopes that more people will join the PMC. See below for reports from the 2006 and 2007 Pan-Mass Challenge. To learn more about the Pan-Mass Challenge, including how to contribute, visit the ride’s Web site at www.PMC.org.

Another Magical Year at the Pan-Mass Challenge: Report from the 2007 Event 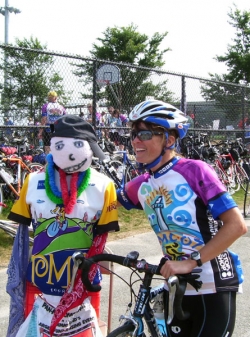 Two PMC friends at the finish line of the first day’s ride in Bourne. © private

The Pan-Massachusetts Challenge just keeps getting bigger and better. Bigger, in that in its 27th year, the two-day fundraising bike ride across Massachusetts drew more than 5,000 cyclists, by far the most in the event’s history. Better, in that the riders are expected to raise $27 million for cancer research and treatment through the Dana-Farber Cancer Institute’s Jimmy Fund. That figure, too, was an event record, and means that the Challenge has raised close to $200 million since 1980.

Tackling one of the first day’s routes, Uta rode 84 miles from Wellesley to Bourne. (Riders can choose to do one or both days, and have a choice of routes across Massachusetts. The two main routes cover 176 or 192 miles in two days.) “Although it was very humid the first day and tough on the riders, they all seemed to be in great spirits, encouraging each other the whole way,” Uta says. On the second day, the cyclists were blessed with beautiful riding weather of cool, dry air under a blue sky.

Uta received some above-and-beyond encouragement from two riders. “I got a flat,” she laughs, “and I tried to fix it but couldn’t. But I had luck! Two riders, John and Tom, stopped and fixed my flat. I later saw them helping other riders up a big hill. The ride has such a beautiful spirit of caring and support.” 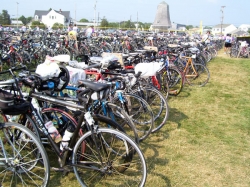 One of many bike parking lots. © private

During another stop—this one planned—Uta was reminded of the motivating force behind the riders’ spirit. “At the lunch place, we saw some of the cancer patients, the children being treated by Dana-Farber,” she says. “It was special to talk to them and to be that much more inspired for the ride.”

First held with just 36 riders in 1980, the two-day event was the first fundraising bike-a-thon in the U.S., and now raises more money than any other athletic fundraising event in the country. For more information, visit the Pan-Massachusetts Challenge Web site at www.PMC.org. To help Uta help others by fighting cancer, you can make an online donation at this address: www.PMC.org/eGifts/. When prompted for Uta’s eGift ID, enter UP0001.

More than 4,300 cyclists pedaled throughout Massachusetts last weekend to defeat cancer. The riders made up the largest field ever in the 26 years of the Pan-Massachusetts Challenge (PMC), which before this year had already raised $145 million for cancer research and treatment through the Dana-Farber Cancer Institute’s Jimmy Fund. With so many riders taking part this past weekend, this year’s fundraising goal of $25 million is sure to be met.

“We met so many wonderful riders along the way,” Uta said after riding 84 miles, from Wellesley to Bourne, on the first day of the two-day event. (The two main routes traversed 176 miles or 192 miles over the weekend.) “During the ride, we heard so many inspirational stories from the participants—how they were riding in honor of a parent, or a child, or a loved one, or a friend. And the crowds along the course were great. They were not just saying ‘Great job,’ but also ‘Thanks for riding,’ which meant so much.”

Uta was one of many public figures who supported this year’s Challenge. Three-time Tour de France winner Greg Lemond rode, as did four-time Olympic gold medalist speed skater Johann Olav Koss and Massachusetts senator (and cycling aficionado) John Kerry. At a 2,800-person riders’ dinner the night before the first day of the Challenge, Soul Asylum stopped by for an impromptu concert, followed by “American Idol” star Alya Brown.

“I so much enjoyed giving some inspiration to the riders for the next day,” Uta said about her speech at the riders’ dinner. “The whole evening was so beautiful. It really was a magic PMC event.”

First held with just 36 riders in 1980, the two-day event was the first fundraising bike-a-thon in the U.S., and now raises more money than any other athletic fundraising event in the country. For more information and to make a donation, visit the Pan-Massachusetts Challenge Web site at www.PMC.org.