Established in 1976, the American Liver Foundation is the largest nonprofit organization in the U.S. working on liver health and disease prevention. Since 1988, the New England chapter of the foundation has coordinated the Run for Research (RFR) team. 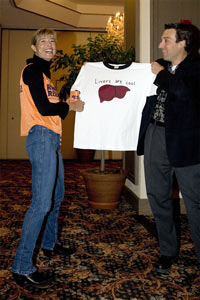 The team promotes awareness of liver disease and raises money to fund critical programs in research, education and advocacy. As an official charity of the Boston Athletic Association’s Charity Program, RFR runners compete in the Boston Marathon, sponsored by friends, family, colleagues and other contributors.

Thousands of members of the team have run Boston, and they have raised more than $11 million to fund critical programs in research, education and advocacy. “It’s such a beautifully organized foundation,” says Uta. “You can really feel the passion of the participants in the marathon program and the wonderful care for each other and the cause—Yes: Livers Are Cool.”

Uta met with the Run for Research team members six weeks before the 2005 Boston Marathon, offering training wisdom and encouragement. “Most important,” Uta says, “was emphasizing how to be in the best mental condition on marathon day.” In 2009 she talked to the team again at their pre-race pasta party to support the runners with last-minute tips and inspiration for the next day’s marathon.

Barry Chait, director of the foundation, said afterward, “Uta gave us all such a great boost. With just six weeks left for training, she made people feel they were on the right course for Boston and inspired them to try to raise more money.”

Wendy Lennon, executive director of the foundation, added, “Two hundred and fifteen people are going to run the Boston Marathon for the American Liver Foundation, and about 80 people were at the meeting with Uta. They are coming from all sorts of social backgrounds. They will all help to raise money for this project, and Uta motivated them to feel good about it and to feel that what everyone is working on is very important.” 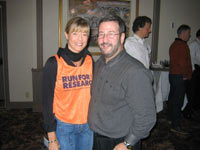